Is the fourth time the charm 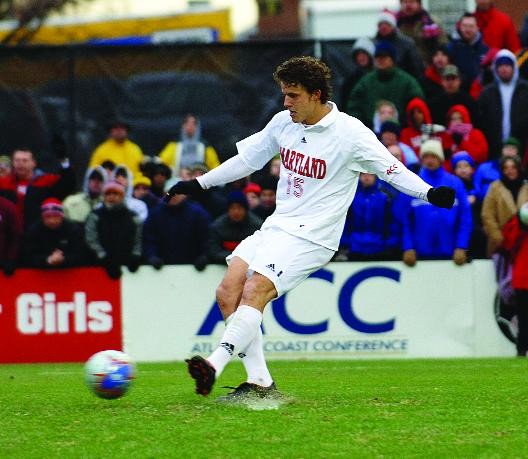 With a berth in the College Cup resting on penalty kicks, freshman goalkeeper Chris Seitz stalked to the goal, pumping his arms to encourage the freezing fans to get loud. He walked to each post, delivering each a kiss for good luck, and then jumped to touch the crossbar.

The first Akron shot came and Seitz correctly dove to his left, possibly tipping the ball before it rang off the post. When Seitz saved another attempt two rounds later, provoking the crowd noise to a new high, the game was all but sealed.

After Marc Burch nailed home the clincher, the Terps momentarily mobbed the senior forward. But it didn’t take long for the congregation, which quickly included streams of screaming students, to move to the difference maker – Seitz, who then sent the No. 1-seeded Terps storming to a fourth-consecutive final four.

Lifted by Seitz’s shut-down performance, the Terrapin men’s soccer team edged No. 9 Akron in penalty kicks, 4-1, in the NCAA quarterfinals Saturday after playing the Zips to a 1-1 tie. With the dramatic result, the Terps are headed to Cary, N.C., to face Southern Methodist Friday.

“I’m extremely proud of this program, and of this team,” Terp coach Sasho Cirovski said. “What we’ve accomplished now, with a fourth-straight trip to the College Cup, is remarkable.”

During regulation and the two overtime periods, the Terps failed to put away Akron, which met every challenge. And going to penalty kicks was not foreign to the Zips, as they won this year’s Mid-American Conference championship and advanced past Connecticut in the NCAA third round in shootout sessions.

“We felt good for sure just from having participated in it a couple of times this season,” Akron coach Ken Lolla said. “Yet they had the benefit of seeing it, which makes it sometimes tougher. [Seitz] was going the same way as [our players shot] the last game.”

“I was pretty much just trying to read them, and I got lucky,” Seitz said.

Going to penalty kicks for the first time since last season’s NCAA third round game against Creighton, Cirovski said the Terps (17-4-2) were prepared after practicing them at least once a week during the tournament.

Like Stephen King, Chris Lancos and Maurice Edu before him, Burch calmly approached the ball and drilled it into the net, clinching the Terps’ spot in collegiate soccer’s final four along with No. 2 New Mexico, Clemson and Southern Methodist.

Throughout the game, however, that spot was seriously being contested by the Zips (18-1-4). Despite falling behind 1-0 midway through the first half when senior defender Kenney Bertz drove in a shot off a free kick, the Zips did not panic.

Akron waited for a scoring opportunity to develop, and once it did, the Zips took full advantage. With just one minute remaining in the half, Justin Sadler freed himself on the near-side and dished a low crossing pass to Sinisa Ubiparipovic for the equalizing goal.

The second half and following overtime periods were marked by missed chances for both teams, with the Terps shooting themselves in the foot on multiple occasions as miscommunications led to turnovers. A Lancos header off a corner kick that sailed too high with about 10 minutes remaining in regulation may have been the Terps’ best shot.

Akron did not have too many chances, but an offensive flurry at the end of the second overtime nearly sent them to the College Cup. But two consecutive corner kicks were well-defended by the Terps, setting up the shootout.

“It’s a psychological moment there to make sure the players go into it with confidence,” Cirovski said. “And I think our players really accepted that challenge.”

Seitz undoubtedly did, and now the Terps have their biggest challenge ahead: advancing to the title game after falling in the semifinals three straight years.