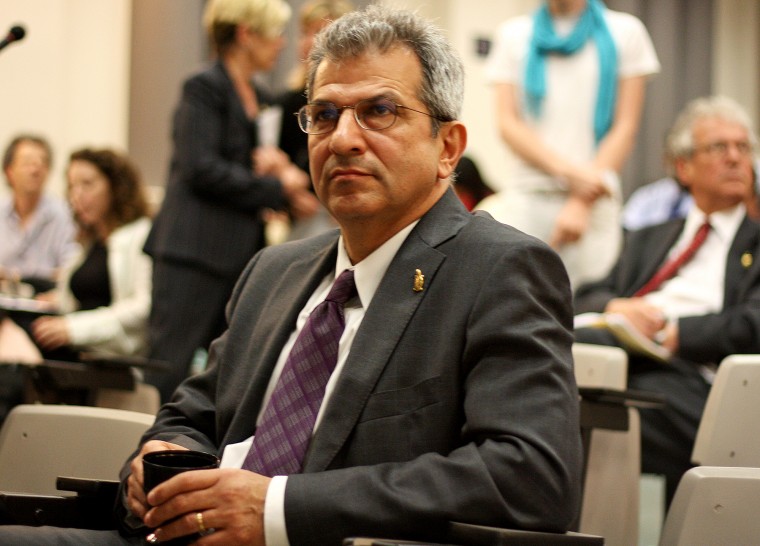 A new general education program was a major part of the university’s Strategic Plan, which Provost Nariman Farvardin was key in writing.

An earlier version of this story incorrectly identified Jordan Goodman as a graduate student. He is a physics professor.

In an overwhelming vote, the University Senate approved the highly anticipated General Education Plan with only one amendment, an act that officials said will propel the university into a new era.

The senate and Provost Nariman Farvardin charged the General Education Task Force over a year ago with overhauling the 20-year-old CORE curriculum to reflect the academic needs of students today. Yesterday, that plan was approved in a 67 to 9 vote — the final stamp of approval before the curriculum overhaul is sent to university President Dan Mote.

The plan’s passage was a defining moment in university history, officials said.

“Today was one of the most gratifying days of my life,” Farvardin told the senate immediately after the plan was approved. “With the program we just passed, you have helped the university enter a new stage. Not too many universities have the courage to revisit the undergraduate CORE program and put it through the system in the timely matter that we did.”

Several amendments were proposed throughout the two-hour senate meeting, but only one — dealing with how the program will be implemented — was approved.

Implementation has been a contentious issue throughout the plan’s review process, drawing the concern of university deans, senators and faculty members.

Under the plan, a committee will be appointed to deal specifically with implementation. The amendment that was passed, proposed by faculty senator Jordan Goodman, will allow the senate to again review the program and make changes after implementation is complete.

“We’ll work together to make sure the implementation is correct and then we’ll vote on it,” said Goodman, a physics professor. “If it isn’t working well, we’ll vote on that, too.”

Farvardin said the committee will be assembled in the next month to ensure the process moves swiftly.

“We want to move forward quickly,” Farvardin said. “We’re going to put several groups of people together. We’re very serious about this.”

Ira Berlin, task force chairman and history professor, said the amendment was on par with the spirit of the program.

“This amendment speaks to the way in which the program was created — as a work in progress that is constantly being tested against the ideas and experiences of this campus,” Berlin said. “The task force certainly hopes the implementation of this program will progress in the same kind of pragmatic way.”

Members of the task force said the reason so few amendments passed is due to the plan’s flexibility.

“This shows that the task force really tried to not be so specific that we’d put ourselves into something we couldn’t back up,” said Betsy Beise, a physics professor who served on the task force.

The new plan will go into effect in 2011. It adds two new fundamental studies requirements — one in oral communication and one in analytical reasoning — and significantly changes the distributive studies requirement, adding new categories while cutting down on the total number of courses required.

Incoming freshmen will no longer be able to use their SAT scores to place out of basic math and English requirements. The hotly disputed diversity requirement was expanded into two categories — Understand Pluralities in Society and Cultural Competency. Students will be able to take one UPS and one CC course or two UPS courses. Students will also be required to take at least two “I”-Series courses, some of which are already being offered.

Tom Cohen, a senator from the physics department, proposed seven amendments dealing with requirements of the plan and exemptions for students in the university’s Honors College — none of them passed.

Another amendment intended to reinstate the SAT math and English exemptions for incoming students was also voted down.

After hours of debate, mostly against the changes proposed, the senate moved to vote directly on the plan with the additional amendment. After it became clear that the plan was approved, the governing body that had been splintered by debate and frustration moments before broke into a unified applause.

“The task force is going to Disneyland,” Berlin said after the vote. “I’m personally elated. This is a great moment for the university. We’ve voted to make ourselves better. We know now that not just what we have is good but that we can make it better.”