Breaking down the rest of the Terps schedule 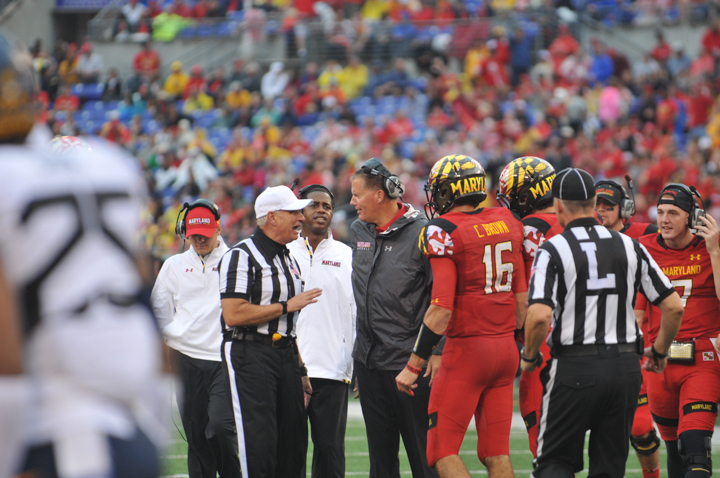 Coach Randy Edsall speaks to the referees during a timeout as the Terps shut out West Virginia, 37-0, on Sept. 21, 2013 at M&T Bank Stadium in Baltimore.

At 5-3 through two-thirds of the season, the Terrapins football team has already put together its winningest season to date under coach Randy Edsall. But with four games remaining on their schedule, the Terps have the opportunity to do more. Bowl eligibility — along with the team’s best record since 2010 — is at stake.

The Diamondback has broken down the Terps’ remaining four games with matchups to watch.

Breakdown: Syracuse, under first-year coach Scott Shafer, has been uneven so far this year. The Orange has scored more than 50 points twice in wins, but that was in games against Wagner and Tulane. Syracuse hung with Penn State in the season opener, but ACC play has brought only struggles, with the Orange’s only ACC win coming against N.C. State, which is winless in conference play.

Syracuse’s defense has struggled this year — allowing at least 48 points three times — and ranks second to last in the conference, allowing 29.0 points per game. Though the Terps offense is shorthanded, next Saturday’s blackout game at Byrd Stadium could provide the prime opportunity to clinch bowl eligibility.

Breakdown: The Hokies have been mercurial this year. While they sit in second place in the Coastal Division, they’ve won ugly. Outside of a 45-3 win over Western Carolina, they’re averaging 18.1 points per game. The defense, though, has been stout aside from a 35-10 loss in the season opener to No. 1 Alabama.

With the ACC’s top defense matched up against the depleted Terps offense and a tough Terps defense going up against a shaky Hokies offense, this matchup could be closer than some expect. The difference? Virginia Tech is hard to beat at Lane Stadium. And even though they dropped a game there last weekend to Duke, it’s tough to expect the Hokies to lose two straight in Blacksburg, Va.

Breakdown: Boston College has played tough against the top two teams in the Atlantic Division — Florida State and Clemson — but it’s also lost to North Carolina and a Southern California team that got its coach fired. So, it’s been an uneven season to say the least. The Eagles boast the conference’s top rusher in Andre Williams, who’s averaging 144.3 yards per game, and quarterback Chase Rettig has thrown 10 touchdowns and four interceptions.

The Terps have the conference’s fourth-best rushing defense, allowing 139.1 yards per game, so a matchup with Williams could present a great battle for the team’s front seven. As for the Terps on offense, Boston College ranks second to last in total defense, so the Terps skill players could have some big play potential out in space.

Breakdown: Under first-year coach Dave Doeren, the Wolfpack has a blowout win over Louisiana Tech, a slim victory over Richmond and a rout of Central Michigan to its credit. Meanwhile, N.C. State has fallen to Clemson, Florida State and Wake Forest, which are three of the better teams in the Atlantic Division, plus a loss to sluggish Syracuse. But quarterbacks Brandon Mitchell and Pete Thomas have battled injuries at times, so the Wolfpack has had trouble finding consistency.

Edsall’s first two matchups against N.C. State have had wacky results — a 27-point blown lead in 2011 and a missed field goal in 2012 provided two Wolfpack wins — so who knows what will happen when the two teams meet in Raleigh, N.C., at the end of November. But if the Terps stay healthy, it looks likely they have the potential to close a season with a win for the first time in Edsall’s tenure.