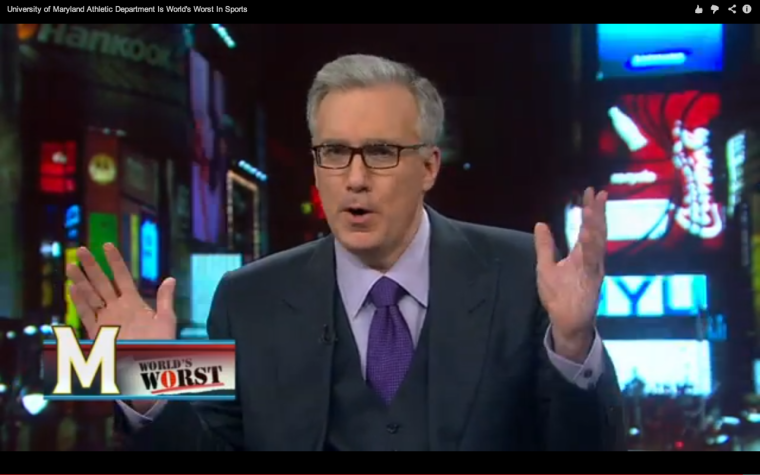 Keith Olbermann says, "There are no words."

Outside linebacker Marcus Whitfield said he didn’t receive a game ball because of NCAA rules but then the NCAA said he was allowed to but the rule the NCAA said didn’t exist actually was there, and it became a thing when it really shouldn’t have become a thing. And it led to Olbermann taking potshots at Edsall because he could, I guess.

Fast forward to Wednesday night, and this university once again found itself in Olbermann’s sights. Although this time, it appears there might be a little more legitimacy to its appearance on the late-night show.

Just before 3 p.m. Wednesday, the athletic department circulated a release about Saturday’s plans to honor former Syracuse football player Wilmeth Sidat-Singh between the first and second quarters of the Terps’ matchup with the Orange. In 1937, Sidat-Singh was forced to sit out a game between Syracuse and the Terps in College Park because of his race. Now, this university is trying to right a past wrong.

Washington-based writer Dave McKenna wrote a lengthy feature on the story for Washington City Paper in 2008, and he wrote on it again for Deadspin last week.

But there was a problem Wednesday: the athletic department’s release spelled Sidat-Singh’s name wrong.

And staff writer Alex Kirshner, who is writing a story on Sidat-Singh for Friday’s digital edition, picked up on it:

And that brings us back to Mr. Olbermann. At the end of his nightly ESPN show, Olbermann “documents the worst persons in the sports world.” It’s sort of tongue-in-cheek, as he introduces it by saying, “First the miscreants, losers and riff-raff, the unwashed and unloved. Don’t take it completely seriously, I don’t mean it completely literally, we just call them tonight’s worst persons in the sports world.” But sometimes (like the Edsall bit or his take down of CBSSports.com‘s Pete Prisco from August) it’s not.

In addition to the athletic department Wednesday night, it was a graduate assistant at Kansas State that thought of using free bacon as a promotion to get fans to come to a women’s basketball game and pigeons ruining soccer games in Germany by doing what birds do. In the video below, he brings up this university at the 2:07 mark.

After going through Sidat-Singh’s story, Olbermann points out the spelling mistake was repeated by a number of publications, both in the area and nationally. A quick Google News search (shown below) backs that up, though it appears the misspelling is a rather common mistake (for what it’s worth, the link listed from The Washington Post is an Associated Press story, not a Post story).

And in the end, Olbermann simply throws his hands up, shakes his head and says, “There are no words.”

Being called the “world’s worst in sports” for a simple (albeit important) typo might be a little harsh, but I guess that’s the way it goes these days — especially on sensitive subjects. Though I do think it does reinforce the point that the world needs more copy editors. Believe me, I know.

Check back Friday for The Diamondback’s digital edition and more on the Sidat-Singh story.