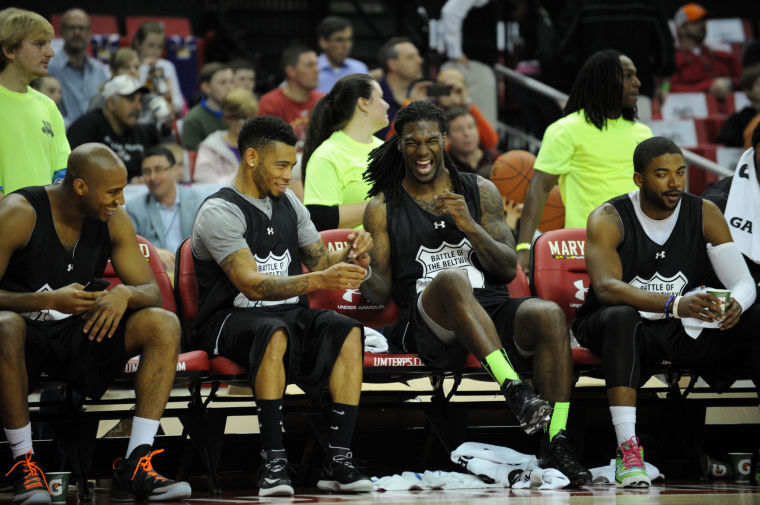 Former Terp LaQuan Williams and teammates have a laugh on the bench during the Battle of the Beltway celebrity charity basketball game on Mar 29, 2014 at Comcast Center.

Less than two years after Baltimore Ravens wide receiver Torrey Smith played in his last game at this university, his brother, Tevin Jones, died in a motorcycle accident on Sept. 22, 2012.

Despite the heartbreak, the former Terrapins football wide receiver suited up for the Ravens the next day, dedicating his two touchdowns and 127 yards to his late brother.

At Comcast Center on Saturday, Smith had another opportunity to honor Jones, presenting several scholarships to local students in Jones’ name at halftime during his celebrity basketball contest — billed the “Battle of the Beltway.” The event’s proceeds went to Smith’s and Washington Redskins linebacker Ryan Kerrigan’s foundations.

“Through the scholarship and through the help of others, it allows his name to live on,” Smith said. “He’s able to help others even though he’s not here.”

The Torrey Smith Foundation works to provide Baltimore youths with educational support and resources, while Kerrigan’s Blitz for the Better Foundation aids seriously ill and special-needs children in the Washington area.

Kerrigan and Smith each fielded teams replete with NFL stars, making for a competitive yet lighthearted atmosphere at Comcast. While the teams consisted mostly of players from the Redskins and Ravens, several players from other teams joined them on the court. Smith’s team of mostly Ravens defeated Kerrigan’s team in overtime.

“It’s so much fun coming out here to play, because I had hoop dreams,” Cleveland Browns cornerback Joe Haden said. “If I didn’t go to the league, I definitely wanted to be a point guard.”

Smith hosted an annual charity game each of the past three years, but this was the first time it was held at this university.

“It’s still kind of surreal in a lot of ways,” Smith said. “The biggest thing is that we’re able to help more people because of it. We were able to create a different kind of environment, more of a family feel this year.”

For Kerrigan, whose cousin is autistic, the charity game was a chance to raise money for a cause that hits close to home.

“That’s the goal of the foundation,” Kerrigan said. “Any time we can raise money to help fund it, help run it, help better people’s lives, it’s a good thing.”

While the play on the hardwood wasn’t as physical as games on the gridiron, the players made sure to put on an entertaining show. At one point, Hall went up for a layup, only to have it swatted away by Ravens quarterback Tyrod Taylor.

The contest ended when Ravens wide receiver Jacoby Jones hit a put-back layup in overtime. Jones raced to the other end of the court where he was mobbed by teammates.

“Everyone’s coming together for a great cause,” Smith said. “To help our community.”