GALLEN: In doing something different, Turgeon finally gets big win in close game 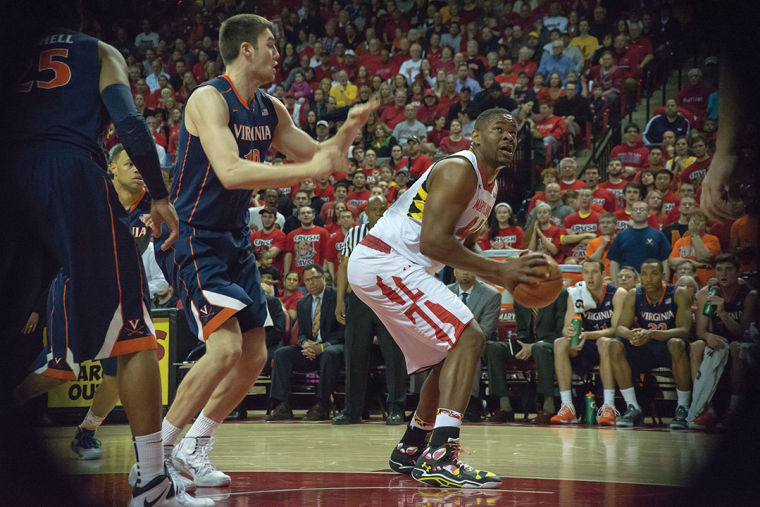 Center Shaquille Cleare dribbles underneath during the Terps' 75-69 upset of No. 5 Virginia on March 9, 2014 in the final ACC game at Comcast Center.

The clock ticked down late in regulation yesterday as the Terrapins men’s basketball team clung to a lead against Virginia, and fans started flowing from the student section and crowding around the edges of the court.

For a fan base starved of things to celebrate this season, an upset of the No. 5 Cavaliers in the Terps’ final regular-season ACC game at a sold-out Comcast Center would be the pinnacle of a season marred by disappointment.

But as Virginia forward Anthony Gill flew above the Terps on an inbounds play to send the game to overtime with a finish off a lob pass, another defeat seemed imminent. Virginia would surely join the likes of Syracuse, Duke, George Washington and Connecticut, who had handed the Terps heartbreaking losses this season.

And those fans hoping to celebrate the Terps’ first victory over a top-five team at home in more than a year turned, shocked and deflated, and started climbing back up the concrete stairs to their seats.

But as the Terps dominated the Cavaliers in overtime, something was different. There wasn’t a bad lapse, a cold stretch or one play that ultimately swung things the wrong way as had done so many times before. The Terps bucked the trend in their 75-69 upset, and coach Mark Turgeon was at the center of it all.

After forward Jake Layman hit two free throws with 4.1 seconds remaining to give the Terps a 64-61 lead, Turgeon ordered the Terps to foul to prevent Virginia from having the opportunity to hit a game-tying 3-pointer. It backfired, as guard Dez Wells tipped the miss on the second shot out of bounds, and Gill put the perfectly placed pass through the hoop with 0.5 seconds remaining.

“I don’t ever foul,” Turgeon said. “But it’s been the strangest year I’ve ever been a part of, and I did it backwards. I said, ‘Well, I’m going to do things backwards today because we haven’t won any close games.’ And we got to come up with the rebound and we didn’t.”

Turgeon also switched up his normal strategy at the end of regulation, as he was “trying something different because [he’s] been status quo all year.” It led to some botched possessions, such as when Layman was forced into a rushed 3-pointer because he didn’t know how much time was left and when Virginia closed a gap that had stretched to as many as eight points early in the second half.

But Turgeon deserves to be commended for his willingness to change things up on one of the biggest stages the Terps have played on this season. With program legends lining the court and hordes of alumni returning to Comcast Center for one last ACC game — not to mention a nationally televised noon tipoff — most of the college basketball world was focused on College Park.

So he eschewed convention he’d stuck to all season and reaped the benefits.

Guard Seth Allen’s broken foot prevented Turgeon from playing him alongside fellow guard Roddy Peters earlier in the season. But in the first half, guard Dez Wells picked up his second foul, and Peters came off the bench to play 10 minutes. He missed the only shot he took — a wide-open 3-pointer from the left wing — but turned the ball over only once while recording an assist and a steal.

Center Shaquille Cleare struggled recently, but he too gave Turgeon important minutes while forward Charles Mitchell battled foul trouble during the game. Cleare scored five points and made three of his four free throws while grabbing five boards and blocking one shot in a season-high 26 minutes. He also tipped out a crucial offensive rebound late in the game.

And once the game reached overtime, Allen took over. He scored the Terps’ first five points before Wells drove to the hoop and Layman hit four free throws to ice the game.

“All the stuff we’ve been through, it’s made us tougher,” Turgeon said. “It’s made us a lot tougher; it’s going to help us in the future.”

The Terps’ season might not last much longer with the ACC tournament later this week and a probable second straight bid in the NIT waiting next week.

But for one day, Turgeon and the Terps did things differently. And the fans were rewarded with a change of pace, too, as instead of leaving early and glumly walking across the campus, they flooded gleefully onto the court.