This one time at band camp 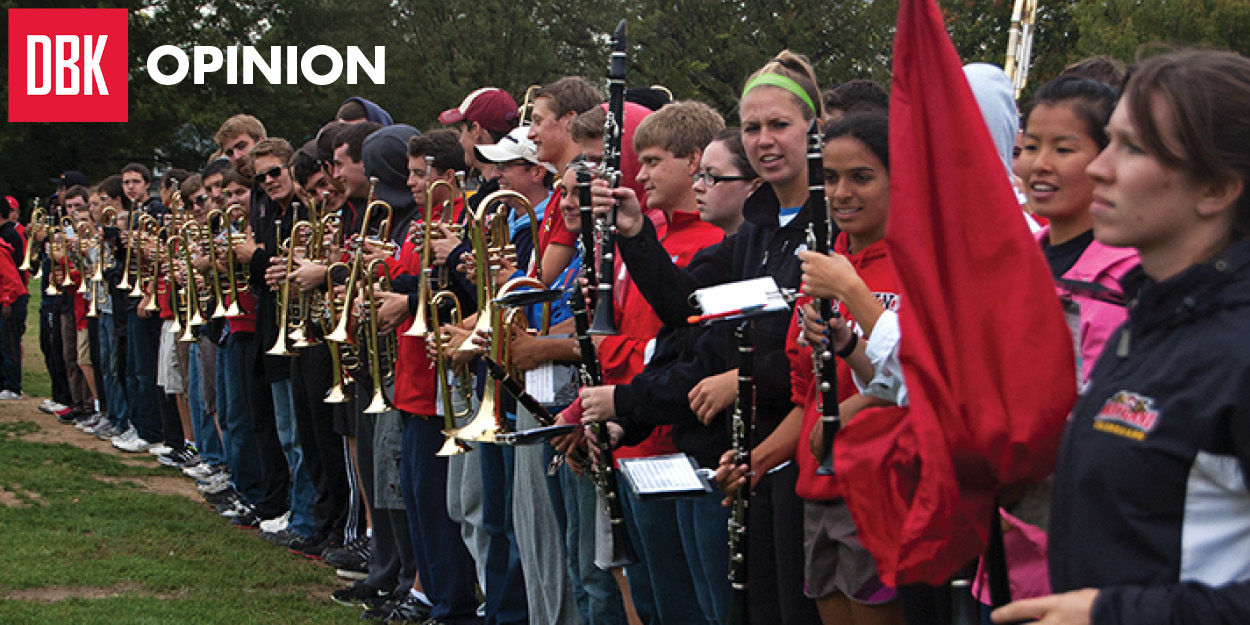 The Mighty Sound of Maryland

Sometimes, to truly appreciate something, you have to participate. As a mediocre former high school band member, I am disappointed when my friends and fellow spectators at Terps games scoff at my admiration for the Mighty Sound of Maryland at halftime. While I was only a bass drummer, dealing more in brute whacks than melodic finesse, the combination of sound, movement and effects during the intermission of every game never ceases to impress me.

While the vast majority of students watching and attending football games most likely have never participated in serious tackle football and would be shattered into smithereens by an oncoming linebacker, it is still easy to get excited by the action on the field. Whether or not you have had the pleasure of trotting for hours with a tuba on your shoulder or a drum bouncing off your chest, the same appreciation should be present when you see the marching band perform.

Like football players, the band members spend part of their summers on the campus, honing their skills in the hot sun. Long days of perfecting technique and mastering formations are the norm. Learning to march with proper formations and transitions requires the precision of a receiver running routes, the timing of a pocket passer and the footwork of a running back.

Each instrument is a unique contributor, unimpressive individually, but combining into a whole that is greater than its sum. The marching band wins every time it goes on the field. You’ll never see a marching band lose eligibility due to illegal benefits. The marching band never gets ejected for targeting. While Under Armour might not reinvent the band’s uniforms on a weekly basis, the Might Sound of Maryland’s classic elegance doesn’t need to change. Crab cakes and the marching band — that’s what Maryland does.

Marching band members might not receive the type of prestige that football players get, and there is no National Marching League that pays massive salaries to elite flutists. You won’t see fans lining up for autographs from the first chair clarinet. I couldn’t name the band director and you probably couldn’t either. That’s not necessarily wrong, but the band’s effort and dedication to impress fans is equal to the football team’s.

You know most of its songs, and the rhythms of the drumline cadences have been etched in your mind, but take a moment to appreciate the effort and execution that makes them happen.

During breaks in the game, look up from your phone and remember that the music isn’t always coming from the speakers. Years from now, when you remember being a Terp, a few sports memories will stand out. But they will all be tied together by the staccato brass roar of the timeless refrain “M-A-R-Y-L-A-N-D, MARYLAND WILL WIN!”

Daniel Galitsky is a junior economics and finance major. He can be reached at dgalitskydbk@gmail.com.