Univ. of Md. professors developing technology to detect depression in a voice 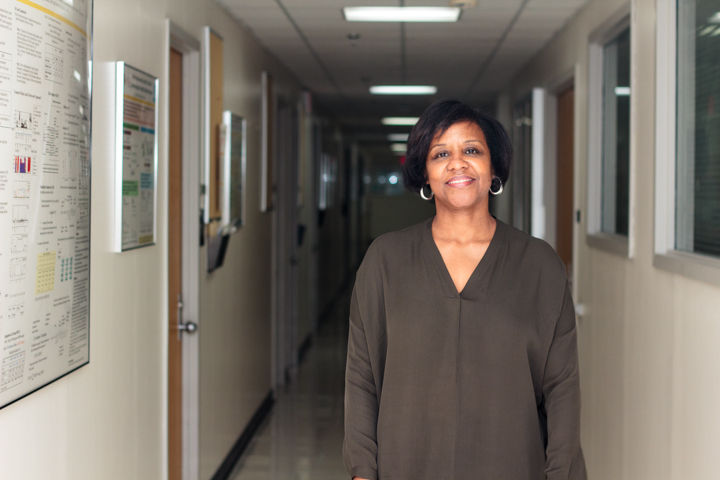 Carol Espy-Wilson is developing a technology to detect signs of depression in the tonality of a subjects voice, looking at characteristics like shimmer of the vocal cords.

If two university researchers are successful, your phone one day might be able to diagnose your mental health.

Using technology that can take measurements of various biological indicators, including vocal patterns, heart rate and facial cues, these researchers can determine whether an individual is depressed and whether they need further medical care.

Carol Espy-Wilson, an electrical engineering professor and a member of the Institute for Systems Research, studies the way that acoustic characteristics of human speech can reveal how people are feeling.

Normal speech follows a fairly standard form. Like a sine wave, normal speech charts as a series of periodic curves. But depressed speech falters from that, she said.

She collected a database of recordings of people suffering from depression, in which participants had made recordings of themselves talking and then filled out a survey for the Hamilton Depression Rating Scale, which is the most widely used measure of depression.

Because of that, Espy-Wilson knew which recordings corresponded to which levels of depression and could look for acoustic signals that differentiate depressed speech from nondepressed speech.

“What we did find that’s really interesting is your vocal chords vibrate differently when you’re depressed,” she said.

People with depression also speak in a “breathier” way, she said, comparing it to the voice of Marilyn Monroe. This is because their vocal chords don’t seem to close all the way, so more air gets through.

When people talk to one another, they can usually tell whether someone is not quite feeling like himself or herself, Espy-Wilson said. People pick up on patterns of voice that suggest their mood, but so far such patterns have not really been measured scientifically.

“Eventually there will be an app on your phone that will just ask you to talk for a minute about your day, and we’ll record the speech,” she said. Then the app will identify whether you are depressed and whether you should seek any kind of medical attention or an adjustment of medication.

Otherwise there is no easy way to determine quickly and objectively whether someone needs more attention, she said.

“I really wanted to help people who have issues with mental state to be able to monitor their mental health,” Espy-Wilson said, noting how it will identify whether they are clearly depressed or whether they are moving toward depression. “It’s important to understand that gray range, because if they’re clearly in a region where they’re not depressed and they’re headed towards being depressed, we want to help them be able to understand that so that they can intervene.”

Espy-Wilson’s research is part of a project funded by an ADVANCE Interdisciplinary and Engaged Research Seed Grant from the National Science Foundation and this university.

Monifa Vaughn-Cooke, a mechanical engineering professor, is the project’s principal investigator, and she also works with finding quantifiable signals of depression.

In their preliminary research, Vaughn-Cooke and members of her lab asked participants to answer questions about how they’re feeling, and then they look for different physiological changes, said Medhi Kohani, a doctoral candidate in mechanical engineering and a graduate research assistant in Vaughn-Cooke’s lab.

These include changes in heart rate, facial emotion cues, breathing rate and body temperature, he said. Then participants also fill out a Hamilton survey, and the researchers can correlate how depressed participants are feeling with these different physiological signs.

“We can combine all these features and tell you today you are 20 percent happier than yesterday,” Kohani said.

Vaughn-Cooke said this work also could be used in an app, from which external attachments could measure these physiological factors and inform users whether they are depressed or starting to become depressed.

“The idea is that someone has suicidal tendencies,” she said. “You don’t want to catch that the day that they start having that. You want to be able to predict, based on trend information, when they’re moving towards this, and you want to catch it before they reach this state.”

Vaughn-Cooke said she and Espy-Wilson plan to bring Philip Resnik into the project as they later pursue funding through the National Institutes of Health in hopes of further developing these methods of predicting and identifying depression.