KASINITZ: Will Likely’s tenacity makes him Terps’ model of success 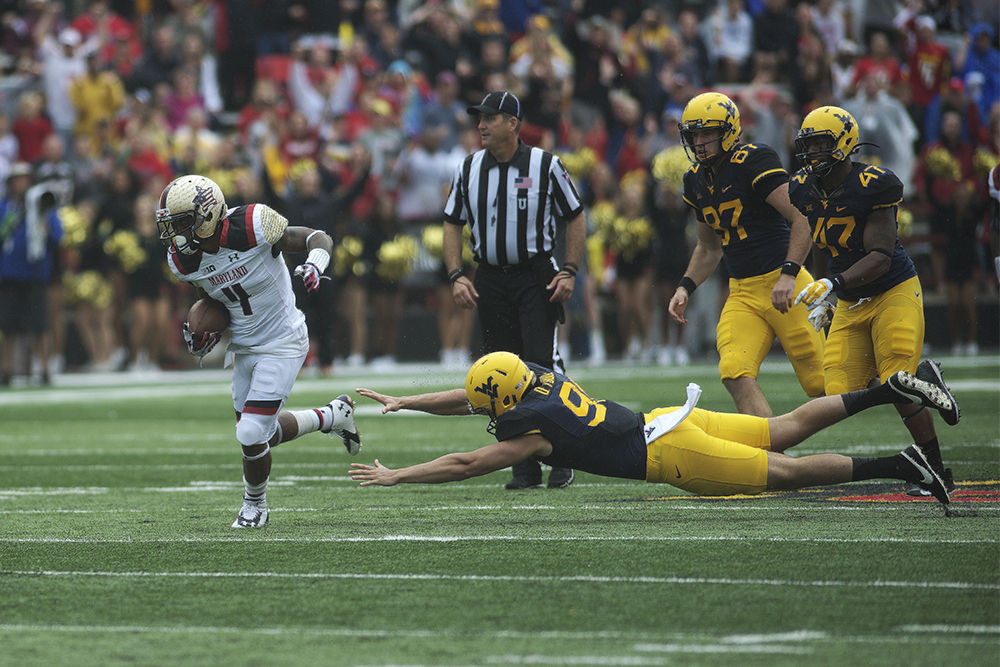 Defensive back William Likely evades several West Virigina tackes to score a touchdown during the Terps 37-40 loss against West Virginia on Sep 13, 2014 at Capital One field

If 5-foot-7 Terrapins football cornerback Will Likely was watching when 6-foot-5 Florida State wide receiver Kelvin Benjamin rose above Auburn defenders to grab the game-winning touchdown of last season’s national title game, he probably got a bit of deja vu.

Benjamin was a lethal weapon in the red zone all year for the Seminoles. Heisman Trophy winner Jameis Winston would often float high passes in Benjamin’s direction, and the current Carolina Panther would leap over smaller defensive backs to snag the ball. Benjamin finished the year with 15 touchdowns thanks to a play that was, essentially, unguardable.

College Park’s favorite squirt can tell you that from his high school experience with Benjamin. Though Likely gave up about 10 inches to Benjamin and was two years younger than the wideout, the future Terp often lined up against him in practices at Glades Central High School in Florida.

Benjamin typically used his size to best Likely, just as he did to so many corners during his college career. But Likely returned to the line of scrimmage to try to cover Benjamin again and again, regardless of how challenging and frustrating the task seemed.

It’s that tenacity that’s made Likely a fan favorite at Byrd Stadium and one of the most electric players in the Big Ten entering this weekend’s game at Syracuse. And Likely doesn’t just try hard. He’s a star on a team with aspirations of competing for a Big Ten title, and he’s a player the Terps need if they have any chance of approaching that goal.

The Terps’ 40-37 loss to West Virginia on Saturday would have been a blowout if not for Likely. The sophomore forced a fumble when the Mountaineers were driving deep in the Terps’ territory in the first quarter, halted another West Virginia drive with an interception and took a punt 69 yards for a touchdown in the fourth quarter.

“It doesn’t surprise me that he’s playing at such a high level because of the way he prepares and how he works,” coach Randy Edsall said. “That’s the difference.”

Likely spends extra time on the practice field and in the weight room, sure, but he especially likes watching film. The media asked Likely about these habits while speaking to him Tuesday.

“I watch film every day,” the soft-spoken corner said.

It turns out his film session was being interrupted.

“I just got done watching film for about two hours before I came here,” Likely continued. “I’m about to go back [to the film room].”

Still, Likely has natural ability to go with his grittiness and dogged work ethic. He’s quick and shifty and has tremendous vision, which is most evident on his punt returns.

Likely returned a punt for a touchdown in the Terps’ upset win at Virginia Tech last November, and his score Saturday against West Virginia tied the game at 37.

He averages 27.5 yards per return, which is the best mark in the country for anybody who’s returned at least five punts.

“It’s just my instincts,” Likely said, explaining his success. “Seeing things before it happens. Just catching it, and making plays. I can’t really explain it.”

But the reason Likely is the Terps’ most inspiring player, the reason he’s the kind of guy Edsall wants to build a program around, lies with those days he spent battling Benjamin at Glades Central.

“He has a lot of pride,” Edsall said. “That’s what separates him from a lot of these guys. He doesn’t want to get beat, and if he does, he’s going to figure out why he got beat and go back and make sure it doesn’t happen again. He isn’t going to hang his head; he is going to come back and do more.”