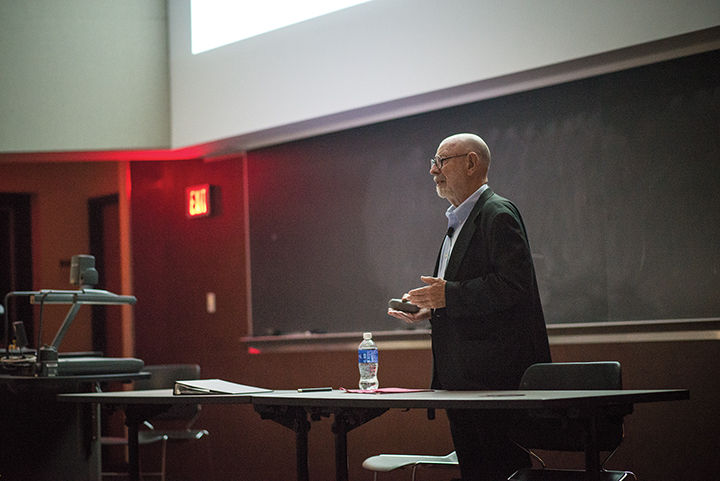 Photos of Peter walker speaking at the architecture lecture.

While Peter Walker delivered a guest lecture at the University of Maryland, a member of the audience asked him to explain the message behind the memorial he helped design after the 9/11 attacks.

“It’s a place where a lot of people look for closure,” Walker said. “It represents something very emotional — it’s very private.”

Walker is one designer whose architecture firm was behind the National September 11 Memorial in New York City. The landscape architect came to this university Wednesday night to discuss his design concepts and the process of the memorial’s creation to about 100 people in the Biosciences Research Building.

Walker, an award-winning landscape architect who has worked on other projects such as the Constitutional Gardens, the University of Texas and the Sony Center in Berlin for PWP Landscape Architecture, came to this university as part of a lecture series sponsored by this state’s chapter of American Society of Landscape Architects.

Walker mainly spoke about the process it took to come up with the idea for the memorial, as well as the people it pays tribute to.

“We’ve spent all of our conscious energy to rebuild this thing. Whether it’s a governor or a mayor … the urge to get back up on our feet and do this thing again was universally felt,” Walker said.

Architect Michael Arad designed the memorial pools for the site and recruited Walker and his firm to design the rest of the landscape. Walker and Arad won the memorial bid in January 2004 and began construction on the site in 2006, with a goal to make it be the site of a garden, park and a memorial, he said.

Walker’s design for the memorial to be surrounded by trees allows people entering the park from the South or North ends, to see the trees as a forest. But when an onlooker turns about 90 degrees, the trees look as if they are in straight lines, he said. These lines are meant to symbolize the designs from the bottom of the original towers.

Walker said one challenge was finding the right trees that would last longer than the average 10-year lifespan of trees in Manhattan. The team chose white oak trees, because they were the most likely to survive for a longer period, he said. He also made sure they came from the surrounding five states, because many of those remembered in the memorial had been commuting from nearby states that day.

The flowers and flags that are placed in the bronze slabs on the memorial makes the project more human and emotional, as well, he said.

The whole project was completed only recently — the last few trees were planted two-and-a-half weeks ago, and there will always be constant upkeep, he said. The lawns have already been replanted three times, and the ground cover has been replaced five times.

Stan Skalka, a co-founder of Victor Stanley Inc. and ASLA member, heard Walker speak at a conference in Michigan and invited him to speak. He introduced Walker before the lecture and spoke highly of his work.

“Peter is arguably one of the world’s best known landscape architects — and if he’s not, he knows who is,” Skalka said.

Walker said the response he and the team that designed the memorial received from families of victims made the project worth it.

The lecture “was very exciting,” said sophomore architecture major Njillan Sarre. “I remember seeing the memorial in 2011 before it was finished, and I haven’t been back. I like that it’s abstract; he gives me better insight into the architecture.”