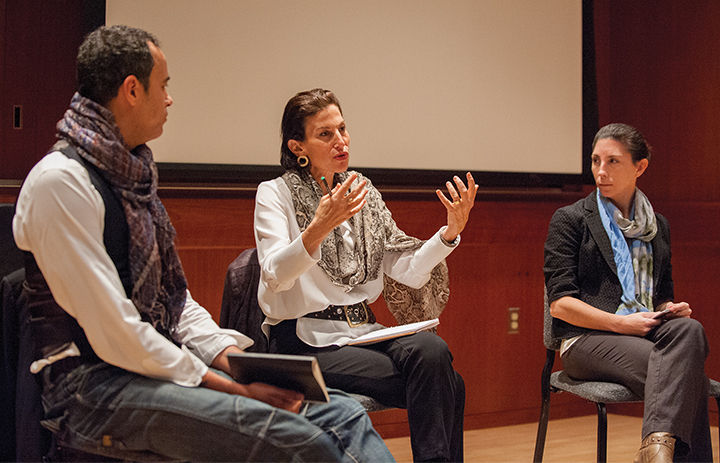 Deborah Heifetz (center), co-founder of BraveHearts International, speaks about her work bringing dance into conflict zones at a panel discussion on reducing hostilities through dance at the Clarice Smith Performing Arts Center Thursday.

Shawn Lent knows dance cannot solve every conflict. But in a world full of turmoil, it can be a good foundation.

“A lot of children know what war is and what looks like and feels like; they can draw it,” said Lent, a social practice dance artist and conflict management specialist who lives in Egypt. “But you ask them to describe or draw peace, they have no clue.”

During a panel discussion in front of about 40 people at the Clarice Smith Performing Arts Center on Thursday, Lent discussed the potential and practicality of resolving modern conflicts through the power of dance and movement. José Pascal da Rocha, a South African conflict resolution professor at Columbia University, joined her, along with Deborah Heifetz, an Israeli social anthropologist and founder of BraveHearts International, an education and mediation organization.

Each panelist has worked in hostile environments around the world, in countries such as Israel, South Sudan, Colombia and Germany, as an interventionist working to find and develop methods of conflict resolution through dance.

Junior dance and marketing major Kayla Coutts attended the event and said she was struck by the overall concept: that the power and strength of movement could help resolve that which can’t be explained with words.

“I’m not a dance expert, and I do not have the moves like Jagger,” said da Rocha, who led the evening’s discussion. “I am a peacemaker, a mediator, interested in how we can use dance and movement, whatever you want to name it, to transform things, to transform actors … to make change.”

Dance can be empowering and healing, Lent said. In her work with child cancer patients, she said, she uses dance to help them learn to trust their bodies and find beauty in themselves. She said she can see the difference dance makes in the quality of their lives.

“There’s something there, even if [they] have only six months left,” Lent said. “When you put on a costume and stand [in] front and say, ‘Yeah, we’re going to dance to Whitney Houston, and it’s going to be stupid jazz, but awesome stupid jazz,’ it’s great.”

But these mediators do not always use traditional dance in their work. Heifetz described her experience with Israeli and Palestinian soldiers during attempted peace negotiations. She said they were able to demonstrate a certain respect for one another through their movement patterns and body language, aiding the dialogue process.

“It wasn’t called dance, but it was this certain type of movement, this choreography that took place between them in the way they moved together and around each other,” Heifetz said.

Heifetz said it is essential to start by creating a safe space in the face of adversity, where people can share in expression and emotion, even if they come from two separate sides of a power struggle.

Pammi Bhullar, a manager in the Center for Social Value Creation at this university’s business school, said she attended the panel to gain insight into how she can use her own background to contribute to changes in violent societies internationally.

“I was really inspired by the courage of these individuals,” she said. “They are going into really dangerous situations and able to create peace in a very unique way.”

The panel was the first event in a series hosted by Karen Bradley, head of the master’s of fine arts in dance program, as part of the Dorothy G. Madden Professorship in Dance at this university.