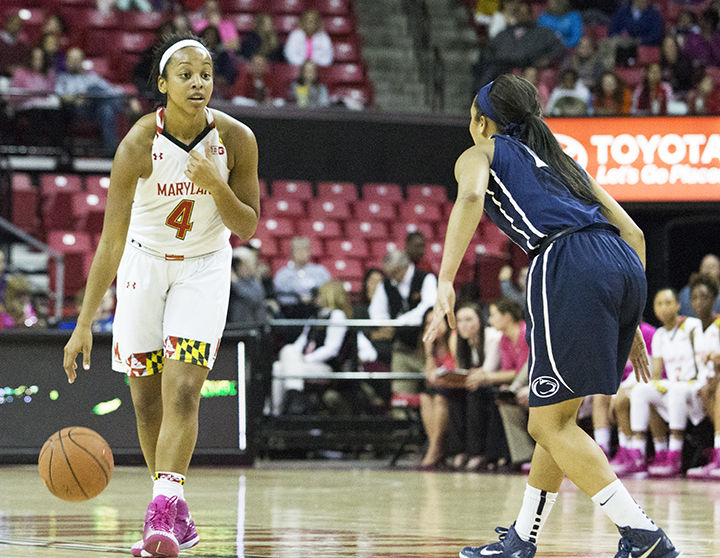 Laurin Mincy remembers sitting down with her dad to watch the 2006 NCAA women’s basketball national championship game. An eighth-grader at the time, she also recalls the Terrapins women’s basketball team trailing Duke, 70-67, with 15.4 seconds remaining.

Mincy watched as freshman guard Kristi Toliver took the inbounds pass, circled around the arc past two on-ball screens and took a stepback 3-pointer over 6-foot-7 Duke center Alison Bales. Toliver’s shot swished through the net to force overtime, where the Terps claimed their first and only national title.

“It was crazy,” said Mincy, a redshirt senior with the Terps now. “I felt it through my TV.

“Those moments that I remember of the game was why I kind of chose to go to Maryland. I love the excitement.”

It also marked the first time Mincy got a taste of the storied Terps-Duke rivalry. Now, for the eighth and final time in her career, Mincy will play the No. 4-seed Blue Devils when the No. 1-seed Terps meet them in the Sweet 16 on Saturday in Spokane, Washington.

Mincy and redshirt junior guard Brene Moseley are the only two Terps on this roster to have a win over Duke on their resumes. But the history of the matchup isn’t lost on the younger players.

“I know that we don’t like each other,” sophomore guard Lexie Brown said. “You go to Maryland; you automatically hate Duke. Even the regular students hate Duke.”

Brown was part of the Terps team that lost at Duke, 84-63, in the only meeting between the schools last season. And because the Terps moved to the Big Ten this year, many booked it as the ending of a long rivalry.

With some help from the NCAA selection committee, though, the teams have a chance to add another chapter in their first NCAA tournament meeting since the 2006 overtime thriller in Boston.

“It’s exciting,” coach Brenda Frese said.“At this point, you don’t have to motivate your team; you’re in the Sweet 16 and looking to be able to advance. But I think it does make it more dramatic to be able to play Duke.”

While the 13th-year coach got the best of the Blue Devils in the one that mattered most, Frese owns an 8-21 record against Duke since arriving in College Park. More than half of those meetings came in North Carolina, though, because the ACC tournament has continued to be held in Greensboro.

This will be the first time the schools have met on a neutral floor outside North Carolina since squaring off at then-TD Banknorth Garden in the 2006 title game.

“With us moving to the Big Ten and then having to go all the way across the country to play them is a little different,” Mincy said. “But we’re excited.”

The term “excited” was prevalent at practice Wednesday, especially given the way the Terps thought the rivalry was going to end. Instead, starting sophomores Brown, Shatori Walker-Kimbrough and Brionna Jones, get a chance to avenge last season’s 21-point shellacking.

“That was not fun for me at all,” Brown said. “To have that be my one and only Duke experience, I’m glad that we get to redeem ourselves.”

Much has changed since the national championship meeting nearly nine years ago. Duke hired a new coach in Joanne McCallie. Frese gave birth to twin sons, Markus and Tyler. And the Terps left the ACC.

But the passion remains. And thanks to the NCAA tournament, the rivalry lives on.

“Now I can hate them because I finally got to play,” Brown said.