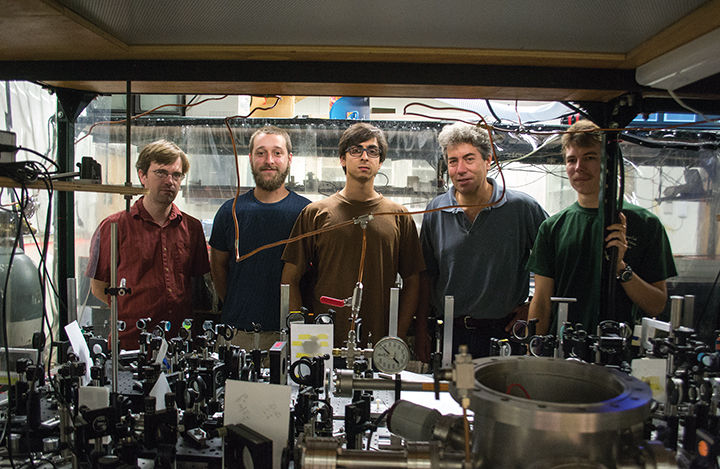 University physicists working in the Intense Laser Matter Interactions group have made two breakthroughs in recent months: One allows them to send high-powered lasers through atmosphere, and another uses this technology to collect weak signals from a distance.

The new technique, called air waveguides, can be used like optical fibers in the air, said group leader Howard Milchberg, a physics professor.

While working on another experiment, Milchberg said they realized the laser they were running at 1,000 volts per second was lowering the density of the air.

“What sort of blew our minds was that this hole in the air density was lasting for a really long time,” Milchberg said.

That “really long time” was about a millisecond, which is a lengthy duration for those working in a field where the typical laser pulse is a microsecond, a couple of nanoseconds or even a femtosecond, a quadrillionth of a second.

The researchers then discovered how to turn this low-density area into a continuous tube through which they could send another high-powered laser, which would not lose as much power over distance as in normal conditions.

Milchberg said he realized the air waveguide could be used to collect weak signals through the air.

“If you have something emitting weakly over here, you just run this ‘air tube’ over to it and then light comes down the tube to where your detector is,” Milchberg said.

Milchberg said using the air waveguides to “sniff” out improvised explosive devices or nuclear materials is one of the potential applications.

“Rather than the light [from a distance] expanding outwards and you get very weak signal here, you could put one of these waveguide structures and lay it down with your laser really close to the source,” said graduate student Eric Rosenthal, who worked with Milchberg on the project. “That would help enhance some of the signal that normally would go off in all directions.”

So far, the air waveguide has only been tested at one meter, and Milchberg said he is skeptical of its use in communications — an application he and Rosenthal both said has been proposed by scientists in the past.

First, Milchberg said, they would have to prove the air waveguide can work at distances greater than a meter. Second, he said he doesn’t think it would be an efficient means of communication, given the massive amounts of energy it would take to power the two lasers.

Neither Milchberg nor Rosenthal predicted any consumer-level applications of this technology yet.