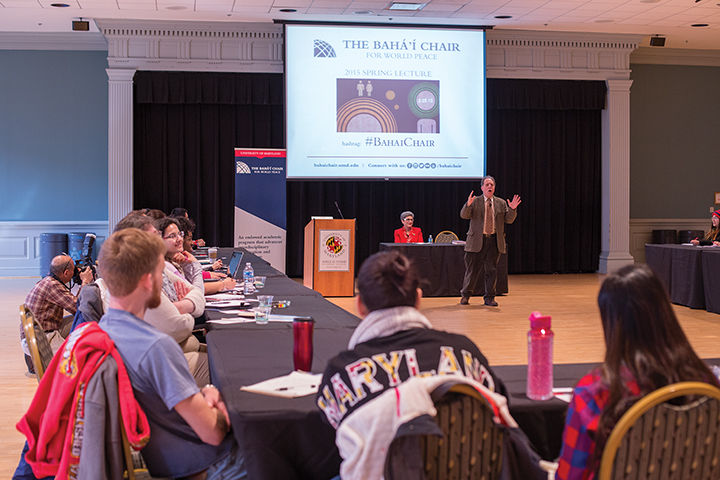 Sociologist Dr. Michael Kimmel spoke on the dichotomy between society's treatment of men vs. women at the "Mars, Venus, or Planet Earth?" Baha'i Chair Spring Lecture in Stamp Colony Ballroom on Wednesday, Feb. 25.

Sociologist Dr. Michael Kimmel spoke on the dichotomy between society’s treatment of men vs. women at the “Mars, Venus, or Planet Earth?” Baha’i Chair Spring Lecture in Stamp Colony Ballroom on Wednesday, Feb. 25.

In the quest to make the world a better place, a Stony Brook University professor at a lecture in Stamp Student Union Wednesday night said people must start by addressing gender equality issues.

About 45 students attended the lecture, which was led by Michael Kimmel, a sociology and gender studies professor at Stony Brook. The lecture, “Mars, Venus or Planet Earth? Women & Men on Campus in a New Millennium,” was part of a series called Solidarity Across Differences. The series, presented by the Bahá’í Chair for World Peace, focuses on the similarities that remain between people when social differences are removed.

“Unless we bring about more solidarity, it’s going to be hard to remove these differences that are sources of conflict,” said professor Hoda Mahmoudi, the Bahá’í chair for world peace.

“The goal is to see what we can do to make this world a better place, and students who are the future of the world have a very important role to play,” Mahmoudi said. “If we can have a conversation on campus about these major issues, we can bring about more solidarity to remove these differences that are sources of conflict.”

The program draws its principles from the Bahá’í faith, one of the youngest monotheistic religions. It was founded by Bahá’u’lláh in Persia  during the mid-19th century.

During Wednesday’s lecture, Kimmel said the conversation of gender equality had to begin by recognizing the fundamental changes in women’s roles during the past 40 years, including their integration into the workplace, balancing work life and a family and being entitled to sexual pleasure.

Kimmel also discussed how society’s definition of manhood has become distant from what is ethically defined as manhood.

“Most men have a conversation going on in their heads constantly between the two ideas of masculinity and what it means to be a good man,” Kimmel said. “In the United States, we don’t teach boys to become men. We teach them not to become girls.”

Criminology and criminal justice major Charles Carrillo said he had been discussing Kimmel’s book, Guyland: The Perilous World Where Boys Become Men, in his gender studies class. He was interested to meet the author and hear what he had to say on the topic of masculinity.

“Everything I summarized in class was what he spoke about, which was really interesting to hear,” Carrillo said.

Freshman criminology and criminal justice major Nicole Fowler heard about the lecture through her women’s studies class. She said she found Kimmel’s thoughts on sexual assault interesting because of its relevance to college campuses. During the lecture, Kimmel urged campuses to take a new approach when it came to engaging men in conversation about the issue.

After the lecture, freshman engineering major Miriam Silton said she enjoyed Kimmel’s emphasis on the responsibility of men in gender issues.

“A lot of times in gender studies, we just focus on women or just focus on a minority,” Silton said. “He really brought it back to how men have to change or white people change how they think in order to really support change.”