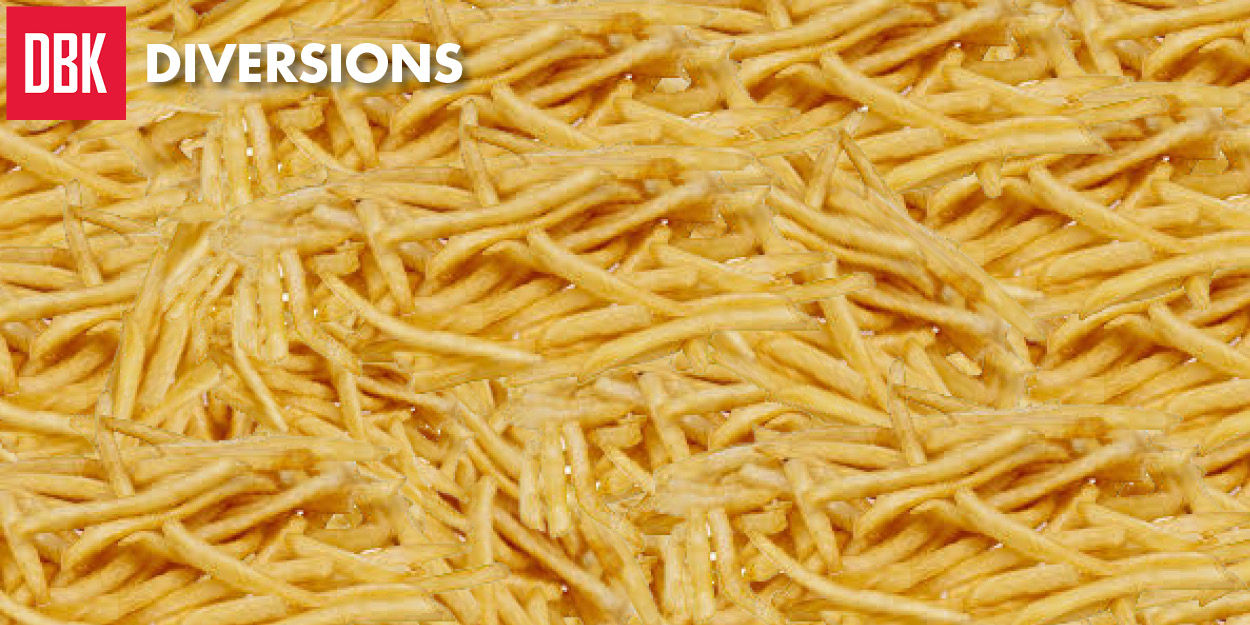 At 2:15 p.m. Friday, Bobby’s Burger Palace was quiet; only three parties were seated, eating a late lunch. The bar at the front of the restaurant was empty except for a few scattered papers. They all read the same thing: “Reserved for fry contest.”

Just 15 minutes later, the scene inside the burger franchise was drastically different. At the bar, the papers were gone, replaced by a group of 10 ambitious individuals. They excitedly swiveled back and forth on cushioned green barstools. That day, none of them were here for burgers.

The rules were simple: Eat an order of French fries, sweet potato fries and onion rings as fast as you can.

“Last year it was, like, how many fries you could fit in your mouth,” said Carley Sinert, a senior marketing major and Bobby’s Burger Palace intern. “This year, we thought we’d change it up a little bit.”

The interns brought out the food for the waiting contestants.

“Are you guys excited?” the interns asked the contestants before the competition. “Are you nervous?”

One yelled back his concern regarding the onion rings.

“That’s where I’m going to throw up,” he replied nervously.

After a 10-second countdown, the contest began and the scene inside the restaurant descended into chaos.

Contestants had different competitive eating tactics. Some immediately shoved entire handfuls of fries into their mouths; a few began with the onion rings, folding them in half; others favored a slow and steady approach, drenching individual fries in dipping sauces.

Hickman said this was his first time at a Bobby’s Burger Palace, though he had been in other eating competitions.

“I’ve done a couple over the years, but this is the first time I’ve done French fries or onion rings, so this was kind of new,” he said. “It was a lot more challenging than I thought it was going to be.”

Hickman said his original plan was to mash the fries into balls, but they didn’t break on impact as he thought they would.

“I was like ‘OK, new strategy, change the game,’” Hickman said. “I had to try to eat them like, say you’re grabbing a Snickers bar, like a fistful with it pointed vertically. I had to do that with each bite.”

Hickman said his main goals were to have fun and win the signed cookbook for his brother.

“He doesn’t know — this is going to be a surprise Christmas gift,” he said.

As for the gift card: “I think next time, I’m going to come and enjoy the burgers and maybe not the fries or the onion rings,” he said.

Third place became the most heated bid. A sudden resurgence of energy had four contestants vying for the title. Junior accounting major Edan Guter took it, winning a Bobby’s Burger Palace T-shirt and a jar of fry sauce.

After the third and final prizewinner had been declared, some contestants stuck around to finish their food. One cook offered them leftover fries — a proposition met with satiated groans.

“I think this year actually kind of worked out better [than last year],” Sinert said after the event.

“A lot of people came, and it was a great event,” he said.