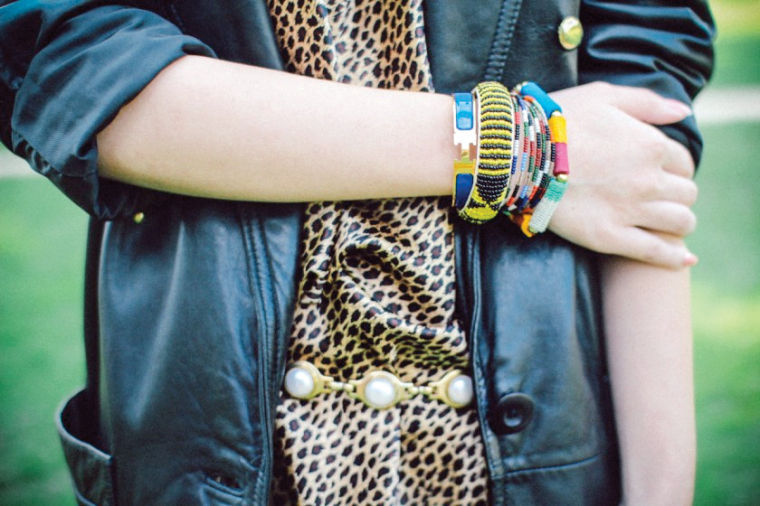 Evlove, a student-run clothing company, enables female students to sell and buy used clothes using a point system instead of money. Customers receive points based on the value of their submitted clothing that they can use to purchase clothes from other sellers.

Evlove, a student-run clothing company, enables female students to sell and buy used clothes using a point system instead of money. Customers receive points based on the value of their submitted clothing that they can use to purchase clothes from other sellers.

CORRECTION: Due to a reporting error, this article contained an incorrect quote. In addition, it included an incorrect major for Ayana Cotton. The article has been changed to reflect these corrections.

With clothes, shoes and about $400, Ayana Cotton thinks she can change the world.

Through her socially conscious startup company Evlove, which launched March 9, the sophomore enrolled in letters and sciences is encouraging others to evolve through online clothing swaps. Cotton found her inspiration for Evlove’s model from her time in the Occupy Wall Street movement and New York’s fashion scene.

Before transferring to this university, Cotton spent a year studying fashion merchandising at the Laboratory Institute of Merchandising College in New York, blogging about her experiences with fashion and activism. She knew, however, that her blog wasn’t getting much attention and wasn’t making the impact she’d hoped for.

When Cotton came to this university, she decided to redesign the concept around her personal blog, marrying fashion and social responsibility in a company she hopes will “revolutionize the way girls shop.” It’s the slogan printed on her business cards, her website, Facebook pages and fliers — it’s the goal she has for Evlove.

“It’s evolve spelled backwards,” Cotton said. “It’s a sustainable brand, a socially conscious brand — we have to evolve from our past mistakes.”

Clothes, shoes and accessories have a shelf life. Fashion-phile Cotton was tired of facing the same dilemma over and over again: A dress was too small or too trendy, but a new one was expensive, and she didn’t have the money to replace it.

If she donated something, she couldn’t be sure it actually made its way to a new user. Selling clothes online can be a hassle, and consignment stores don’t always give you your money’s worth, she said.

“I donated, like, a $200 dress,” Cotton said. “Donation maybe is as socially responsible as we think it might be, but it still hurts.”

Evlove is a low-cost, environmentally friendly way for college women to get new clothes and get the most out of the ones they already own, Cotton said.

At ShopEvlove.com, customers can order Evlove bags to stuff full of their unwanted clothing; those bags are free for now but will eventually cost $15.

Cotton will evaluate the clothes sent in and assign them a point value within a week, and donors can use the points they’ve earned to shop her site’s collection of items.

Those who don’t have much to send in can purchase 100 points for $20, but the idea, Cotton said, is to give and benefit from doing good.

To get the site started, Cotton went to thrift stores to purchase high-quality items from designers such as Marc Jacobs and Emanuel Ungaro, whose clothing can sell for hundreds, sometimes thousands of dollars. Shoppers can purchase those items on the site for less than 100 points, although donations don’t have to be near that caliber of retail.

“I probably would use it, but I think the points might limit me,” she said. “If there wasn’t anything on the site I wanted, I would only get points, and I think it might mislead me.”

Cotton will send clothes that don’t make the cut back to the donor on their dime or donate them to a women’s shelter.

“It’s something no one’s doing now, and I think girls will appreciate it,” Cotton said. “It’s definitely for the stylish, trendsetter, badass girl. It’s not the girl who walks into the store and just copies the mannequin. She makes trends her own.”

Orders are now on hold while Cotton works to gather donations. However, shoppers will be able to buy clothes, shoes and accessories starting May 3. Cotton said she hopes to expand Evlove to Georgetown University, American University and Howard University this summer. First, though, she needs to create a presence on this campus, and that’s been a struggle.

“It’s kind of hard to explain the concept,” she said. “I transferred from a school in [New York] and there was no campus, no grass, no frats and sororities … when I came here, there was no clear fashion community.”

So far, about $400 of Cotton’s money has gone into Evlove. It’s still small, with Cotton and her boyfriend, the company’s photographer, as the only employees.

Between classes and her job at Urban Outfitters, Cotton has been aggressive about building a social media presence and seeking out opportunities to promote her business. She created the website herself and participated in this year’s Cupid’s Cup, a startup competition hosted by the business school.

She also plans to partner with an arts group on the campus, Terpmode, which will be sponsoring her April 22 clothing submission event. Evlove will be at Terpmode’s spring showcase April 19.

“We liked the mission, and we wanted to show that our group was there to help … If you kind of like something but don’t want to throw it away,” she said, “at least it can go to somebody.”