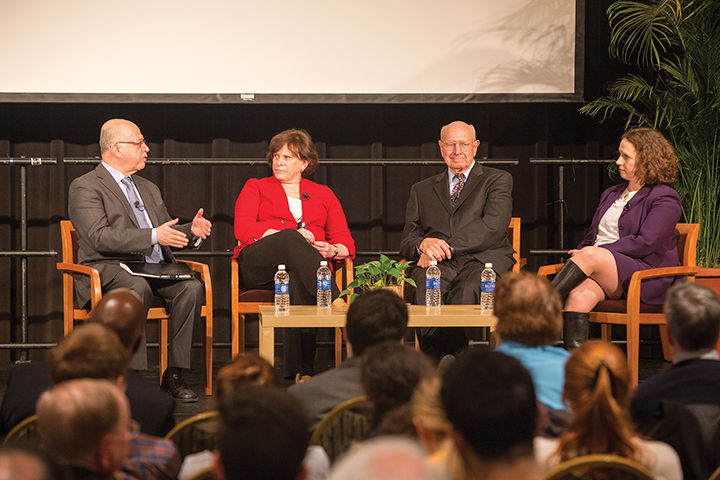 Israeli Prime Minister Benjamin Netanyahu stood before a joint meeting of Congress yesterday and declared that a deal with Iran regarding its nuclear program would be “a bad deal — a very bad deal” and would lead to Iran securing a nuclear weapon.

Hours later, experts at a forum at this university discussed emerging international negotiations concerning Iran’s nuclear program and the issues surrounding a long-term deal the United States and its allies are working on.

“I think we’ll all agree that the topic of this forum could not be more timely,” said Gregory Ball, the behavioral and social sciences college dean.

Shibley Telhami, this university’s Anwar Sadat Professor for Peace and Development, moderated the discussion. Telhami said Netanyahu gave a “forceful speech in which he made it very clear … that he opposes the kind of deal that is likely to emerge.”

While details of a deal have not yet been made public, three panelists weighed in on what could result from current negotiations.

Jessica Mathews, a member of the Iran Project and former president of the Carnegie Endowment for International Peace, said some Iranians oppose a deal because they would profit either politically or economically from isolation, while others believe the country would be better off if a deal is achieved.

She added that a large number of Iranians “are tired of being international outcasts.” In November 2013, President Obama announced an initiative to begin the process of negotiations involving lifting the 34-year-old economic sanctions on the country.

“Both sides are working hard to get a deal,” Mathews said. “The hardest nuts to crack are not in the room; they’re in Jerusalem and Washington and Tehran, the people who oppose a deal.”

Suzanne Maloney, a senior fellow in foreign policy at the Center for Middle East Policy at the Brookings Institution and a former U.S. State Department policy adviser, said opposition from Congress, Netanyahu and others is more about larger regional issues than the deal itself.

Some people feel that if the international community removes economic sanctions and achieves a nuclear deal without solving other long-standing debates regarding Iranian intentions, those intentions could worsen, Maloney said.

After questioning which alternatives were available, she also said the international coalition pressuring Iran is “unprecedented” and cannot be sustained in the long run.

Thomas Pickering, a longtime ambassador and member of the Iran Project, called Netanyahu’s speech to Congress “a mistake” but said it would be an “equally stupid mistake” to exclude Israel from further talks about the issue.

“We need to be above that,” Pickering said.

“Your views are important to be heard in Congress now, very important,” Mathews said.

Freshman government and politics major Sam Koralnik, who is from Massachusetts, attended an American Israel Public Affairs Committee policy conference and lobbied his congressman for a stronger U.S.-Israel relationship. He said the panel brought valid points to light, but disagreed with the negative representation of Netanyahu’s speech.

“A leader has the obligation to, when he feels his people are under threat, to come out and speak, and that’s what he did,” Koralnik said. “He did what he thought was best for his people.”

Freshman ecology and evolution major Akiva Gebler said he supports a deal that imposes permanent bans on Iran’s enrichment of uranium. He said a deal without these measures would threaten world interests, and Iran has not taken measures to gain trust in the region.

“[The panelists] really sort of sidestepped some issues,” Gebler said. “What has Iran done to deserve a lessening of sanctions?”

Freshman government and politics major Zach Atran said he is interested in issues regarding Iran and how they could play out in the future.

“There was definitely a focus on how the future of negotiations could go, and I think there was a lot of hope here, which I think is reassuring for a lot of people,” he said.