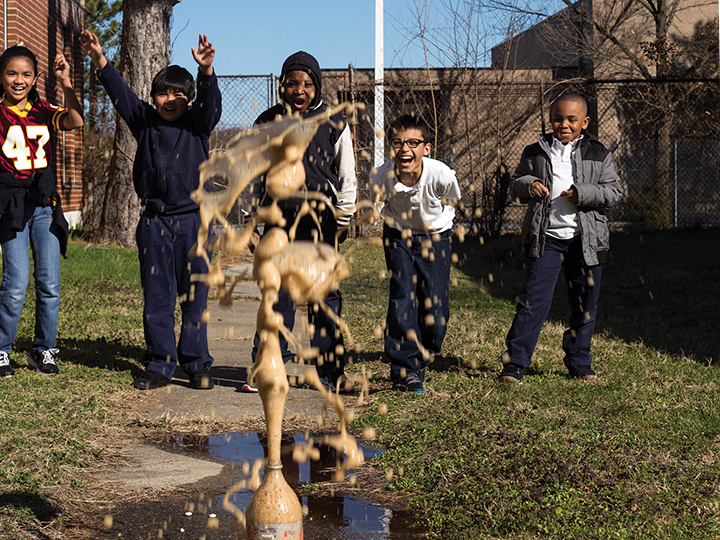 Members of the Geography Club, the Theta Tau engineering fraternity and the Men’s and Women’s Choruses traveled to Paint Branch Elementary School yesterday to engage students in after-school activities.

The trip was the first organized by volunteers from the Community Pipeline, a new student organization that allows on-campus groups to plan and run after-school programs at local elementary and middle schools.

Nick Henninger, the organization’s co-founder and president, said he originally had the idea at a meeting for AshokaU TerpChangemakers, part of a multi-university group focused on generating social change.

“We were discussing ways to get involved in community service, and the idea of mentoring about entrepreneurship at a local school came up,” he said.

Henninger said he was able to secure partnerships with local schools and the Department of Transportation Services to make his idea a reality. The sophomore economics major said every student group has something unique to offer local students, and he hopes to recruit more volunteers going forward.

This week, Paint Branch students participated in engineering, mapping and sing-off clubs. Each was organized by a group of volunteers who led discussions and activities for the students.

Headed by sophomore civil engineering major Esanye Ogbe, the engineering club volunteers taught students about the scientific method and applied it to an experiment in which they dropped  Mentos into sodas to see how they reacted.

When Ogbe asked the students why they wanted to be a part of this club, fourth-grader Kellan Martin said: “Because I’m going to be an inventor when I grow up,” and added that he planned to create a flying car.

In the mapping club, students were able to identify different places around the world using globes and maps. Senior environmental science and policy major Allison Bowman said she was glad to be involved in the project.

“I thought it would be interesting to work with kids in the field of geography,” she said. “I didn’t get a lot of geography education in school growing up. Especially with geography being a growing field, I think it’s a good thing to bring to elementary school students.”

Bowman said this first trip was difficult because volunteers had not planned for the lack of Internet access they encountered, but the students were still engaged in the activities. She thinks it will be a successful club once everything is “more worked out.”

Susan Walls, a music teacher at Paint Branch Elementary and supervisor for the after-school Community Pipeline programs, said she was excited about the Community Pipeline and grateful the volunteers were willing to help teach students something new and fun.

Walls said she was happy a music component had been included in the program too. Students in the sing-off club practiced keeping tempo and singing scales, conducted by senior aerospace engineering major Brian Huber.

“I love it. I think it’s a wonderful opportunity for the children to have extracurricular activities like this that they can be a part of,” Walls said. “Next year we will definitely expand the program. We have seen a lot more interest already.”

Walls said she was glad Paint Branch Elementary has maintained such a great partnership with this university and that she looks forward to the Community Pipeline’s future efforts at the school.

When it launches full-scale in the fall, the Community Pipeline will offer service opportunities for 2,000 to 3,000 students at this university each year, Henninger said. More than 160 student organizations will be able to register and lead the two-week-long after-school programs.

“The Community Pipeline will change the way that this university connects with its local community,” Henninger said. “It represents the idea that if each person does a little bit — maybe only a few days of service throughout the course of a school year — we can change lives and improve our communities drastically.”