Michal Cekovsky continues to adjust to new life with Terps 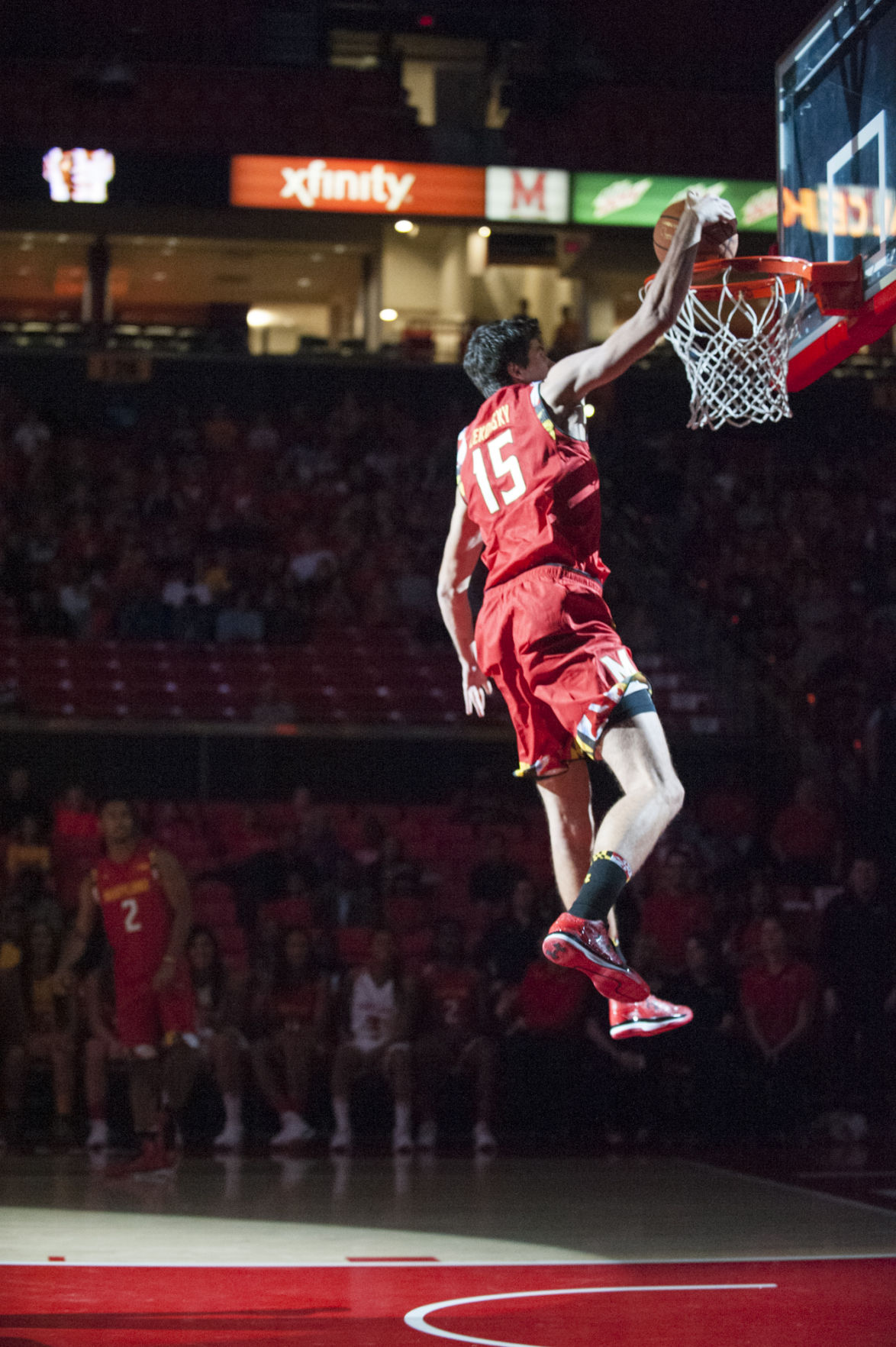 Michal Cekovsky tries to speak with his mom every day, but that’s not always an easy task.

The Terrapins men’s basketball forward continues to learn English in classes each weekday until about 3 p.m., and he often slips in a call home before he heads to Xfinity Center for practice and weightlifting. But Cekovsky’s native Slovakia is six hours ahead of Eastern Standard Time, and his mom usually goes to sleep before the phone rings.

“I don’t have too much time to talk with her,” Cekovsky said at last week’s media day, “but I’m trying.”

As the 7-foot-1 Cekovsky adjusts to life on a new continent and struggles to reach his mom before bedtime, he’s also working to become an impactful player in the Terps’ lineup. He’s likely to play significant minutes this season as a 20-year-old freshman, and he figures to be a key component on a team looking to return to the NCAA tournament for the first time since 2010.

Coach Mark Turgeon said Cekovsky has a chance to be a “great player,” and that he was ready to play immediately upon joining the Terps. That wasn’t the case with the last Eastern European 7-footer Turgeon lured to College Park, 2013 NBA lottery pick Alex Len.

In fact, Turgeon said Cekovsky was different from Len, a Ukraine native, in several regards. Len is the more naturally gifted player, the fourth-year coach said, but because Cekovsky is older and more experienced upon his arrival, the coach expects the Slovak to put up better numbers in his freshman year.

“They’re both similar because their confidence level is a little shaky with their English and all, but Cheko is way ahead of Alex,”Turgeon said. “Alex said ‘Gatorade’ and ‘chicken wings’ when he got here. Cheko you can have a conversation with, so he’s much further along. Alex was 18, Cheko’s 20. It’s a big difference.”

Cekovsky’s ability to communicate with his teammates about things beyond sports drinks and bar food has helped him feel comfortable stepping into an important role.

After forwards Shaquille Cleare and Charles Mitchell transferred in the offseason and forward Evan Smotrycz fractured a bone in his foot, Cekovsky sits as one of the Terps’ top options in the frontcourt as a Nov. 14 season opener with Wagner approaches. Cekovsky said he’s had to adjust to a new tempo of basketball with the Terps but hasn’t changed his individual style much.

“It’s a little bit faster than I played Europe,” Cekovsky said. “The game’s really up and down, up and down. I have to think fast on the court.”

Cekovsky also has been challenged while settling in off the court. He’s adapting to a new culture, eating unfamiliar food and making friends who speak a different language.

And though his English is better than Len’s initially was, he’s using a trick to ease his transition to the United States that the current Phoenix Suns center once employed.

“I try to watch movies with English subtitles … to learn grammar and the accent,” said Cekovsky, whose favorite film is Inception. “It’s really helpful.”

It also helps that Cekovsky is accustomed to living away from home. He spent last year at a basketball academy in the Canary Islands and the two previous years living at a boarding school and playing hoops in Serbia.

The United States presents a unique challenge because the culture is drastically different, and he’s the only European on the Terps roster. But Cekovsky said he’s glad to be in College Park because it’s a step toward his greatest goal.

“So many players from Europe who did a great job in college and now they are pro in the NBA or they go back Europe to play,” Cekovsky said. “I want to do exactly the same thing.”

Cekovsky did, after all, come to this university in part because he wanted to replicate Len’s success.

If the Slovakian big man does follow the same path and reach the professional ranks, he’ll have plenty to discuss on his phone calls home. Until then, as he deals with his mom’s early bedtime and adjusts to American life, Cekovsky has another source of support.

“It’s a little bit tough,” Cekovsky said, “but Maryland basketball, everybody try to help me, so I feel like this is my second family.”