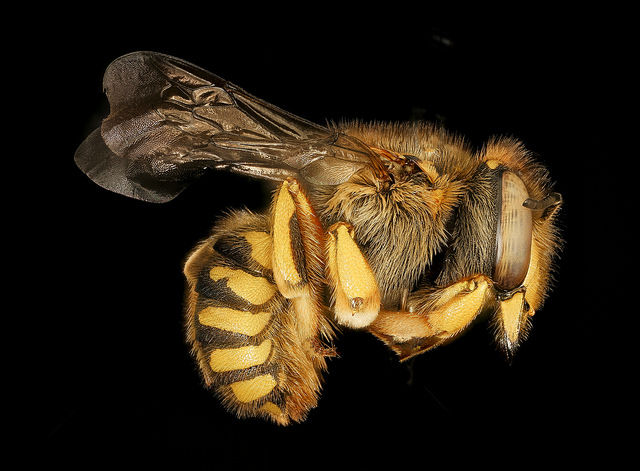 An Anthidium manicatum is one of many bee species living in the eastern U.S.

An Anthidium manicatum is one of many bee species living in the eastern U.S.

A University of Maryland graduate student is collecting data to map which bees visit certain flowers, which could eventually aid scientists in identifying patterns for different groups of the pollinating insects.

Olivia Bernauer, an entomology graduate student who works in professor Dennis vanEngelsdorp’s Bee Lab, has been working on this project since May and is now collecting the results.

“There are a lot of different species of bees,” Bernauer said. “A lot of people think honeybees are the only ones. They don’t realize solitary bees [bees that don’t live in colonies] are out there. Hopefully this can be used to get information on solitary bees and educate people about them.”

Bernauer and team members she trained observed about 9,000 bees during the research period, from June until the first hard frost this fall. About 425 bee species have been identified in this state, Bernauer said. These species fall into 10 groups, of which bumblebees are the most commonly seen.

They observed that certain groups of bees preferred native plants to non-native ones, she said.

However, the specifics of the research won’t be known until the data is complied, which Bernauer said is her next goal and should be finished by the end of December.

For this pilot study, Bernauer trained about 50 volunteers from May until June, teaching them to identify different bee groups and letting them collect their own data on specific flowers and the bees that visit them. By the end, there were 15 participants.

The volunteers Bernauer worked with came from the Master Gardener Program, which caters to individuals, usually retirees, who are interested in gardening and the environment. The program is offered nationally and is usually connected to a local university, as with this state and this university.

“It is a combination of outreach and information in that she is training people in how to identify specific wild bees that are native to Maryland,” said Carin Celebuski, the university arboretum volunteer coordinator. “There is not a whole lot of attention paid to specific bees. I think that this research is great.”

Bernauer worked with Prince George’s, Montgomery and Baltimore counties this past summer and said she hopes to add three more counties each year until the entire state is involved. Each county has a Master Gardener headquarters, where the research took place in the first three counties.

“A lot of species and groups are not well monitored,” Bernauer said. “Hopefully if we have long-term data from this, we can see how populations change over time.”

There will also be a new pollinator garden on the campus next year, which Bernauer will monitor for at least its first year.

“I’m really excited about her project and how it is getting people excited about bees and making the campus and surrounding areas more bee-friendly,” vanEngelsdorp said.

Now that the pilot program is completed, Bernauer is assessing how data collection can be improved. She plans to increase training for volunteers to make the program similar to a class, so members could all meet more often to discuss how the research is progressing, she said. She said she hopes to work with the Master Gardener Program again.

“The biggest thing I want people to understand is that there are more bees than just honeybees,” Bernauer said, “and that what we know about honeybees cannot necessarily be generalized to other types of bees.”

The research will continue in the spring, Bernauer said, and will be looking at different groups of butterflies in addition to bees.