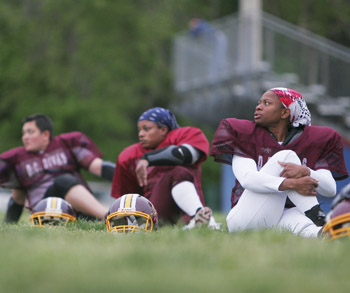 Feh Gwanyalla grew up in Cameroon, where the only form of football she ever played was soccer. She moved to Maryland and attended the university as a teenager, and on Saturday nights, the 1999 alumna either visited family or went to Hoff Theater with friends to live what she called “the typical dorm life.”

Now, Gwanyalla, along with five other university graduates, is a member of the D.C. Divas. For the next two months, her Saturday night activities include tackling other women and preventing a red, white and blue football from crossing her team’s goal line.

The Divas, who wear Redskin-like burgundy and gold and play games adjacent to FedEx Field in Landover, are an all-woman tackle football team that just kicked off its seventh season.

After going 8-0 in three consecutive regular seasons and winning last year’s National Women’s Football Association championship, the Divas are now in the premier full-contact football league in the country.

And in their first game as part of the 28-team Independent Women’s Football League, the Divas made an early statement by beating the New England Intensity 70-0 last Saturday.

Much of the franchise’s success has come thanks to six former Terrapins, some of whom were student-athletes and some whom have athletic careers that are just getting started.

n Who are the Divas?

Allyson Hamlin said she learned about leadership from playing catcher for the Terps’ softball team in the late ’90s. She loved playing flag football but didn’t want to join the Divas in its inaugural year because she didn’t think the league would last. Hamlin said she quickly realized her mistake and decided to give the league a chance.

She is now a team captain in the midst of her sixth season as the Diva’s quarterback.

“It’s definitely the greatest team I’ve ever been a part of,” Hamlin said.

Every woman has her own unique story about how she began playing for the Divas. One thing they all have in common, though, is that none of them, while still at this university, ever imagined she would be playing football three times a week when she grew older.

Subrena Rivers, who is now a D.C. police officer, helped the Terps women’s basketball team to its first-ever final four appearance in 1989. She finished her career in the Terps’ top ten in assists and rebounds and hoped to play for the Washington Mystics in the WNBA.

Out of 300 people at her tryout, she was one of the final 20 to be vying for a roster spot, but she injured her knee and lost out on her opportunity to continue playing professionally.

“When I stopped playing basketball, I was thinking ‘what else can I do?'” said Rivers, a defensive end for D.C. “And then they came up with this league and I said ‘I can do that.'”

1995 alumna and trauma nurse Stacey Michael found out about the league five years ago when one of her current teammates came into the emergency room and noticed that Michael, who was training for a body-building competition, looked incredibly fit. After a simple suggestion to join the Divas, Michael was quickly hooked. Now the defensive lineman nicknamed “ER” lives an ironic life – she hits people on the field, and helps heal people in the office.

Although her occupation is how Michael found out about the team, players’ jobs often conflict with their athletic escape. The league offers no pay to players; in fact, team members each have to spend upwards of $400 on full equipment, not to mention a $20 league fee.

Because of this, jobs must come first, as much as the women would prefer otherwise.

A blue Toyota RAV4 pulled into a parking lot at the Upper Marlboro Recreation Center where the Divas practice every Tuesday and Thursday night. Out stepped Gwanyalla, dressed professionally, wearing a pink blouse and black skirt. Minutes later she was back in her car changing into full football-garb for the upcoming practice.

Gwanyalla, a financial analyst at Freddie Mac, had just come from work, as most of her teammates also do to arrive on time for the 7 p.m. practices. But sometimes, the players aren’t so lucky, and have to decide between work and play.

“Usually when it conflicts, work takes precedence,” Gwanyalla said. “Everyone in my group, including my boss, [has] been very supportive. He basically knows when I have practice or have to go to away games, so we try to get my work done ahead of time.”

While Gwanyalla may have looked odd changing from dress clothes to a uniform, she did not receive as many strange looks as former Terp track star thrower Labelle Hillgrove undoubtedly does each day. Hillgrove takes the Metro from Greenbelt sporting her shoulder pads and three separate bags with changes of clothes.

Hillgrove is a social worker in Fairfax County and says the almost two hours it takes her to get to practice is “well worth it.”

“I’m a gentle social worker by day and an aggressive football player by night,” the defensive tackle said.. “It feeds both egos.”

Regarding her own life, Hamlin, a detective for the Prince George’s County Police Department said, “When I’m not working, I’m playing. When I’m not playing, I’m working.” On one spring day three years ago, those two pieces of her life tangled together.

During practice, the Divas heard a loud crash and ran to the street, where they found an injured man who had been riding a motorcycle. The team saw the car that hit the man driving away, so Hamlin, still in her shoulder pads, hopped into her police cruiser and arrested the culprit – an intoxicated woman driving a Mercedes Benz.

Hamlin still had football to play though, so after the woman was taken into custody, she promptly returned to practice.

For the six former Terps and 53 other members of the Divas, the next two months of their lives are dedicated to capturing another title in their new league. While there may be no real rewards aside from a championship ring, the league is far more than just recreation to the players.

Winning the championship last year was one of the biggest life experiences for many of the Divas.

“It ranks about third,” Michael said. “Having my son, buying my own house, and then winning the championship.”

Most of the women began playing just to stay in shape and have weekly exercise. It does not take long before they are consumed by the competitive atmosphere.

“When I started, I didn’t think it would be that serious,” Gwanyalla said. “I thought it was going to be another sport that I’d probably get into, but with the dedication and the focus of the coaches and the other players, it’s hard to start playing and not take it seriously.”

That dedication comes in part from head coach Ezra Cooper, an imposing man built like a lineman who serves as a teacher for the athletes. Cooper played linebacker at Division II Shepherd College in West Virginia, but enjoys the level he coaches at most of all.

“It’s one of the purest forms of football,” Cooper said of coaching the Divas. “You have people that want to be here and genuinely enjoy what they are doing. … It’s the best coaching job in the area.”

Cooper has been with D.C. since the inception of the franchise. His unique style of picking out players has helped the Divas become the success that they are. In football, usually the strong survive, but Cooper looks for a combination of athleticism and understanding of the game.

“We’re not looking for strength; it’s all about technique,” Cooper said. “It doesn’t matter if the person across from you can bench press 300 pounds. If you have better technique, you’ll beat them.”

That philosophy is evident when you take a look at some of the Terps on the team whom outsiders might have trouble believing are football players. That is, until they saw the Divas lace up and hit people on the gridiron. Michael may be the smallest defensive lineman not in pee-wee football as she stands at about five feet tall.

Lately it’s the Divas – and their six Terp alumnae – who must be using the better technique, because nobody seems to be able to beat them. Or maybe they have not been defeated because all of the players on the team have the same attitude as their coach, who is a payroll manager by profession but a Diva at heart.

“This is my life,” Cooper said. “The other part: it’s just to pay the bills.”