State of the art galleries 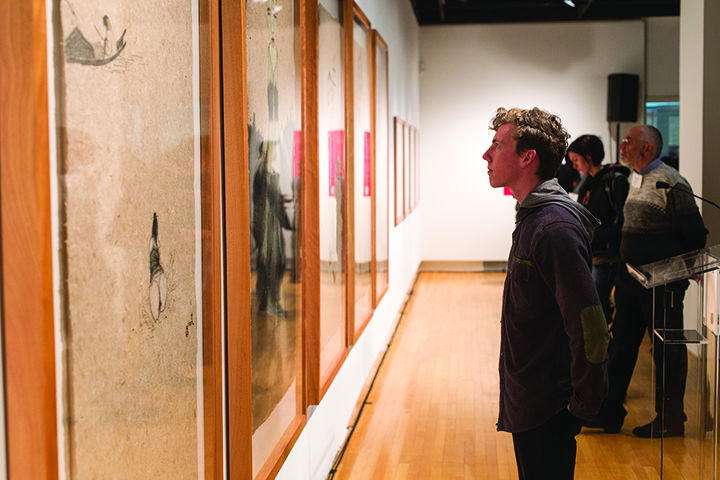 Connor Lee, a sophomore computer science and studio art major, examines an ink painting at the opening of Reshuffling the Past: Contemporary Chinese Ink Art in the Art-Sociology building on Tuesday, Feb. 10.

Connor Lee, a sophomore computer science and studio art major, examines an ink painting at the opening of Reshuffling the Past: Contemporary Chinese Ink Art in the Art-Sociology building on Tuesday, Feb. 10.

“We never thought you were here!”

Within the typically positive feedback, that line is the most common response given by visitors to The Art Gallery, said Taras Matla, the gallery’s art administration manager.

Admittedly, the gallery is not in the most visible of places, Matla said. Many of The Art Gallery’s passersby are rushing to or from a class as they near the gallery, located on the second floor of the Art-Sociology Building.

It’s a similar problem the Driskell Center in Cole Field House’s eastern wing faces. The center’s gallery also does not have its own building, and like The Art Gallery, the center always gets visitors who tell them they didn’t know it was there, said Stephanie Maxwell, the center’s project archivist.

Combating their low visibility, The Art Gallery and the Driskell Center are two of the following five galleries offering various free art exhibits right on this campus — if you know where to look.

A “micro-encyclopedic museum,” The Art Gallery’s permanent collection contains an assortment of about 2,000 objects, Matla said.

The work corresponds to a variety of time periods, he said, with everything from ancient Chinese art and African sculptures to modern and contemporary pieces.

Though the gallery has the largest exhibition space of the five on this campus (3,600 square feet), it can only display a fraction of its permanent collection at a time. In the hall’s inner room, 20 to 30 objects selected from the collection are featured every semester, Matla said.

While requests to the Smithsonian can take a few months, objects in The Art Gallery’s permanent collection typically can be made available within 24 to 48 hours, Matla said. Requests can be made on the gallery’s website.

“That’s a way [we’re] bringing down these preconceived notions of museums as inaccessible mausoleums, where artwork is stored but inaccessible,” Matla said.

The Art Gallery also maintains a more calming ambiance, Matla said, instead of the “prison” quality given off by the looming guards at some museums.

“Rightfully so, with objects of exceptional quality,” he said.

In choosing exhibitions, The Art Gallery’s staff brings in a diverse selection of artwork, Matla said. The current exhibition displays Chinese ink art, but past shows have included photography, wood and paper sculptures, and even memes and music videos.

“Filling collection gaps … is a very important part of our mission,” Matla said.

Named after David Driskell, an artist and former university professor, the Driskell Center’s goal is to bring an African American perspective into the American art cannon, Maxwell said.

The center is where “unheard voices are heard,” she said.

The center’s current exhibition “Emancipating the Past” consists of works by contemporary African American artist Kara Walker and explores themes of race, sexuality and violence.

“Emancipating the Past” has drawn more attention than past exhibits, Maxwell said. The opening event accommodated about 450 guests; daily attendance has been up to about 25 visitors a day, and PBS held a panel discussion about the show, she said.

“A lot of galleries on campus have a very academic approach to art, and we kind of challenge that,” Maxwell said. “I think our exhibitions are less codified.”

One gallery that doesn’t suffer from low visibility is the Stamp Gallery, located right off the main entrance of Stamp Student Union and above the food court.

With its big windowed walls and heavy foot traffic, the gallery is in a great location, said Martine Gaetan, the gallery’s general manager and a senior French and history major. The staff keeps the doors closed to cut off noise and preserve the art’s atmosphere, she said.

The gallery’s exhibitions feature contemporary artists who are currently on the scene or mid-career, said Joe Calizo, Stamp’s Assistant Director of Student Activities.

The gallery aims to challenge and engage visitors, Calizo said. Last semester, the exhibit “Looking Black at Me” dealt with issues of race and privilege in the aftermath of the Michael Brown shooting in Ferguson, Missouri.

Students can curate their own shows in the gallery and assist in selecting works to be purchased by Stamp through the Contemporary Art Purchasing Program, Calizo said.

In the Architecture building, the Kibel Gallery is a single room display of professional artwork and photography relating to architecture and the built environment.

“The Kibel has a mission to spark conversation with the larger public about the built environment,” said Ronit Eisenbach, the gallery’s chairwoman and curator. “The built environment is something we all live in and construct together.”

In exhibitions, the gallery has partnered with other campus departments, such as the women’s studies and Digital Cultures and Creativity programs, as well as with off-campus groups, such as College Park Scholars and the Austrian embassy in Washington.

“Because it’s not for profit, we have the luxury of being about creative work and education,” Eisenbach said. “We can support the creation of new design work and new artwork.”

The Herman Maril Gallery, located in Room 1309 of the Art-Sociology building, is something of a niche gallery. It  primarily services the studio art community, said Justin Strom, a studio art faculty adviser.

The gallery gives many studio art students the opportunity to curate their first shows and features the artwork of the major’s entire graduating class each semester, Strom said.

Additionally, the gallery hosts the Sadat Art for Peace Competition every year in early April, and the Sadat Lecture for Peace speaker gets the winning sculpture as a gift.

When the 2013 winning sculpture — a bronze cast of a ham sandwich — was presented to the Dalai Lama, who was that year’s Sadat lecturer, he regaled those present with a story about his mother, Strom said.

“It was like the Dalai Lama’s a regular person in some ways,” he said with a laugh.