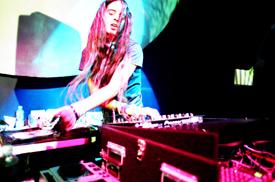 For some, music can be seen as an art form that allows for pure expression, introspection and entertainment. For Bassnectar, also known as Lorin Ashton, music is more than that — it’s a way of life. For over a decade, Bassnectar has rocked the electronic music scene by combining a wide array of genres and beats to produce a sound riveting enough to literally move you.

Ashton has been on a whirlwind tour across the United States and will perform Saturday night at the D.C. Armory. Read on for our email interview with Ashton and his thoughts about his creative process, dubstep and much more:

Diversions: You’ve had a really busy September what with multiple tour dates per week and traveling all over the country. What do you [do] in your spare time?

Lorin Ashton: This is just normal life. For over a decade I have been touring nonstop. Every Spring & Fall we take the whole Bassnectar crew and spill out into the streets to run wild with the freaks in each village.

Diversions: How have you crafted your sound?

Ashton: Very naturally, by exploring the billions of influences that exist in the world, and nurturing their interplay with my own raw ideas and style.

Diversions: How long is [the] production process for each track?

Ashton: Many, many months. But that is because I tour full time, so I rarely do anything but sit and work on music for days on end. If I did, I would finish a lot more. It also doesn’t help that I am always working on well over 100 projects at a time — it is pretty insane.

Diversions: How do you decide which track to start a set with?

Ashton: Usually, I like to start [off] with a massive bang, but even that bang needs a buildup, so you have to conjure the tension in some creative manner. The rest of the set is a series of tension & release as the music breaks down, builds up, takes left turns, and maybe takes the scenic route.

Diversions: Some of your fans may not know that you used to be involved with death metal rock bands. How is the experience of producing different than your rock days? Is it equally as satisfying, or more?

Ashton: I never really had “rock” days. I pretty much spent a few months with Metallica & Nirvana and then dove headfirst into the underground death metal scene. That experience transformed my life in a million different ways.

Diversions: If you could go back to when it all began for you, would you change anything? What advice would you give to your younger self?

Ashton: Enjoy every moment like your last. Treat every challenge like a goal, prioritize your health and peace of mind and work with as many other people as possible.

Diversions: Your music has always been extremely popular in the underground world, but lately some of your tracks have gone mainstream. Do you have any fears about becoming a mainstream product? If so, what would you do when that day came?

Ashton: No, I don’t really worry about it. If someone changes themselves, their core intentions [or] their vision in order to appeal to the mainstream, then that makes them a sell out. But if the mainstream comes to them, it’s a different issue. I have done my own thing, off the radar, alongside my friends, for eons, and if “the mainstream” starts gravitating towards it, I don’t mind as long as I am not compromising my core vision. I am a very inclusive person, and I think there is beauty in everyone.

Diversions: How do you feel about what some are calling the “revival of dubstep” that has hit the charts these past couple of years? Is dubstep’s new popularity a danger to this side of the music industry?

Ashton: I was doing my thing way before dubstep, and I will be doing it way after. While it is in its heyday, I enjoy the f— out of it. It is a great style, and it has so many mutant forms and alternate offshoots. Just like any great genre, there is a vast story behind it that is continuing to unfold so short little quotes can’t do it justice. Sound [bites] aren’t really my thing, but the questions you asked are really interesting…

Diversions: Your concert is coming up this Saturday at the D.C. Armory. What can fans expect from the show?

Ashton: We have had the pleasure of many amazing sets in the area at festivals like Starscape & All Good, and within the walls of many key local venues, my favorite of which was the 9:30 Club. Last year we sold out most … shows months in advance, so this year we wanted to put together a massive “Come One, Come All” type of regional freak-out experience, and bring everyone together under one roof. I am extremely excited for this one!