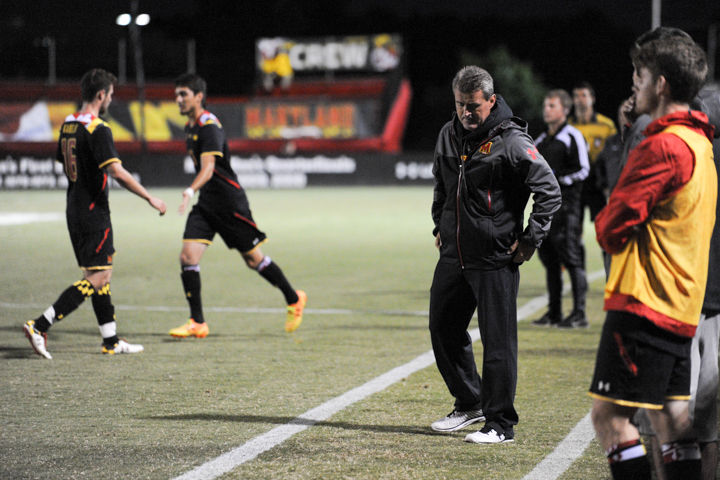 Head coach Sasho Cirovski looks down with frustration as midfielder David Kabelik goes off after receiving a yellow card during the first half of the Terps' match against Dayton on Sept. 22, 2014 at Ludwig Field.

Head coach Sasho Cirovski looks down with frustration as midfielder David Kabelik goes off after receiving a yellow card during the first half of the Terps’ match against Dayton on Sept. 22, 2014 at Ludwig Field.

He tried pushing his way toward the officials, his arms flailing and his voice booming. The final whistle had just blown on the Terrapins men’s soccer team’s 3-2 overtime loss at Northwestern on Sunday, and coach Sasho Cirovski approached the three green-clad referees while another man held him back.

The game concluded in controversial fashion, with Northwestern midfielder Cole Missimo slotting the game-winning goal in the 92nd minute on a play that Cirovski believed should’ve been reversed.

The divisive finish concluded a wild game in which the Terps overcame injuries to key players and an early 2-0 hole to rally late and tie the game in the 85th minute. So when the officials didn’t change the ruling, Cirovski stomped and waved and yelled as his defeated team looked on.

Nonetheless, he wasn’t happy with his team’s effort on the last play either.

“We worked hard to be in the position to get a positive result,” Cirovski said. “And to give it away like that, on the last play, is unacceptable. But it’s over, we have to file it, we have to move on, and we have to get ready for a very good VCU team on Wednesday.”

The play began when Wildcats forward Joey Calistri muscled the ball around Terps defender Chris Odoi-Atsem on the right end line. Calistri appeared to dribble out of bounds, and Odoi-Atsem raised his arm to indicate a turnover.

The referee didn’t blow his whistle. Calistri controlled the ball on the side, drawing goalkeeper Zack Steffen out of goal and pushed the ball to Missimo, who ripped a right-footed one-timer past several Terps defenders into the back of the net to seal the win.

The defeat marks the Terps’ second consecutive loss. With just eight games remaining, the Terps (3-5-2, 1-2-1 Big Ten) are in danger of missing the NCAA tournament for the first time since 2000.

“Every loss is very difficult to swallow,” Cirovski said. “The fact that we’ve already had five, is a little bit unprecedented for a Maryland soccer team. But it’s our record, we own it.”

A victory would’ve certainly helped their chances, but extenuating circumstances hindered the Terps before the game even began. Midfielder Tsubasa Endoh and forward George Campbell — who have started in five and eight games, respectively — didn’t play. Midfielders Mikias Eticha and Alex Shinsky didn’t play, either.

“We hope to have them all back this week,” Cirovski said. “Hopefully by Wednesday, and certainly by Sunday.”

Even further, Steffen injured his right arm during warmups, and it appeared to obstruct him early on. In the third minute, defender Henry Herrill smashed a right-footed shot at Steffen, who deflected the ball. But it kept rolling past him, eventually settling into the back of the net.

But Cirovski’s squad continued to push the pace and attack the net. Cirovski used 17 players as the Terps frequently benefited from fresh legs.

“Certainly the goal raised the energy and confidence of our team,” Cirovski said. “Thought we could have maybe gotten another goal before half time. I was proud of the guys that they stuck with it.”

The Terps’ persistence paid off with less than five minutes remaining when Cirovski turned to an offense-heavy scheme, and left just two defenders on the field.

Midfielder Michael Sauers collected a deflection outside the left side of the box and sent a cross to forward Jeroen Meefout. Meefout stopped the ball with his chest, eluded the defender with a dribble and knocked in a right-footed shot from a couple feet away.

The late goal gave the Terps momentum entering their fourth overtime of the year. They started the frame with possession, but the Wildcats forced a turnover and began pushing downfield. A few moments later, the ball was in the back of the net, and the Terps were left waiting for a call that never came.

“We need to stop taking plays off in games,” Cirovski said. “We have to start playing complete games with the mentality that is expected of a Maryland team. That’s the main thing.”

After the goal, Missimo ripped off his shirt and slid to the turf as the Wildcats tackled him in celebration. The Northwestern band played a fight song. And Cirovski tried to argue a decision that sealed the Terps’ fifth loss of a frustrating season.

“It’s sickening how we gave the game away at the end,” Cirovski said. “That was a gut-wrenching conclusion to the game.”