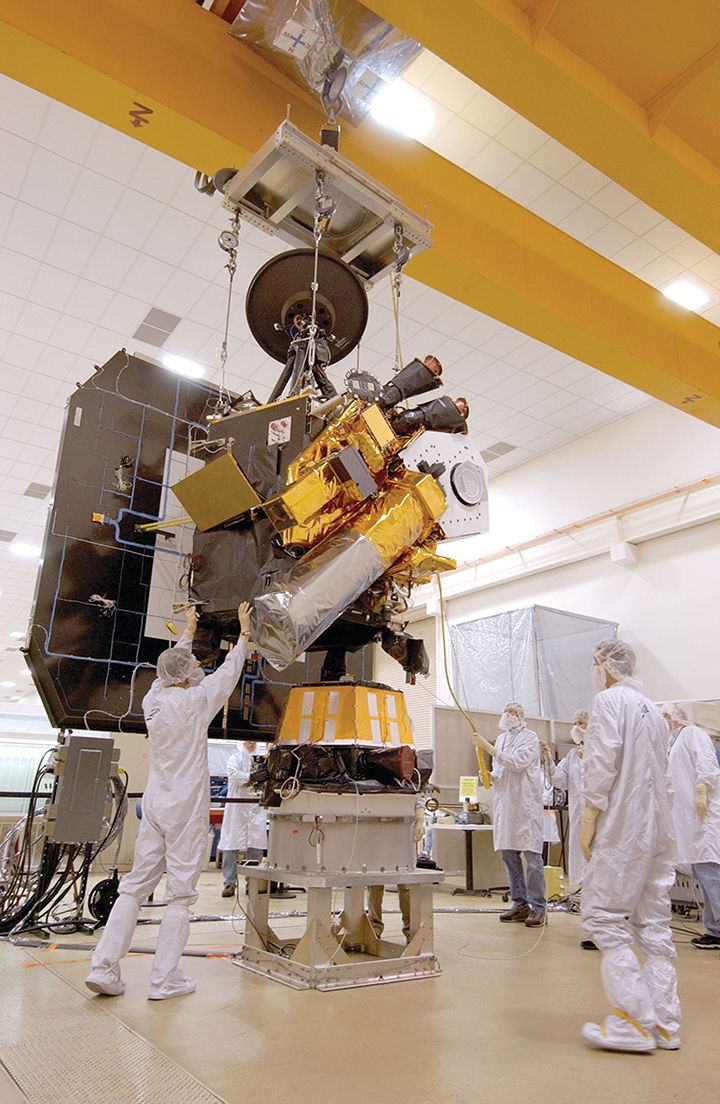 Image of Deep Impact spacecraft in a clean room being assembles at Ball Aerospace and Technoligies Corporation in Colorado.

Image of Deep Impact spacecraft in a clean room being assembles at Ball Aerospace and Technoligies Corporation in Colorado.

Ten years after university researchers helped with the first mission to bring a probe in contact with a comet, the spacecraft’s influence on astronomy is far from over.

This summer marks the 10th anniversary of the Deep Impact probe — the product of a joint mission between NASA, Ball Aerospace & Technologies Corp. and researchers at this university — becoming the first spacecraft to make contact with a comet, which changed the fundamental understanding of these space objects.

Now university scientists are looking past the July 4, 2005, landing and toward new projects and further exploration.

The goal of the Deep Impact mission was to learn more about the composition of comets, but even the scientists involved said they were surprised by what they learned.

Before this mission, consensus held that comets were encased in a thin layer of crust to protect their icy core.

With the results from the probe after it collided with the comet Tempel 1, researchers learned comets were much more porous than they originally imagined. The composition at their surface is comparable to that of freshly fallen snow, which has earned them the nickname “dirty snowballs.”

Studying comets is not only important for astronomy, but even to the understanding of the origins of life on Earth, said Michael A’Hearn, astronomy professor and the principal investigator on the Deep Impact mission.

“Comets are one of the potential sources for all of the water and organics on Earth,” A’Hearn said. “Because they are small and spend most of their lives away from the sun, it preserves the molecules at the time of planet formation.”

After its initial impact with Tempel 1, the Deep Impact mission was extended to complete a number of observational studies on other comets. However, after more than eight years in space, Deep Impact lost contact with Earth due to a computer malfunction on the spacecraft.

“That was a shock to all of us,” said Lori Feaga, an astronomy research scientist and member of the Deep Impact team. “The team of scientists working on the Deep Impact mission were really like a family at that point. … Losing Deep Impact was like losing a family member.”

Still, the team has not given up on its goal to study comets. Many of the original members of the Deep Impact mission have submitted for NASA funding for a new project called CHagall, Feaga said.

This mission proposes to send a spacecraft similar to Deep Impact to another comet, Hartley 2. The probe will orbit the comet and deposit probes in 10 places on its surface to take samples, investigating what is directly underneath the outer layer, Feaga said.

The researchers aim to use this mission to determine the best place on a comet to send a probe in the future to collect an ice sample from the nucleus of the comet to bring back to Earth, which has never been attempted before, A’Hearn said.

Many of the original scientists at this university who worked on the Deep Impact mission are still here 10 years later. A’Hearn is now also involved in the Rosetta mission, which resulted in the first soft-landing on a comet this past November.

The university’s connections to some of the most significant missions to comets are no coincidence, researchers said.

“The team at the University of Maryland is potentially the nation’s best comet group as far as number of people and variety of studies,” said Tony Farnham, a senior astronomy research scientist and one of the members of the original Deep Impact science team, said.

Even 10 years later, the scientists’ passion for the science behind this mission has not waned.

“Comets are dynamic; they’re always changing,” Farnham said. “They are these wild beasts that do interesting things, which makes them a challenge to study. I really enjoy that challenge.”