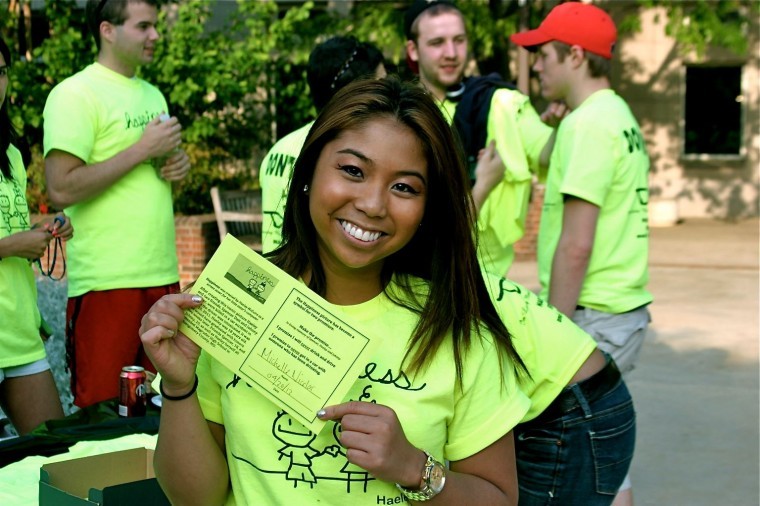 Michelle Nicolas signed a pledge to not drink and drive or get in a car with an intoxicated driver. The promise is part of the Happiness Foundation, a movement inspired by the May 2011 deaths of university student John Hoover and Magruder High School students Spencer Datt and Haeley McGuire.

Michelle Nicolas signed a pledge to not drink and drive or get in a car with an intoxicated driver. The promise is part of the Happiness Foundation, a movement inspired by the May 2011 deaths of university student John Hoover and Magruder High School students Spencer Datt and Haeley McGuire.

Sporting neon shirts and wide smiles, university students have jumped onboard a campaign for happiness in the hopes of brightening and empowering the community after the loss of three of their own.

Students and Terps athletes have worked to establish a campus presence for The Happiness Foundation, which was formed in the aftermath of a drunk driving accident in Montgomery County that claimed the lives of university student John Hoover and Magruder High School students Spencer Datt and Haeley McGuire, last May. Sophomore economics major Kushal Choxi and two other friends helped launch Team Happiness, wanting to honor their classmates’ deaths by encouraging others to value their lives.

“The community and myself were devastated after the accident. Before this tragedy, I took life for granted,” he said. “Setting up The Happiness Foundation and reaching out to other peers really helped me and some of my friends to cope with the tragedy.”

The idea for Team Happiness began with a doodle, a drawing McGuire created years before and had saved as her sister’s computer screensaver. After her death, McGuire’s father designed a T-shirt with the logo to hand out to funeral attendees. The “Happiness” shirts and their simple design became a popular sight in the community, worn by dozens of students, parents and teachers.

Kushal, McGuire’s parents and other founding members began distributing them at Magruder’s sporting events in exchange for two promises from students: First, they will never drink and drive, and second, they will never get in a car with someone who is intoxicated.

“We didn’t want our child’s death to be in vain,” said Haeley’s mother, Elisa McGuire. “It’s such a preventable tragedy.”

More than a year and 15,000 T-shirts with the words “Don’t Drink and Drive” later, the foundation is continuing its fight against drunk driving beyond the Magruder community. Friends of the victims at several universities have requested shirts for their teams and organizations, and new Happiness clothing is being sold to benefit the foundation.

The movement is still growing and has shifted to an even stronger focus on helping communities stand against drunk driving, an issue that plays a dangerous role in students’ social lives on many college campuses. Last year, University Police arrested about 596 people for driving under the influence of alcohol, and about 220 people this year since June, according to the department. And in the first week of school, alcohol transports reached a three-year high of 28.

Several university sports teams and colleges have requested shirts, including sophomore Terps gymnast Katy Dodds, a Magruder High School graduate who shared her friends’ story with her team and gave them all shirts in return for their pledges.

“Together I think Team Happiness and UMD can make the world a better place,” Kushal said.

Junior family science major Alison Iovino said losing her friends, McGuire, Datt and Hoover, hit close to home and pushed her to get the word out about the dangers of drunk driving. To get the university’s cheerleading team involved, she and other team members sported their Happiness T-shirts at the Terps football home game before more than 30,000 people last Saturday.

“I know that many kids think that they’re invincible and won’t think twice about drinking and driving,” Iovino said. “When it happens to you or someone you know, it really opens your eyes to the issue and makes you want to do something about it.”

Team Happiness hopes to establish a club at the university to promote their cause, Choxi said, and the founders hope through their efforts, they can prevent the devastation of drunk driving.

“I get a good feeling when I see random people wearing the shirts or hear stories about individuals who were going to drive home intoxicated, but then saw a Happiness shirt or sticker on a car and decided to get another ride home,” Choxi said. “It makes all the time invested worth it.”