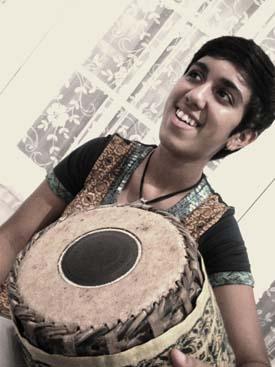 Rajna and Anjna Swaminathan are not prodigies. They were not born with instruments in their hands, as their mother used to say. Their success did not come without effort, by any means. But when you look at them, you can tell.

The sisters wear no labels marking them as students of the most highly regarded South Indian gurus in their respective crafts. Few know that they both performed solo concerts in India. They do not brag that they spent last week in Georgia as part of a 25-city tour in collaboration with the Ragamala Dance Company. Yet from their mahogany eyes, talent shines, along with knowledge of the responsibility that comes with great skill.

Of the two, Rajna, a junior anthropology and French major, is the drum: Sometimes reserved and quiet but intently tapping out a rhythm in the background to provide pace for herself and those around her.

Having immersed herself in the art of the mridangam – a drum with two heads that looks like a conga drum turned on its side when played – since the age of 5, she is now, at 21, one of the youngest and one of the only female players in the world.

Anjna, in contrast, has the flair of a violin, animated and graceful, with the playful spirit that seems to be consistently set aside for the youngest child within a family. A sophomore theater major, she sees herself as less focused on music as a career and more on how it can be combined with other creative disciplines.

As children, Rajna and Anjna started in the same place. Now that they are young adults, their paths are running parallel, brought together through tragedy and their mutual search for who they really are.

After they married in 1979, P.K. and Lalitha Swaminathan filled their house with art and music.  Their children, Rajna and Anjna, would dance to old Indian music while their parents videotaped their performances.

“It was very much like this little bubble that we lived in,” Anjna said.

One day, Rajna was sitting in her father’s lap and started playing with the mridangam. Although the mridangam was traditionally seen as a forceful male instrument, the parents decided to see if their older daughter could learn the art of percussion.

In typical sibling fashion, Anjna wanted to play an instrument once Rajna started. She preferred a melodic instrument and settled on the violin.

The Swaminathans thought it was necessary to expose their children to both American and South Indian classical, or Carnatic, music. Anjna began first, with western violin lessons.

P.K. Swaminathan’s idol was Umayalpuram K. Sivaraman, a well-respected mridangam player. He decided to call this man and ask him to come to America to pass some of his skills on to him. The guru, however, refused to teach students except in his own house – it was the only way these things were done.

After a few lessons in India, though, Sivaraman’s parents convinced him to go to America and teach P.K. Swaminathan, the most passionate apprentice they had ever seen. In 1999, the legend came to the Swaminathan house for the first time.

Lalitha went even further, trying to persuade Sivaraman to teach 8-year-old Rajna as well. One night, the parents took Anjna along to a rehearsal, leaving Rajna in the care of the guru. When the three returned home, Sivaraman was standing at the door of the garage.

“Lalitha, I’ve accepted your daughter as my student,” he said in an enthusiastic Indian accent. “She’s playing everything I tell her to play.”

Rajna simply remembers him challenging her to play different things and deciding she was good enough to merit his teaching.

“I guess I’m really lucky I decided to practice that day,” she said.

She had never experienced such intense training and was frequently close to tears after as much as three hours of class and four hours of independent practice.

“Outside of class, he was like a grandfather figure, but when it came to music, I got no special treatment for being a little girl,” she said.

Motivated by the greatness of her teacher, she persevered.

Now that Lalitha Swaminathan had set one daughter on a track to fame, she turned to the other.  So she called H.K. Narasimhamurthy, a student of her idol. He said he was too busy but might have more time once he retired at 60.

Lalitha found others to train Anjna but never forgot May 4, 2004 – his 60th birthday. When that day arrived, she called him again.

“You told me,” she said. “I’ve applied for your visa, and we’re sponsoring you to come here.”

In the fall, he became the second legend to come to the Swaminathan house.

Meanwhile, Rajna’s training had progressed enough for her to go to India for lessons. In 2002 and 2003, she traveled to Chennai, the center of the Carnatic music scene. Two years later, Rajna was ready for her debut concert, an Indian tradition in which one is presented to the community as a legitimate musician.

“In India, everyone in the audience is a critic,” Rajna said. “They know every detail of what you’re playing and how you compare to your teacher and your peers. It’s quite intimidating, actually.”

The following year, Rajna began to participate in Chennai’s festival season, which spans the whole month of December. Indian musicians flock to Chennai – India’s version of Broadway – to put on impromptu concerts together. As many as 500 to 1,000 concerts occur simultaneously, with many performers meeting on stage for the first time, sometimes in the corner of a small temple, sometimes in a massive concert hall.

“It feels like the whole city is pulsating to the same rhythm,” Rajna said.

Rajna continued to travel to Chennai each year for the festival season. In 2009, Anjna joined her in India when her guru presented her to his teacher, M.F. Gopalakrishnan, Lalitha Swaminathan’s original idol. The teacher wasn’t impressed.

She stayed with Gopalakrishnan for 40 days, spending nearly six hours a day working. He never told her she was doing a good job. The only positive recognition she received was an occasional nod of the head and a raise of the finger.

But after 40 more days of intensive training the following year, the time for Anjna’s debut concert had arrived.

It was July 2010. Anjna was preparing to go to college, with her debut symbolizing both graduating and learning at a whole new level. It was an end and a beginning.

Fifteen days later, Lalitha Swaminathan, Rajna and Anjna’s mother, died suddenly of cardiac arrest. Her blood pressure had been slightly too high, but there were no telltale signs.

“It was so sudden that I knew it was fate,” Anjna said. “We realized that our mother gave us this gift and how it is that immediately after she presents us to the world, at the top of how happy she was, that’s it.”

“She’d always been the voice of reason that spoke up in any internal debate, so I always keep her in mind when I think about where I’m going with my music,” Rajna said. “Without her I wouldn’t be where I am today, and this inspires me to persevere even when I’m completely lost.”

Vijay Palaparty first worked with Rajna and Anjna at a memorial service for their mother. At one point, they were rehearsing a poem that involved the color red. Out of nowhere, red balloons began floating toward the top of the theater. It was a perfect juxtaposition but strange at the same time, and they began to laugh.

“It was ridiculous, it was silly, it was random,” said Palaparty, the co-founder and co-artistic director of the Spilling Ink Project, a company that explores new ways of telling classical South Indian stories through dance. “That sort of freshness was there.”

The sisters believed in life after death. Rajna became even more focused on music, and Anjna picked up theater with a new dream of becoming a star, not on the streets of Chennai, but on Broadway.

Gradually, both concentrated on performance studies within their own realm of study. Rajna started to experiment with cross-cultural performances, specifically jazz. Anjna’s interest in interdisciplinary work grew, and soon she and Rajna were partnering with dance companies, including Ragamala. Last year, Rajna, Anjna and Ragamala performed at the Kennedy Center as a part of the maximum INDIA festival and are currently in the middle of their national tour.

“It was very important to us to be artists practicing the classical Indian art with integrity here in the United States,” she said. “The fact that we come from very strong lineages with teachers who are known as the best in our respective forms means we feel a great responsibility to present our artistry at the highest quality, and they share that with us.”

The sisters are a dichotomy – a “unit,” as Ramaswamy said – but also seen as “internal and external space,” as Palaparty described them.

“There’s a very strong sort of meditative depth to Rajna,” Palaparty said. “She is the observer while Anjna is sort of the voice and very expressive.”

Rajna and Anjna both feel they are trying to find new ways to express their identities through music. As co-artistic directors of Rhythm Fantasies, Inc., a non-profit corporation the family created, they have shied away from simply bringing classical Indian musicians to America. Instead, the sisters are mixing contemporary with traditional, as their parents once did to give them the skills they needed.

“It’s the fact that we’re Indian, but we’re also American,” Anjna said. “We’re a perfect balance of the two and sometimes this constant war between the two, but there’s something so beautiful about being in those two places and being between those two places.”