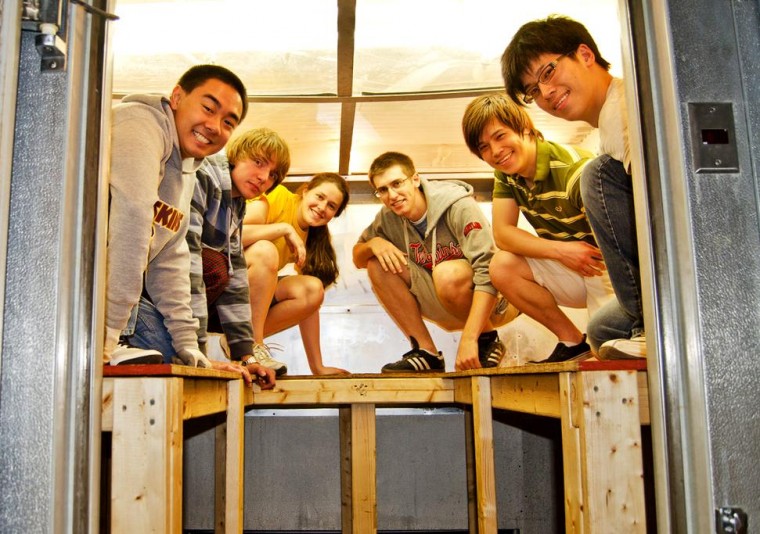 Team MEGA — 14 university students in the Gemstone program — received a $12,000 grant from the University Sustainability Council. Part of that money will go to making and caring for a fish tank located on the South Campus Diner’s rooftop garden.

Team MEGA — 14 university students in the Gemstone program — received a $12,000 grant from the University Sustainability Council. Part of that money will go to making and caring for a fish tank located on the South Campus Diner’s rooftop garden.

For a group of university students, tilapia is more than a simple dinner – this fish is potentially a cheap, green solution to fighting global hunger.

The 14 students, members of the university’s Gemstone program, will test different natural materials to determine what the most cost effective and efficient resources are in the agricultural system of aquaponics – a combination of fish farming and growing plants without soil. The group of students, also known as Team MEGA, received a $12,000 grant from the University Sustainability Council, which awarded funds to a dozen eco-friendly projects on the campus this year.

Sophomore cell biology and genetics major Kalyani Kumar, a member of the team, said many people suffering from hunger or malnourishment could benefit from using aquaponics – but only if they can use available resources.

“There are aquaponic systems that are meant for urban environments, but these are really high-cost and just require a lot of energy to maintain,” Kumar said. “There isn’t a lot of research as to how aquaponic systems can be implemented in rural third world countries.”

Aquaponics produces vegetables and herbs in water through a circular system in which the fish’s waste fertilizes plants, which in turn cleans the water and creates a healthy environment for the fish.

However, many people living in energy-poor, remote regions cannot use the system because they do not have access to commercial fish food.

With hunger and malnourishment climbing – the Food and Agriculture Organization of the United Nations estimates it impacts more than 1 billion people worldwide – Team MEGA hopes the resources impoverished communities do have, such as poultry litter, compost and even human waste, could be the answer.

“The project was born out of noticing how the conventional aquaculture is either inefficient, wasteful or just overall not very environmentally friendly,” said sophomore mechanical engineering major Kevin Li.

In addition to Li, three other students, Eric Kazyak, Jessica Lu and Mike Reilly, developed the plan for the aquaponic system project.

In a three-phase experiment, Team MEGA will test five different natural materials as fertilizer and five different possible fish foods, such as soy meal. Then, members will measure the yield – meaning how much vegetables and fish each tank produces.

For the next two summers, the team’s 14 members will trade off caring for the fish. The tanks will be housed on the South Campus Diner’s rooftop garden under a greenhouse structure that will protect the fish and plants from weather conditions.

“We also plan to get the community involved as much as possible,” Kumar said. “Our main goal is obviously research, but we also hope to spread awareness within the campus by doing tours.”

Li said the team figured out how to care for the fish by exploring other tanks around the campus – including the eye-less, thumb-sized Mexican blind cavefish in the Jeffrey Lab and bass in the animal science building.

“Ultimately it’s intended to be a very closed system, so it shouldn’t require a terrible amount of maintenance,” said Li.

Team MEGA will publish its findings as part of the Gemstone’s program, and Li said he hopes companies will use the results to produce more environmentally friendly, economical aquaponics systems in the future.

“We definitely hope to spread awareness about aquaponics and its potential to really make a difference in how food is produced globally,” Kumar said.