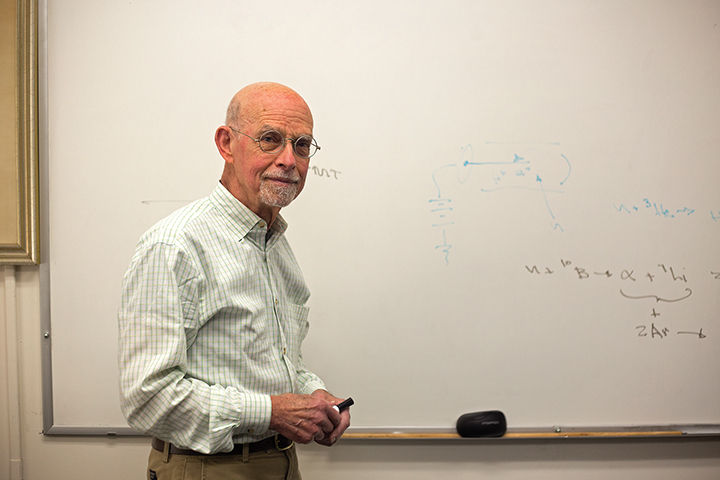 Research that began as an inquiry into an obscure molecular physics question resulted in a new method to detect neutrons, which could provide efficient means of identifying nuclear material.

Michael Coplan, a professor for this university’s Institute for Physical Science and Technology, was studying what happens to electrons as atoms fly apart when he discovered the method for the experiment could apply to a different approach for detecting neutrons.

“The chances of our seeing anything were kind of small, but we thought we’d try,” Coplan said. “And to our great surprise — and this happens almost never — the signal was hundreds of times larger than we’d anticipated.”

Along with several other researchers at this university and elsewhere, Coplan co-authored a study published earlier this month in Applied Physics Letters that detailed a way to measure neutrons using light, gas and a foam structure.

Neutrons, one of the three primary subatomic particles, are notably difficult to measure. Unlike protons and electrons, they have no charge, meaning scientists can’t detect them using traditional means, said Charles Clark, Joint Quantum Institute co-director and another co-author of the study.

While this lack of charge makes the particles hard to measure directly, it also makes them difficult to conceal within any material. Lead walls and other containers can block out detection by gamma rays or electrons — both of which become dissipated by the electric field of the heavy material, Coplan said.

However, neutrons can’t be concealed, he said. The chargeless particles can even pass through lead, which makes them useful for detecting things like nuclear materials.

“Gamma rays and electrons can be shielded with different materials,” Coplan said. “Neutrons, not so much. So being able to detect neutrons that are a result of radioactive decay is a good way of determining whether there is elicit material.”

Another property of neutrons is that they break down very quickly. While protons hold together several times longer than the universe’s history, neutrons fall apart after about 15 minutes. Clark said this quality can also prove useful for detection.

“The thing is, if you see a neutron, that means it was produced by a nuclear reaction that occurred not too far away and not too long ago,” Clark said. “So you want to know about that.”

When Boron reacts with a beam of neutrons in a small container, they set off a chemical reaction that results in the production of a lot of energy and photons, or particles of light, Coplan said. By looking at the photons produced, researchers are able to determine the quantity of neutrons.

The researchers used facilities at the National Institute of Standards and Technology for the study, as well as this university’s nuclear reactor.

Timothy Koeth, the Nuclear Reactor and Radiation Facilities director and a professor of materials engineering, provided the research with neutron beams.

“A source of neutrons is not something you can usually come by,” said Koeth, also a co-author. “We provide that here with the reactor.”

Though other detectors like Geiger counters can be used for similar materials, and while other methods of detecting neutrons exist, Clark said this technique is different because it uses an optical-signal light rather than a voltage pulse, so it detects materials much faster.

Coplan said this detector, which they received a patent for, is also useful because it doesn’t use Helium-3, as many other detectors do. He-3 is becoming rarer, and this detector can use any of the noble gases, including ones that are more abundant.

The detector is also robust and easily adaptable, Coplan said. It can be adapted for different shapes and sizes and does not require expensive manufacturing materials.

“All you have to do is fill up a volume with the gas and find a suitable neutron absorber array and look for the photons,” he said.