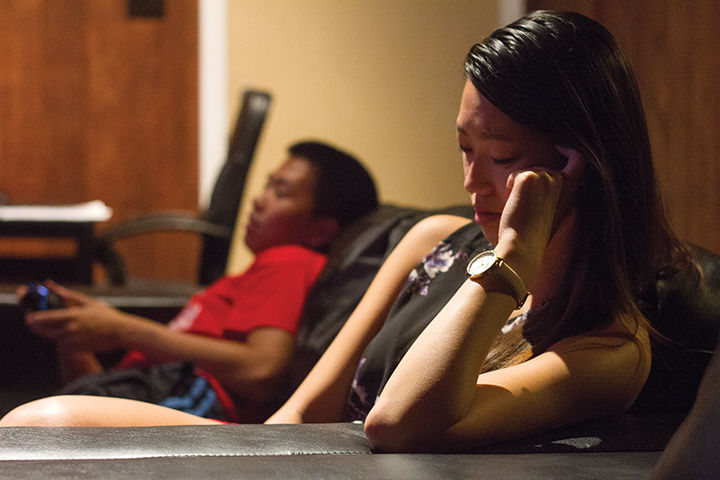 A couple sits in a house in College Park. A recent study found that linguistic cues are linked to cheating and betrayal when couples competed in a strategy game, results that could be applied more broadly to human behavior in future research.

A couple sits in a house in College Park. A recent study found that linguistic cues are linked to cheating and betrayal when couples competed in a strategy game, results that could be applied more broadly to human behavior in future research.

It might be possible to tell if someone is going to betray you based on the way they talk, University of Maryland researchers found.

A study presented in July to the Association for Computational Linguistics, with authors from this university as well as Cornell University and the University of Colorado, found that certain linguistic cues, including increased positive language, are linked with cheating and betrayal.

“In the field of computational linguistics, the thing that people are increasingly interested in is trying to figure out what people are thinking based on observable attributes,” said study author Jordan Boyd‐Graber, a University of Colorado computer science professor and former professor in the Computational Linguistics and Information Processing lab at this university.

Boyd-Graber said it would be helpful to know, whether reading an online restaurant review or trying to figure out if a partner is cheating, what clues may signal that a person is being deceitful. However, this kind of research is complicated because of the logistics of accessing all communication between two people, he said.

To get around that issue, researchers did a case study involving an online war-strategy game called Diplomacy. Players must create alliances and, inevitably, betray one another to win the game. Researchers had access to all in‐game communication, Boyd‐Graber said, and because no outside communication was allowed, they were better able to interpret the data.

“There are a few key signs of betrayal that affect the way people talk to each other,” said Srijan Kumar, a computer science doctoral student at this university who worked on the study. “One of the key things we found out is that players who are excessively polite are more likely to be betrayed … and the betrayers became more positive before the betrayal.”

Certain patterns of words, not specific words, could indicate there may be a betrayal in the near future, Boyd‐Graber said. He said other signs included a lack of planning or speaking in the future tense on the part of the betrayer.

Boyd‐Graber said while it might be difficult to apply this research directly to daily relationship scenarios — in which communication patterns are more complicated and less observable — it could help in other situations, such as negotiations or trade deals. Computer analysis could be used, for example, to detect language patterns to try to figure out if negotiations are going to succeed or fail or to monitor exchanges to determine if anyone is exhibiting the characteristics of possible betrayal.

“Overall, [the research] is a nice example of how a game can reveal something about the human condition,” he said. “And even though you’re not taking a game as seriously, the same sorts of patterns that people observe in high‐stakes negotiations can reveal themselves here. It’s a testament to how relevant games can be in looking at human interaction.”

Kumar said this research could also contribute to future studies of how relationships evolve over time.

For instance, Boyd‐Graber said, regarding friendships or relationships, the way one partner talks might change over time if they know the relationship will end.

Philip Resnik, a computational linguistics professor at this university who was not involved in this study, said this research is valuable because it speaks to the bigger picture of language, providing “useful indications of what’s going on in somebody’s head.”

“It’s an interesting look at human interaction in that there are relationships, and relationships involve trust, and what sort of signals are there to indicate what’s going on underneath the hood?” Resnik said.

He said by using the game in the case study, researchers were able to observe regular unstructured linguistic interactions in a controlled way. Research like this could be used as a stepping stone for the larger, “messier” study of general human interaction, he said.