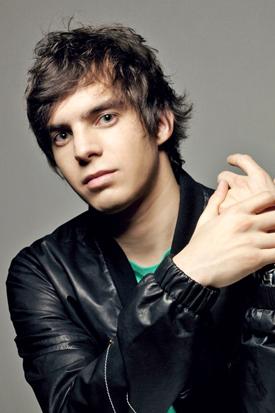 DJ/Producer Arno Cost, only 25-years-old, began producing mixes out of his bedroom at age 18 and releasing them to local stations. Inspired by a wide array of musical styles, ranging from pop to disco, Cost tinkered with various sounds before he created his breakout hit “Magenta” in 2006.

The native Frenchman will be performing at Josephine in Washington on Friday.

“All of a sudden, my song was doing really well,” Cost said. “It was played the most at The Amsterdam Dance Event that year and I just couldn’t believe it.”

Much to Cost’s surprise, revered DJs such as Eric Prydz and Steve Angello also began playing his tracks in their sets. With two more hit singles following in quick succession, the show bookings began rolling in and Cost’s future looked bright.

He knew that creating buzz-worthy tracks was not an easy feat, but maintaining the momentum has proved to be more difficult than he initially expected.

“I had three tracks that worked right away and, after ‘Cyan’ was released in 2009, I was kind of lost,” Cost said. “I wanted to make something better because there were all these expectations of me, so in the end I didn’t release anything.”

After more than a year out of the loop, Cost re-entered the scene and made an impact with 2011’s “Lise.” The song quickly gained the attention of DJs Guetta, Axwell and Sebastian Ingrosso, among others, and gave Cost the opportunity to tour with some of the best in the business.

Though he has found success as a touring act, Cost has not entirely escaped his fear of disappointing his fans, a fear so crippling it caused him to stay away from production in 2010.

“I love what I do but I still have that problem sometimes,” Cost said. “There is always pressure to make quality music, and balancing time between producing, touring and having a life makes it even harder.”

In addition to the pressures of being a sought-after DJ, Cost has been dealing with the drawbacks of mainstream attention.

In just five years, the house DJ scene has become an entirely different place. What began as an underground movement has now taken control of the airwaves, with big artists such as Rihanna and Usher turning to European DJs to help create pop hits.

For DJs who are willing to produce commercial music, the popularity of electronic music has been seen as a blessing. Yet for Cost, whose DJ style resides somewhere in between underground and mainstream, having to deal with this new side of the industry has been a trying effort.

“Now all these young kids who only really know Swedish House Mafia are requesting to play the latest hits, which can be really boring,” Cost said. “You have to look harder for a crowd that is there to hear the DJ and discover new tracks they have never heard before.”

As if to add insult to injury, the latest electronic fad — dubstep — has begun to monopolize the scene. This infiltration has caused a serious riff in electronic music, and dubstep’s signature thick bass line is not something progressive house DJs are generally willing to incorporate into their sets.

“I hate dubstep,” Cost said. “But even though it is popular, I think the electro house music is better and I love the stuff we are doing with it.”

Cost has certainly recognized the need to adapt his music to the sounds of today, but trying to do so without selling out can be difficult. His new remix of Guetta’s “Titanium” is a bold move that he hopes will be a step in the right direction.

“Being a DJ has its ups and downs,” Cost said. “But it is the life I have chosen to live and if you love it like I do, it’s all worth it.”

Arno Cost will perform at Josephine in Washington on Friday. Doors open at 10 p.m. Tickets cost $20.