Anti-social networks make it acceptable for people to disconnect 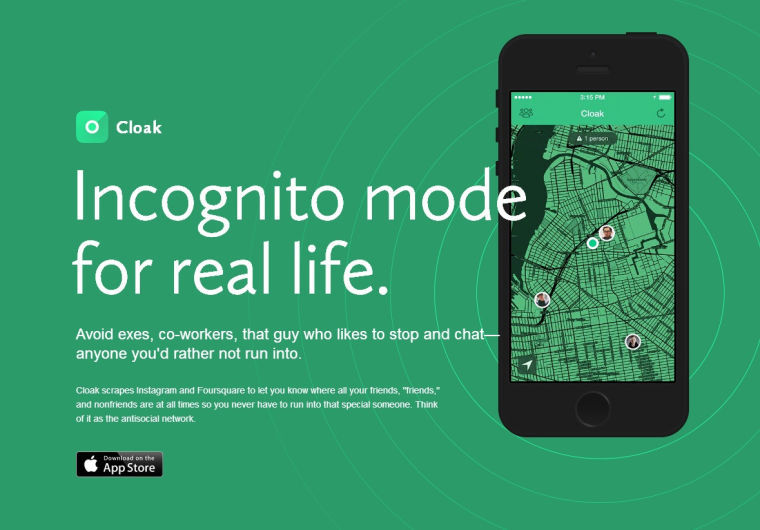 "Last month, programmer Brian Moore and the former Buzzfeed creative Director Chris Baker released an app called Cloak that allows users to avoid running into people they know by notifying them when others check in with their GPS location on social media." —Brianna Patterson

“Last month, programmer Brian Moore and the former Buzzfeed creative Director Chris Baker released an app called Cloak that allows users to avoid running into people they know by notifying them when others check in with their GPS location on social media.” —Brianna Patterson

Multiple news outlets reported earlier this year that the number of Facebook users has decreased among teens and young adults.

This statistic came as no surprise for many members of Generation Y, who are losing interest with Facebook because of emerging platforms and the increasing number of older adults on the network — Mom and Dad are now logged in.

This mass migration away from one of the most popular networks could also be attributed to a declining desire to be in a social sphere. It’s easy to become overwhelmed by news feeds cluttered with statuses from acquaintances, advertisements and junk posts. The pressure to constantly update and be plugged into social media has people looking to detach from these platforms entirely. The proliferation of social networks has led to a new phenomenon that praises the exact opposite: anti-social networks.

Anti-social media aims to decrease one’s presence on social outlets. It has seen the creation of apps that hide your location, cut out distractions or reduce communication to a selected and exclusive few. It is a new option that is repurposing technology for a simpler level of interaction.

Last month, programmer Brian Moore and the former Buzzfeed creative Director Chris Baker released an app called Cloak that allows users to avoid running into people they know by notifying them when others check in with their GPS location on social media.

“Things like Twitter and Facebook are packed elevators where we’re all crammed in together … I think anti-social stuff is on the rise. You’ll be seeing more and more of these types of projects,” Baker said in a Washington Post article. Baker is also the creator of Rather, an application that filters out unwanted posts in news feeds. The idea stemmed from his browser extension, unbaby.me, which was developed to hide incessant baby pictures on his feed.

Other apps aim to make social circles smaller and more exclusive. While Twitter allows you to communicate with thousands of users at a time, apps such as Couple and Avocado create two-person networks. The apps provide a user and his or her significant other (or anyone else) an area to share pictures, videos and updates privately.

And with growing paranoia of Big Brother-like entities controlling the Internet and the fear of personal information or potentially reputation-damaging photos becoming permanent fixtures in Google’s database, there is a growing market for apps that facilitate anonymity.

Snapchat has become popular for letting users capture moments of their life to  share with one or a few people, allowing them to send pictures and videos that last 10 seconds or fewer before self-destructing.

Even Tumblr, a popular microblogging platform, allows for more anonymity by providing a space in which people feel comfortable creating or reblogging content without having to share personal information.

Anomo is a new social network built on anonymity. Users create cartoon-like avatars with protected profiles that can eventually be revealed to other users. If you find you have something in common, you can reveal your photo and information to another person. According to Anomo, this connects users based on interests rather than superficial photos or facades often created to gain more followers or look cool online.

With social media reaching a peak in usage, innovation in anti-social media utilizes technology we already have to help improve communication — not just expand it. In doing so, it creates a world in which it’s OK to unplug every once in a while.