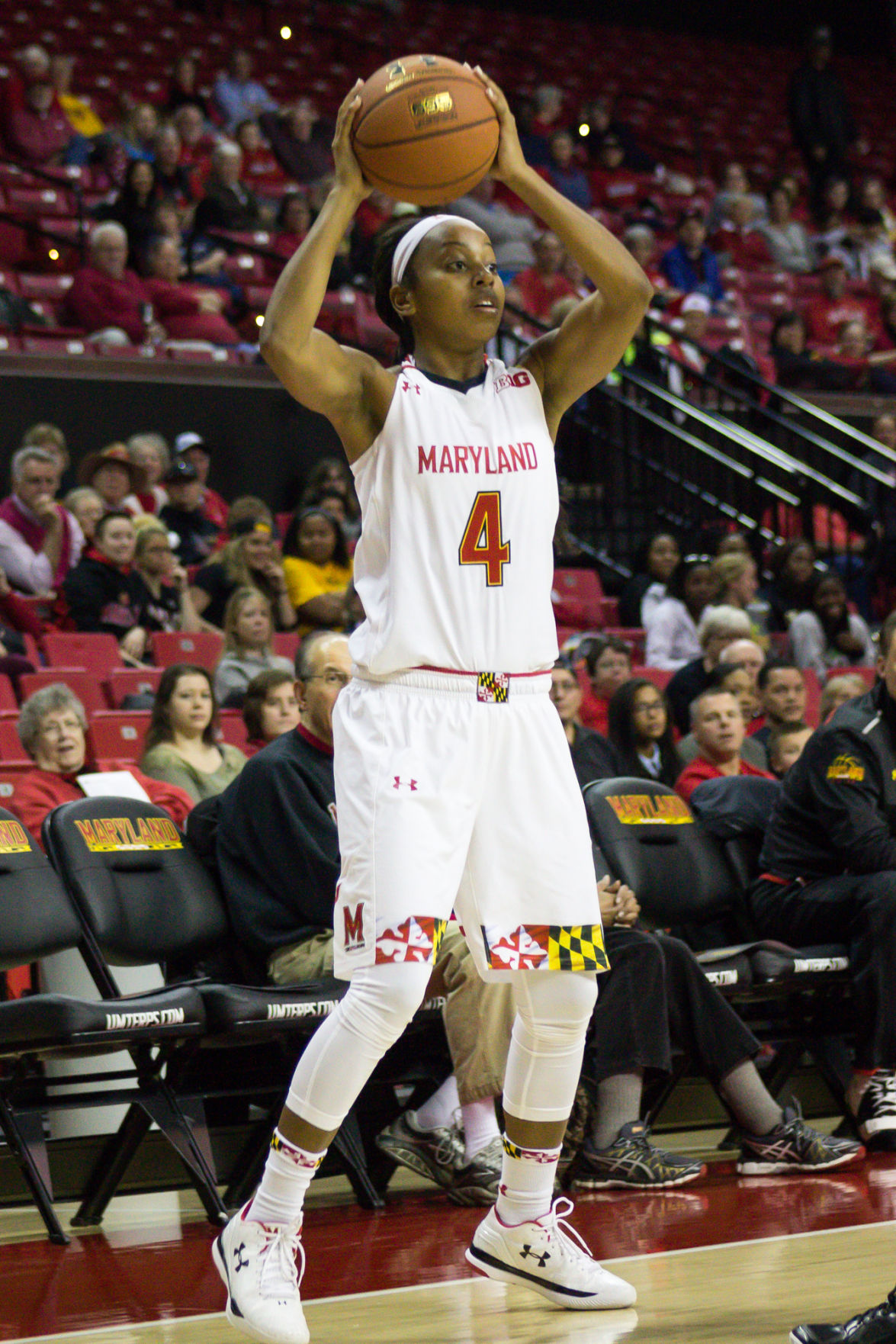 Guard Lexie Brown searches for a teammate to pass to during Maryland's win over Towson on Dec. 7, 2014

Guard Lexie Brown searches for a teammate to pass to during Maryland’s win over Towson on Dec. 7, 2014

Lexie Brown has earned the nickname “Big Shot Brown” among her Terrapins women’s basketball teammates and coaches. Sunday, though, it was center Brionna Jones who ended Indiana’s comeback aspirations in the final minutes off Brown’s missed shots.

After Brown missed a pair of free throws with 4:09 left in the game, Jones grabbed the offensive rebound and laid it in to end a 16-5 Hoosiers run that had cut the Terps’ lead to 11. Then, when Indiana responded at the other end, Jones caught Brown’s air ball and finished it to beat the shot clock.

“She was big towards the end of the game with her boards and her putbacks,” Brown said. “To have a post presence like that down low is amazing.”

Jones finished with 10 points and 14 rebounds, her sixth double-double of the season, to help the No. 7 Terps earn a 84-74 win in Bloomington, Indiana. The victory extends the Terps’ winning streak to 11 games.

“Lexie does a tremendous job as our floor general,” coach Brenda Frese said. “Knowing what we need, when to score, when to get the ball inside to our post players.”

Guard Shatori Walker-Kimbrough continued her success in conference play with 18 points to go along with four steals, while guards Kristen Confroy and Brene Moseley provided lifts off the bench. Confroy finished with five points and four assists while Moseley added eight points.

Indiana (12-7, 2-6) found success early working the ball inside, but midway through the first half, the Terps shut off the paint. The Hoosiers couldn’t find openings in the Terps’ zone and started settling for 3-point attempts.

After Indiana guard Tyra Buss’ steal and score with 9:56 remaining in the first half, six of the Hoosiers’ next seven shots came from beyond the arc. None found the net.

The Terps’ stifling defense continued, and they held Indiana without a field goal for more than eight minutes, a stretch during which the Hoosiers missed 15 consecutive field-goal attempts. When the Terps would pull down a rebound — in which they held a 40-27 edge — they started pushing the ball in transition.

“We really started getting up and down,” Frese said. “We were really able to get out and make some easy plays.”

The Terps went on a 19-3 run during Indiana’s cold spell to take a 42-23 lead late in the first half, during which they shot 63.3 percent while holding the Hoosiers to 25.8 percent.

“We made great reads and decisions against their changing defenses,” Frese said.

The late push in the first half proved vital when the Terps offense cooled off in the second half and Indiana started stringing together consecutive successful possessions. What was once a 24-point Terps lead diminished to 11 points twice before Jones’ buckets.

Still, the Terps were able to hang on for their sixth double-digit win in their past seven games despite a sloppy second half.

“Definitely not the best that we have played,” Brown said. “In the locker room, we weren’t very pleased with our play, but at least we came out with a win.”