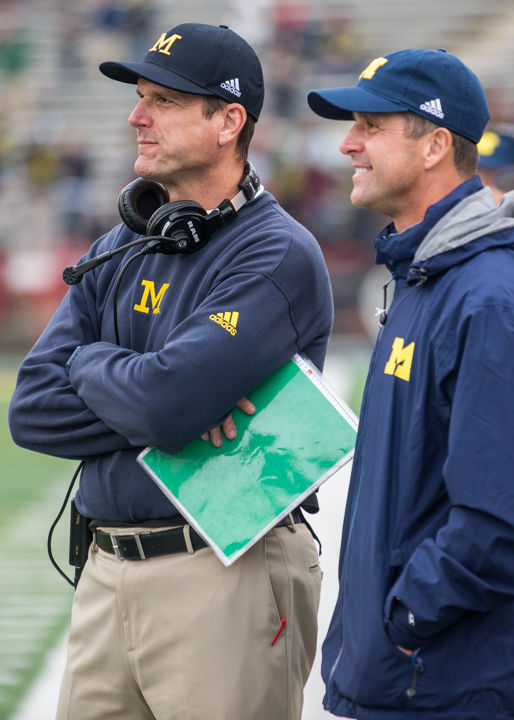 Michigan coach Jim Harbaugh (left) and his brother John (right), the Baltimore Ravens coach, look on during the Wolverines 28-0 win over the Terps at Byrd Stadium on Oct. 3, 2015.

Michigan coach Jim Harbaugh (left) and his brother John (right), the Baltimore Ravens coach, look on during the Wolverines 28-0 win over the Terps at Byrd Stadium on Oct. 3, 2015.

Saturday was a brotherly affair for No. 22 Michigan.

Baltimore Ravens coach John Harbaugh was on the Wolverines’ sideline and watched his brother, Jim, lead the Wolverines to a 28-0 victory over the Terrapins football team at Byrd Stadium.

“It is an honor to be on the sidelines with him,” said Jim, in his first year with Michigan. “I think everybody felt that way.”

Before Saturday, John and Jim had been on opposing sidelines before. In Super Bowl XLVII, nicknamed the “Harbaugh Bowl,” the Ravens and San Francisco 49ers, led by Jim, played each other. The Ravens won 34-31.

After the game, the Wolverines talked to John in the locker room, and he got to know his brother’s team better.

“He gave really good input during the game,” Jim said. “It was great to have him there at the ballgame. I think it’s cool for our players. They really liked it.”