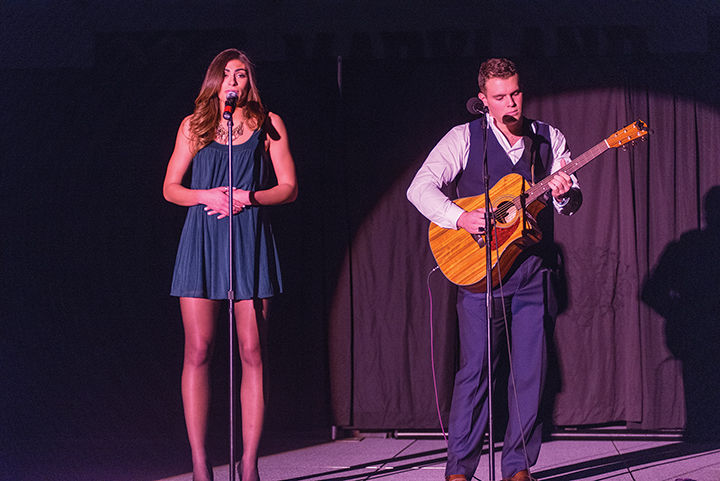 Alexandra Cimino and Patrick Cole perform "I Want You Back" at the Terps Got Talent Show in the Xfinity Pavilion on Thursday, Dec. 4.

Alexandra Cimino and Patrick Cole perform “I Want You Back” at the Terps Got Talent Show in the Xfinity Pavilion on Thursday, Dec. 4.

Sophomore Alexandra Cimino, a hurdler, hasn’t spent all of her favorite moments in college on the track. She’s spent some of them listening to senior Patrick Cole play guitar.

His guitar and Cimino’s voice helped the duo from the Terrapins men’s and women’s track and field teams win the second annual Terps Got Talent Student-Athlete Talent Show on Thursday night at Xfinity Pavilion.

Cole, a hammer thrower for the Terps, first reached out to Cimino when she was a senior at Westwood High School in New Jersey. Cole, then a sophomore at this university, had graduated from Hasbrouck Heights High School, about 15 minutes away. The two knew of each other after competing at the same track meets.

Fast forward a couple years, and they have been dating for about a year, largely thanks to Cole’s guitar.

“Before we were dating, my attempt at wooing her was playing guitar,” Cole said. “That was my shtick.”

They met for the first time during Cimino’s visit to this university. Cole, who reached out to the hurdler, showed her around.

“On her visit, she told me that she plays [guitar] and she sang,” Cole said. “When she came as a freshman, I was interested in her, obviously, and we kind of just started playing. I had my guitar in my room so we would pass it back and forth and play and have a good time.”

The two performed an acoustic version of The Jackson 5’s “I Want You Back,” a song they have been working on since the summer. As they continued playing together, they began to learn different songs, and Cimino taught Cole how to harmonize.

“I’ve been singing for a while,” said Cimino, who also plays piano. “When I was younger, I sang the National Anthem at minor league baseball games, and I would sing [the National Anthem] at all the school events.”

Though both Cimino and Cole have played guitar since age 13, they were nervous for Thursday night’s performance on a different stage to which they are accustomed.

“It’s so different; I can’t even compare the two,” Cimino said. “Everyone was saying, ‘It’s just like running hurdles!’ It’s not whatsoever.”

Dani Kram, a senior on the Terps gymnastics team who organized the event as the Student Athletic Advisory Committee president, lived next door to Cole their freshman year.

“Pat and I have been really good friends all four years here, and I’ve gotten to know Alex a little bit through him,” Kram said. “They were absolutely incredibly [tonight]. I think I was ready to cry a little bit. I thought it was just very endearing and very nice and sounded amazing.”

Last year’s winners of the talent show, Jordan Simmons and Noella Anyangwe of the women’s track and field team, were invited to perform at the Terp Awards, the university athletic department’s awards show.

“That will probably be the next time anyone sees us or hears from us,” Cole said. “We’ll be sure to be rehearsed and ready for that one, too.”