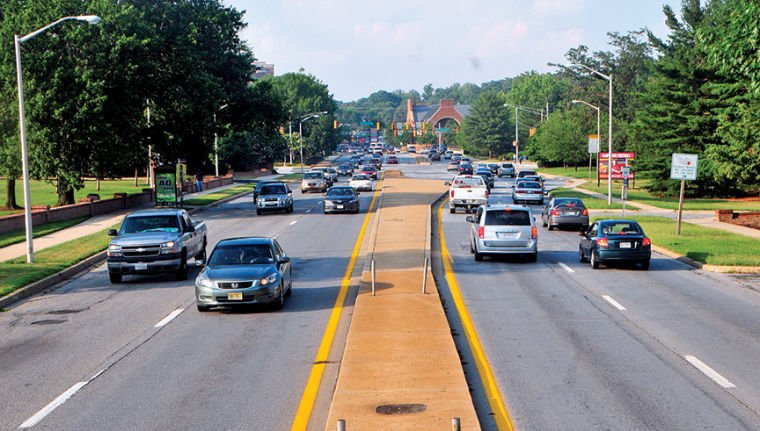 State officials are inching closer to unclogging College Park’s main artery as a plan to reconstruct a stretch of Route 1 moves into engineering and design.

The State Highway Administration has dedicated $8.8 million dollars to the project, which will map out renovations to 2.6 miles of Route 1 spanning from College Avenue to state Route 193. While the agency decided during the planning phase it would add a median, bike lanes and sidewalks to the road, the project then stalled for several years due to a lack of funding, and officials are not optimistic this next step will move more quickly.

Renovations will eventually stretch to Interstate 95, but members of the State Highway Administration decided to modify the project when they realized funding was tight.

“This project has been talked about and technically on the books for a long time,” nearing a decade, said Terry Schum, the city’s planning director. “What’s kept it from moving forward is the fact that the state does not have funding to move it forward.”

The $8.8 million should sustain the engineering and design costs until 2015, said Christopher S. Bishop, State Highway Administration community liaison for District 3, but the project could stretch on for longer. Additionally, there is not yet a timeline for beginning the next phase, during which the state will purchase the land needed near Route 1 to start construction.

Meanwhile, officials will deal with their share of challenges over the next two years. In one aspect of the design phase, which is now underway, engineers are estimating how much underground utilities would cost, Bishop said. While burying electrical wiring and other utilities helps prevent power outages, it’s “pretty cost-prohibitive,” he said, and the city would have to pay out of its own pocket.

“Utility poles, you know, they just don’t really look that nice,” he said. “It’s making more and more sense for communities like College Park to underground their utilities.”

The city has already talked to developers along Route 1 in the hopes of securing funding, Fellows said, adding the city could potentially turn to the county for help.

More than five years ago, the State Highway Administration finalized plans for the corridor’s renovations, then estimated to cost $110 million. However, the project hit a wall when the state couldn’t come up with the money to move it forward, Schum said, and officials decided to split up its completion into four smaller segments.

“That frustrated everybody,” Schum added.

There is no total budget for completing the project, Bishop said.

Engineering and design should cause minimal disruptions in the area surrounding the campus, Schum said. However, some business owners said they’re concerned about how they will fare once construction comes to the city.

Peter Casazza, owner of Big Planet Comics, is celebrating his 30th year of open in Terrapin Station on Route 1. While business is doing well, he said he’s worried he and other shop owners will struggle to bring in a steady flow of customers if construction lags.

“If there’s a massive construction problem, it’s going to kill business and affect traffic in a huge way,” Casazza said. “It may be good for everybody, but in the meantime, a lot of business could go under while they are waiting to finish this.”

Because Route 1 is the “main street” of College Park, said District 1 City Councilman Fazlul Kabir, any renovations would simply benefit the city.

“It has some issues like traffic, and this will change the landscape, change the look of the city,” Kabir said.

In the meantime, students who have to cross the road to shop or return home will continue to brave busy intersections, said sophomore mechanical engineering major Sean Creel. Many students put themselves in danger by resorting to jaywalking, he added.

“Seeing as about 50 percent of the student population decides to maybe go out to Route 1 on the weekends, I’m pretty sure it will have an effect on everyone,” Creel said.

The city plans to hold a meeting with different stakeholders, including the university, in early April to review plans for the renovation and the process going forward, Schum said.