Making a homemade meal in a hurry with cheese omelet quesadillas 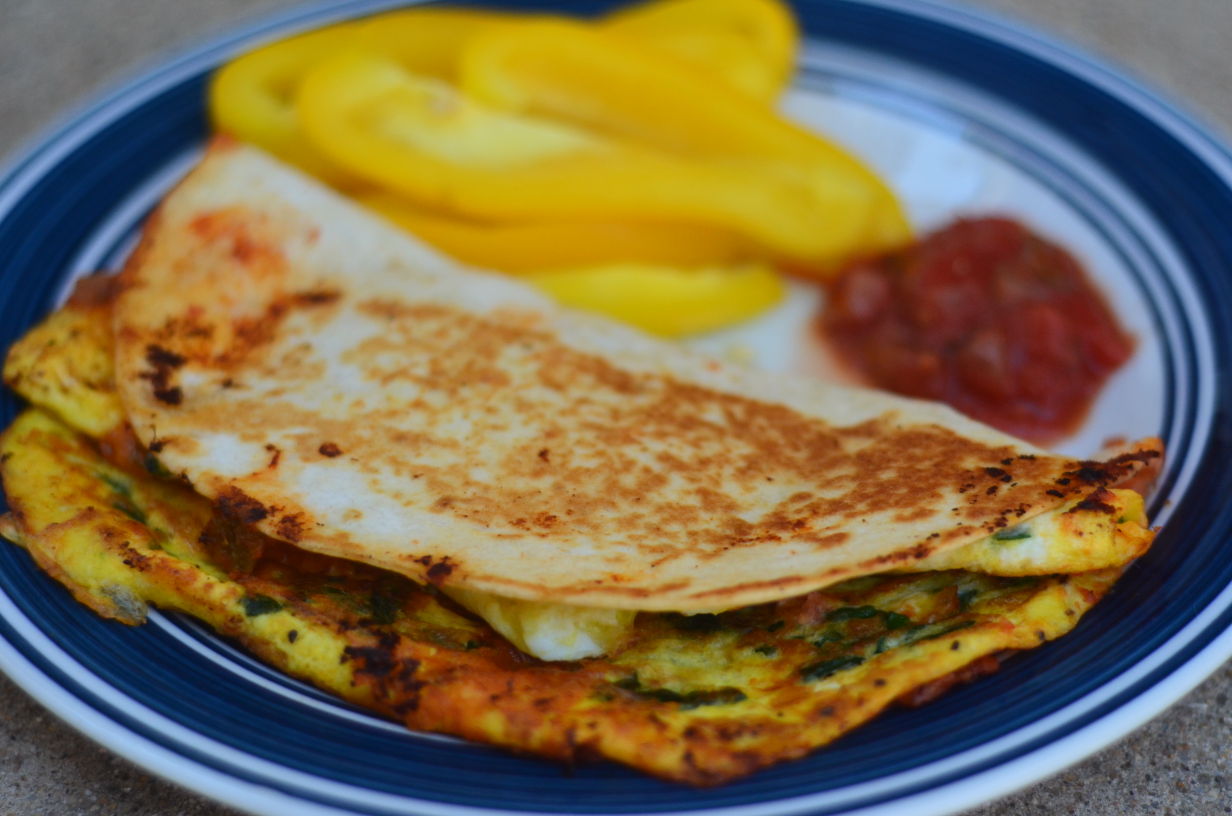 As a student hoping to eat more exciting foods than ramen and Celeste pizza, I try to cook a lot of my meals. But as a student with classes, projects, homework and a job, I also hit points where I value sleep more than good eats.

So I got excited when I stumbled across Brent Garell’s College Recipe Cafe website. Garell specializes in student-friendly cooking, and his latest cookbook focuses on cheap, 15-minute meals. Sounds doable for lunch between classes, right? I decided to put the time limit to the test by whipping up a 10-Minute Cheese Omelet Quesadilla.

I had all the ingredients on hand except a pack of tortillas and a jar of salsa. I bought those for $4 each from Commons Shop (Seriously, guys, just shop at a real grocery store; these prices are obscene). The quesadilla turned out crisp, eggy, spicy, cheesy and generally freaking awesome. I have just a couple of suggestions to help your version be even faster and not as messy as mine was.

First: Add veggies. I didn’t have the required onion, so I used spinach, hoping that a healthy ingredient might cancel out the amount of cheese involved. Any somewhat-flat veggie will probably work well in this recipe.

Second: Be decisive about The Great Egg Flip. After pouring your omelet ingredients into a frying pan, you will use the pan to flip the half-cooked omelet over. You should know that flipping an omelet is not unlike casting an Unforgivable Curse (CC Harry Potter fans). You have to really mean it. I was too timid and didn’t manage a full flip, which made the finished omelet kind of lopsided and awkward to handle.

Third: Go hard or go home with the cheese. The recipe calls for ¼ cup, which adds great flavor, but the cheese also glues the tortilla to the egg in the end. Don’t be afraid to use extra.

Fourth: Lay off the salsa. If you use a whole ¼ cup after flipping the omelet, as per the instructions, your quesadilla is likely to get a bit soggy and slippery from all the liquid. Use half as much at this step and either put the extra on the side, or stir it into the initial omelet mixture so you still get the flavor.

Ten minutes is a little ambitious for the average student. For me, following the original instructions resulted in 8 minutes of prep time and 8 minutes of cook time. Overall, I’d budget 20 minutes in the kitchen, assuming you’re an awesome roommate who immediately washes your dishes. (Does this apply to me? … I plead the fifth.)

That said, this quesadilla is completely worth it, and those extra 10 minutes can do double-duty: With this recipe, cook time mostly equals down time. I used the spare seconds to slice up a bell pepper for a side dish. You could also use the time to Instagram your creation-in-progress. You know, #amcooking. You’re cool like that.