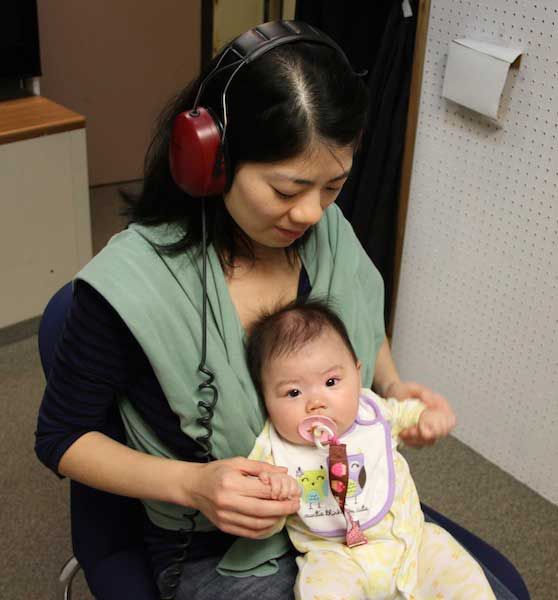 A mother and child involved in a language development study interact while under observation by University of Maryland researchers.

A mother and child involved in a language development study interact while under observation by University of Maryland researchers.

When listening to someone speak a foreign language, the words can seem to run together. To understand the language, a person must learn to identify the breaks between individual words in a stream of speech.

This is also how babies learn language.

Two researchers from this university’s hearing and speech sciences department studied more than 120 families to investigate how certain behaviors impact language development in young children. Their findings were published in a paper in the Journal of Child Language in August.

“Parents are always looking for tips, looking around for advice on how to make their babies smarter,” said Nan Bernstein Ratner, a hearing and speech sciences professor and co-author of the study. “Now we can better advise these parents on the kinds of interactions they should try to have with their babies.”

The goal of the study was to examine both how parents, specifically mothers, spoke to their children to see if certain behaviors had an impact on children’s language learning and to investigate the abilities children bring to language development, said Rochelle Newman, hearing and speech sciences department chairwoman.

Researchers tracked children from 7 months to 2 years and evaluated interactions with their mothers, with results showing that traits in both parties could affect how babies learned language.

Some babies demonstrated an early ability to differentiate between words, Newman said, which helped them learn more quickly. And while parents have always been told that talking a lot to their babies and using many different words helps build language skills, Ratner said, they found that repetition of words is crucial.

Newman said the study showed that children with parents who repeated words in this way demonstrated better language outcomes at age 2. And children who demonstrated an ability to identify individual words in speech early on displayed better outcomes later on as well, she said.

This is the first study that has looked at, on a large scale, both what skills a child brings to language development and at the influence of a parent’s behaviors on their child’s progress, Newman said.

“We figured while we had these families, why not look at both the parents and the kids? … After all, babies aren’t going to drive themselves to the clinic,” Ratner said. “It’s interesting because we can look at an 8-month-old and now make an educated guess about where they’ll be at 2 years in terms of language abilities.”

Colin Phillips, a linguistics professor not involved with this study, said this research could have practical uses, especially for parents and caregivers raising children.

“Research like this looks at what do kids actually do with what you say to them,” Phillips said. “The more detail and understanding we have of the link between parents and kids in terms of language development, the more specific, practical advice we can give.”

Ratner said information from the study could be used to counsel parents on how to successfully develop their child’s language skills.

“We can tell parents they should continue to talk a lot around their children, but if they want them to learn, it’s not just about the number of words they’re saying, but the repetition of words that is really important,” she said.

This research could also be used to help predict whether children will need extra help developing language skills, Newman said.

“We could identify children at an earlier age who might be at greater risk for language development issues,” she said. “We could test them as infants and get a sense of whether they’re going to be a child that needs intervention or not.”