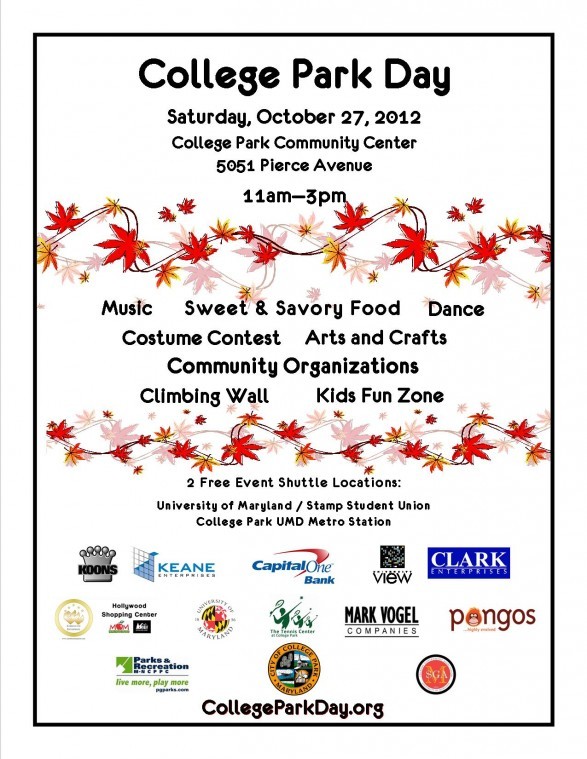 Editor’s note: This article incorrectly stated Gloria Aparicio’s title and the origin of College Park Day. Aparicio works for the university and Fazlul Kabir helped found the first event. The article has been changed to reflect these corrections.

While a flood of voters backed up traffic for about a mile, it did not stop hundreds of community members from gathering to meet students and enjoy themselves at the third annual College Park Day.

With the College Park Community Center hosting both early voting and College Park Day festivities this past Saturday, several visitors had a difficult time reaching the event. The Shuttle-UM bus scheduled to transport students to and from the festival was delayed, and university President Wallace Loh could not make it to the event due to the traffic.

“It’s good and it’s bad,” event manager Denis Seifried said. “It’s good because it’s awesome people are coming out and taking part in the political process and voting, but it’s bad because the traffic is backed up and people are having trouble getting into the event.”

However, university Director of Community Engagement Gloria Aparicio said heavy voter turnout may have also given the event more exposure.

“I’m sure some of the early voters will come out and see the tables and want to check out what’s going on,” Aparicio said.

“The students are a big part of the city,” said District 1 Councilman Fazlul Kabir, who helped found the first College Park Day to help bridge the gap between the campus and the local community. “There’s been a disconnect between the long-term residents and the students. We need to bring these two groups together.”

Student bands 93 Buick and Supermoon and university acapella group The Generics were among the performers at the festival.

“Having a great community is important to the college,” Aparicio said. “I wanted to give students the chance to prove they’re more than just partiers.”

As in previous years, few students actually showed up for the event, and several said better publicity may have increased turnout. However, students who attended said they enjoyed meeting members of the local community.

“I think it’s important for students to come together with the residents,” senior architecture major Alex Comas said. “People always talk about how the city doesn’t get along with the students.”

“I’ve never been to that part of College Park. That connection is necessary,” Mellen said. “Advertising the event better would be a good thing. It’s a great event.”

“It’s important to have avenues where people to meet their neighbors,” District 1 Councilman Patrick Wojahn said.