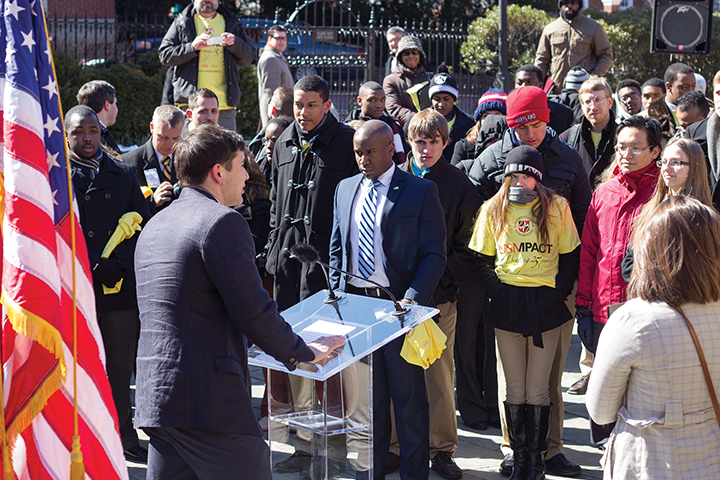 University students united in Annapolis with students from other colleges across the state to rally against rising budget cuts to higher education as part of the University System of Maryland’s Lobby Day on Friday.

“We are joined here together to keep higher education affordable, accessible and of the highest quality possible,” Antoine Battle, an international business student and president of The Universities at Shady Grove Student Council, said after leading the crowd in chanting “college affordability.”

Gathered in Lawyers’ Mall, across the street from the Statehouse, Lt. Gov. Anthony Brown and several members of state government and the university system met with student leaders from this university, Salisbury University and the University of Baltimore.

Brown told the students about his father, who escaped poverty in Kingston, Jamaica, with the help of higher education. The proposed cuts would harm colleges greatly when the state government should be trying to help, he said.

“We are going to be increasing the number of scholarships and focus more on need-based scholarships,” Brown said. “Every child deserves access to college regardless of their financial position.”

About 21 students from this university attended the 45-minute rally to protest the legislature’s proposed $7 million cut to the system’s 2015 fiscal year budget, potentially forcing universities in this state to raise tuition by 5 percent to compensate, according to Student Government Association student affairs vice president Josh Ratner.

“We hope to make it known that every penny the government gives to us is needed,” Ratner said.

Ratner and other rally attendees said they supported a less harsh budget proposal by Gov. Martin O’Malley that would cut less money from colleges and raise tuition by about 3 percent.

“Even though that $7.6 million is spread out over all USM schools, any budget cuts will affect the quality of education at Maryland,” said SGA President Samantha Zwerling. “We can’t afford that if want to keep improving our school.”

University President Wallace Loh also attended the rally in support of the students and later testified alongside Zwerling.

“It shows great commitment … that these students are coming out in 23 degree weather to rally,” he said. “When I speak, it is part of my job, but when they speak to legislators, they do it out of passion.”

David Colon-Cabrera, president of this university’s Graduate Student Government, agreed with the rally’s message but wanted to see more discussion about graduate school tuition. Over the past years, tuition raises for graduate school have averaged about 4 to 5 percent, he said.

“So many graduate students are affected from the same college affordability problems undergrads face, but we still have different needs,” he said.

After the rally, participating students spoke to delegates in the General Assembly to voice their concerns about rising tuition. While no students from this university lobbied the legislators directly, SGA governmental affairs director Lindsey Anderson, a senior English and government and politics major, said students also spoke to their delegates last week at Terrapin Pride Day.

Students will have another chance Wednesday to talk to legislators in Annapolis for the SGA’s Ice Cream Day.