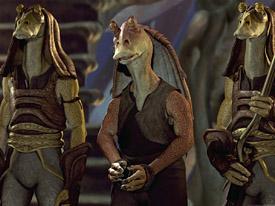 George Lucas, creator of the Star Wars saga, has messed with the wrong Sith Lord.

For many, the original Star Wars trilogy is seen as moviemaking at its finest, a perfect masterpiece. That sentiment has apparently never registered with creator George Lucas who, since the 20th anniversary re-release of the films in 1997, cannot stop tinkering with what is considered his greatest achievement.

For years, Lucas has been manipulating cuts of the old films, upgrading special effects, altering dialogue and replacing actors with CGI “special edition” versions, which has stirred up a great deal of controversy over the years. So what’s the latest drama that has fans’ lightsabers all in a twist?

It’s the very odd — and almost comical — changes he made for the Blu-ray re-release titled Star Wars: The Complete Saga.

In the upcoming edition of the films, out Friday, the changes range from a CGI Yoda to digitally-altered light sabers. The most notable change, though, is in Return of the Jedi, when Darth Vader now shouts an Anakin-esque “Noooo!” during an epic battle, causing purists to scream sacrilege.

If this entire situation wasn’t already peculiar, in 1988 Lucas stood before the U.S. Congress and argued in favor of retaining classic films in their original forms. His part in the debate helped create the National Film Registry, an organization that takes historically significant films and preserves them. That Lucas seems light-years away from the Lucas of today — the one who continuously modifies his ever-popular classics.

Although fans of the series have vehemently expressed their outrage, nothing will deter Lucas from what he believes is his quest for perfection. In all sincerity, Lucas truly feels as though he is improving these films, despite the negative reactions.

While it’s true that the special effects used in the originals cannot stand up against the technology available today, there is something to be said about a film that is indicative of the time in which it was created. Still, Lucas’s unapologetic manner towards the backlash from this recent change serves as a warning that more alterations are to come.

Until then, all fans can do is wait and hope that next time, Lucas will let sleeping dogs lie and leave the galaxy far, far away in peace.