A night at the Observatory 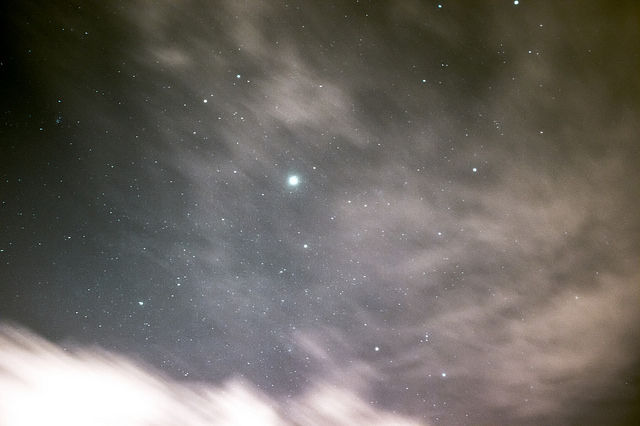 One of the most disappointing parts of taking an introduction to astronomy course was that the class didn’t take place at night. My classmates and I spent hours in lecture learning about the stars and constellations, but when we emerged from the lecture hall, we were greeted by the oppressive midday sunlight. We only saw the heavenly bodies in photos from our textbooks or lecture slides — or if we were lucky enough to spot some stars through the hazy glow radiating off Route 1.

However, the university offers students a chance to get a close view of the night sky, even though few students outside of the astronomy major are likely to take advantage of it. The University of Maryland Observatory is not very far from the campus. It opens its doors twice a month for open houses, which feature lectures on a variety of astronomy-related topics and the chance for visitors to use the observatory’s telescopes.

I realized that I had picked an unfortunately chilly night to suddenly develop a burning desire to learn more about the night sky when I turned off Metzerott Road and into the observatory’s driveway for the open house Thursday. When I finished following the eerie red lights and pulled into a parking spot, my dashboard thermometer reported that is was only 22 degrees. The observatory’s website had warned that the telescopes were outside, so I was wearing more than three layers. I couldn’t wait for the observations, which would occur later in the evening.

The light coming from the lecture hall was inviting, and the room was more crowded than I expected — slightly less than 30 people. While there appeared to only be a handful of undergraduates present, there were quite a few older members of the College Park community, as well as families. Several young boys were exclaiming loudly as they leafed through old astronomy magazines.

Elizabeth Warner, a faculty research assistant and the observatory’s coordinator, gave the presentation for the evening on major comets that would be visible from Earth in 2015. The presentation was easy to follow, even though I only had a beginner’s understanding of astronomy. The audience clearly had a mixed experience with the subject as well, but the presentation still managed to hold everyone’s attention. While the children were learning about what made “icy dirtballs” visible in the night sky from Earth, the adults were eager to learn more about the Rosetta mission, which had allowed the Philae probe to land on comet Churyumov-Gerasimenko back in November.

Despite the bitter cold, I couldn’t wait to look through the telescopes. Bundling up, the audience in the lecture hall moved as a pack over to the observatory building. After walking through the office, we stood on a deck-like structure with five telescopes.

We learned from one of the student assistants that one of the larger telescopes was built in 1961 and used to look for Soviet spy satellites during the Cold War. NASA donated the telescope to the observatory, and it was fixed on Comet Lovejoy, which is heading away from Earth. Later in the evening, the telescope was focused on the moon, and though it was an older telescope, its view of the full moon was immaculate, with every ridge and crater clear as the photos in my textbook.

Another newer telescope was focused on Jupiter. Even without a telescope, it was bright in the sky, but when viewed through the telescope, its moons were also visible. Though I’m not very good at remembering constellations, it was hard to miss Orion, which stood out in the clear sky. Even more impressive was the view from the telescope. Looking through another telescope, I could see the blue dust of the Orion Nebula, thousands of light-years away. My jaw dropped at that sight; I couldn’t believe I was actually seeing a nebula with my own eyes.

Though I couldn’t feel my fingers or toes by the end of the night, it was an astonishing experience to actually see the comets and planets I had learned so much about in ASTR101. With all the lights on and around campus, it is often easy to forget how beautiful the night sky can be. However, even without looking through the telescopes, the observatory was an oasis of darkness with a clear view of the night sky. A trip to the observatory would be a wonderful retreat for any student, especially those who need a reminder just how lovely the night can be.