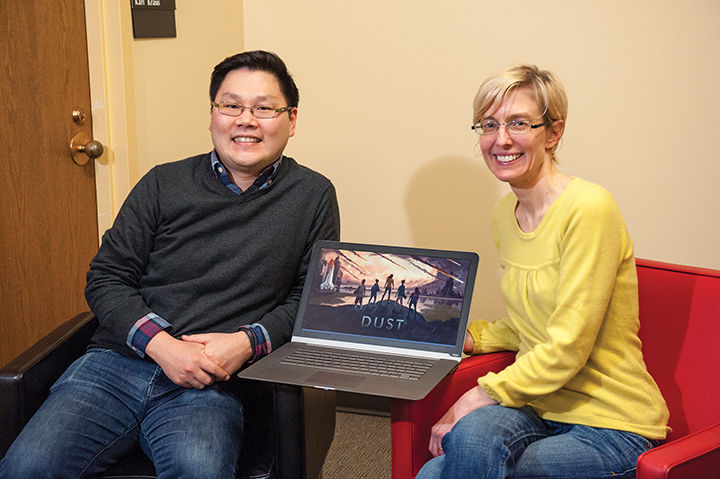 Researchers June Ahn (left) and Kari Kraus (right) worked to design Dust, an alternate reality game which teaches STEM skills and is aimed at girls and minorities in their early teens. Above, they pose for a portrait on February 11, 2015 in Hornbake Library.

Researchers June Ahn (left) and Kari Kraus (right) worked to design Dust, an alternate reality game which teaches STEM skills and is aimed at girls and minorities in their early teens. Above, they pose for a portrait on February 11, 2015 in Hornbake Library.

A recently created virtual game takes place after a meteor shower, when adults on Earth lose consciousness and teen scientists must work to find a way to reverse the apocalyptic event.

That’s the premise behind DUST, the alternate-reality game designed and developed by information studies college researchers Kari Kraus and June Ahn. The team behind the project released the game Jan. 26.

“The dust disperses and all the adults have collapsed. That’s how the game opened,” Kraus said. “And that’s the mystery that players must now solve: What happened, are they asleep, are they in a coma, how can they be revived?”

DUST is a game designed to help teens ages 13 through 17 develop science, technology, engineering and mathematics skills, Kraus said. Players interact with virtual characters, search for clues, post in conversations about game theories and questions and use the scientific inquiry process to solve a mystery.

The game is a virtual seven-week experience, but players can join the virtual reality whenever they want.

Developed with the help of a $445,231 National Science Foundation grant, the game already has about 1,155 players.

The game experience aims to gather data about the players and promote STEM learning in an informal, interactive setting, said Ahn, a professor in the education college.

“When you typically think about education research, we think about how we need to make changes to schools and classrooms, but [the NSF] is funding us to do something more out-there and innovative,” Ahn said. “We are looking at how we can promote learning through stories and apps and social media and expanding our notion of learning from just inside the classroom to everywhere.”

Ahn and Kraus partnered with several people and organizations on this project, such as undergraduate students, Brigham Young University researcher Derek Hansen and doctoral candidates in the information studies college, including Tony Pellicone and Beth Bonsignore. The team helped design the game, develop the storyline and provide ideas for game features.

Pellicone said he has been helping craft the narrative for the game and is working as a gamerunner, guiding players through a number of scientific practices while helping them formulate theories or find solutions.

The 11 main characters in the game already have developed backstories and roles, Ahn said, but the game offers people the opportunity to play and add to the storyline.

DUST gives players who might not consider themselves proficient in STEM fields — especially groups often underrepresented in STEM fields, such as women and minorities — the chance to embrace scientific learning in a fun environment.

“By involving players directly in the narrative, and helping them to actively solve the problems that we’ve posed for them, we’re hoping to help them develop identities as people who do science and to spur continued engagement with these topics,” Pellicone said.

Though STEM skills are not the creators’ specialty, either, Kraus said her interest in the project was spurred by the opportunity to see whether this type of game could be transformed from entertainment to education platforms.

Ahn said the most challenging part of developing the game was figuring out how to keep a teen audience engaged. He said it requires more continuous monitoring and interaction than he expected.

“Most [alternate reality games] in the past have been designed for adult populations, and what we’re finding with the teen population is you have to think more carefully about guiding their experience,” Ahn said.

For the next game project — the grant being for two — the team might consider an intergenerational format, which could allow older players to help model the process and guide young players through the game, Kraus said.

“It has been the most fun and challenging and exhausting thing I’ve ever worked on,” Kraus said. “It’s great.”

CORRECTION: A previous version of this story and the headline referred to DUST as a video game, but it is known as an alternate reality game. This article has been updated.