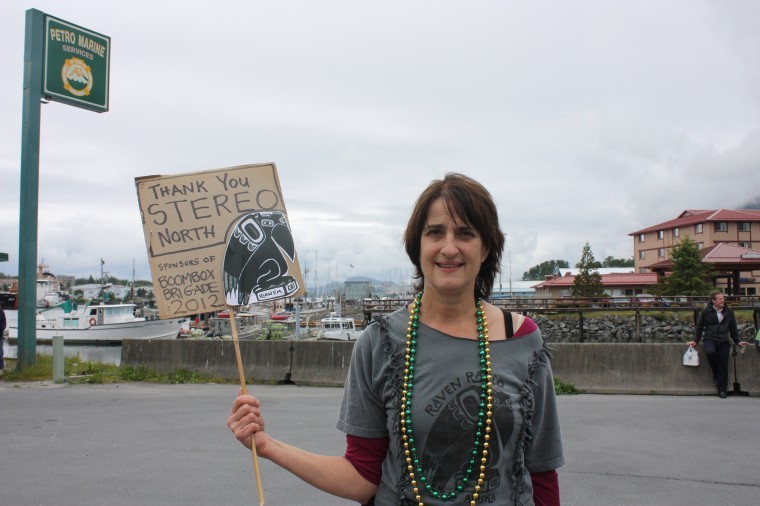 Marika Partridge’s former radio station in Sitka, Alaska, celebrated its 30-year anniversary in July, with a parade where staff thanked all their supporters.

Marika Partridge’s former radio station in Sitka, Alaska, celebrated its 30-year anniversary in July, with a parade where staff thanked all their supporters.

“My name is Little Miss Muffet, and I’ll be bringing out the hidden surprises in my LP collection.”

Marika Partridge passed the iPhone to a man seated to her right with an encouraging smile. The rules were simple: State your DJ name and a description of your show. No skipped introductions allowed.

The man identified himself as DJ Rocket Johnson, and the phone continued around the table, finally reaching the woman to Partridge’s left, at the end of the group of people.

“This is DJ OJ, coming atcha every morning for your morning’s fresh squeeze,” the woman said in her best low and smooth radio voice.

This exercise — of average citizens adopting DJ personas — was just a sample of a larger project Partridge is leading called “Takoma Radio.” Her goal? To get a hyperlocal, low-power FM radio station on the air in Takoma Park and put DJ power in the hands of the residents.

“We want something new for us,” she said. “Not the same kind of voice you hear on the radio.”

Low-power FM, or LPFM, broadcasts in a much smaller radius than commercial radio, with about a three- to five-mile range.

In 2011, President Obama officially signed the Local Community Radio Act. This legislation allowed for an increased number of LPFM stations across the country, according to the website for the Prometheus Radio Project, an organization which has been helping Partridge through the process of getting a station.

The Federal Communications Commission only takes applications for these stations during a certain short window of time and has not announced when the next dates for filing will be, but Prometheus expects that window to be open in the spring of 2013, given past FCC trends.

Partridge plans to be ready.

She got her start in community radio while living in Alaska. Her father was in the navy, and her family traveled all over the world, eventually moving to Juneau. In 1982, Partridge helped found a community radio station in Sitka called Raven Radio, which reached an audience of about 5,000 to 7,000 people.

She later moved to Takoma Park to work for NPR. In 2001, she left the station, but her passion for radio remained alive.

In June 2011, Partridge was at a cocktail party at the Silver Spring civic center when a fellow partygoer told her about LPFM opportunities.

Partridge decided to try to establish a Takoma show, and just one month later, she began monthly community meetings.

More than a year has passed since Partridge began preparing. Takoma Radio has partnered with Art For the People, a Takoma-based non-profit organization, and raised almost $4,500. Though applying for a show is free of charge, Takoma Radio will need at least $10,000 to pay for equipment, engineers and rental fees for a studio and antenna, among other things.

On Oct. 1, Partridge held her monthly meeting with a small group of volunteers who have been involved in the project and discussed new ways of fundraising, including events at local venues and restaurants. The youngest two in the group hail from nearby Montgomery Blair High School.

Partridge plans to get as many local voices as possible on the air as she can. In the meeting, she talked about starting projects for the Takoma Radio website by having volunteer DJs go out and interview citizens, asking questions like, “What’s your first memory of Takoma Park?”

But she’s also about having fun. She said she’d love to get her parakeet on the air.

“We all need a little silly in our lives,” she said.