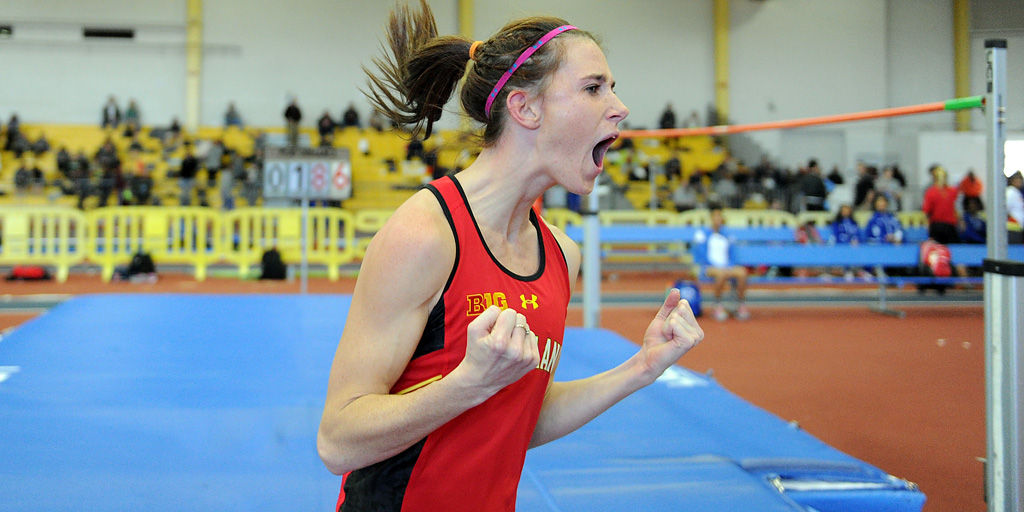 Amber Melville, among others, congratulated Thea LaFond on being named Big Ten Field Athlete of the Week earlier this month. Seven days later, on Jan. 19, LaFond returned the favor.

Aside from being named back-to-back Big Ten Field Athletes of the Week, seniors Melville and LaFond of the Terrapins women’s indoor track and field team are also both returning All-American athletes. And the two teammates have leaned on — and battled against — each other to continue their success.

“We just love competing, and we put in so much work,” LaFond said. “This is a sign that our work is not going unnoticed and we’re heading in the direction that we want to be. I’m really proud of her and really proud of us.”

The two friends even began their track and field journeys in similar fashions.

Melville, who is currently tied with Cincinnati’s Erika Hurd for the nation’s top jump of 6 feet, 1.25 inches, began jumping in sixth grade.

“I was at an elementary school play-day thing and a track coach saw me run and beat all of the other girls in the 100-meter dash and then convinced me to come out for track,” Melville said.

After the coach persuaded her, Melville tried the different track and field events and found that high jump really “clicked.” LaFond, too, enjoys high jump the most.

She began a few years after Melville as a junior in high school. Her coach, who noticed she was a good long-jumper and hurdler, let her try out high jump at her request.

With some work, her performance improved.

“He knew that I was a dancer before, so the technical parts came more naturally to me,” LaFond said. “Once I figured out that the jumps were all rhythm and pace, I was good to go.”

Another one of LaFond’s favorite events is the triple jump. It was her first-place jump of 42 feet, 5.25 inches at the Penn State Relays earlier this month that helped her become the Big Ten Field Athlete of the Week.

“[Triple jump] has almost become my baby — I like working on it,” LaFond said. “The work is never easy, and I’m always the most sore after I practice triple jump, but I guess that’s what makes it that much better.”

As seniors, both women realize that their time at this university is coming to a close. With that in mind, both have goals of making an impact this season and leaving a legacy.

Not only do they share the American studies major, but they also have the same individual goal for the high jump. Their aim is to better a mark of 6 feet, 2 inches, good enough for new school record.

“If those two ladies set the bar at 6 feet, 2 inches, we’re just going to keep pushing it and get there,” coach Andrew Valmon said. “Because of the competitive nature of both young women, someone is getting there, if not both of them.”

That competitiveness during practice has pushed each senior to improve. The in-house competition not only drives LaFond and Melville, but has also become contagious with the rest of the team.

“The young kids learn by example, and many of them come in as high school All-Americans and are pretty good,” Valmon said. “It’s good to have them [LaFond and Melville] to show what hard work can accomplish.”

With the Big Ten Championships scheduled for Feb. 27 and 28 in Geneva, Ohio, Melville and LaFond will try to continue to push one another — and their teammates — to greater heights. It’s part of the Terps’ quest to carve an imprint in their new conference even more indelible than the pair of athlete of the week awards they already accrued.

“Just because we’re the new guys doesn’t mean we’re going unseen,” LaFond said. “Taking Big Ten Field Athlete of the Week back-to-back shows that we are a force to be reckoned with. We want to go into the Big Ten with a bang.”