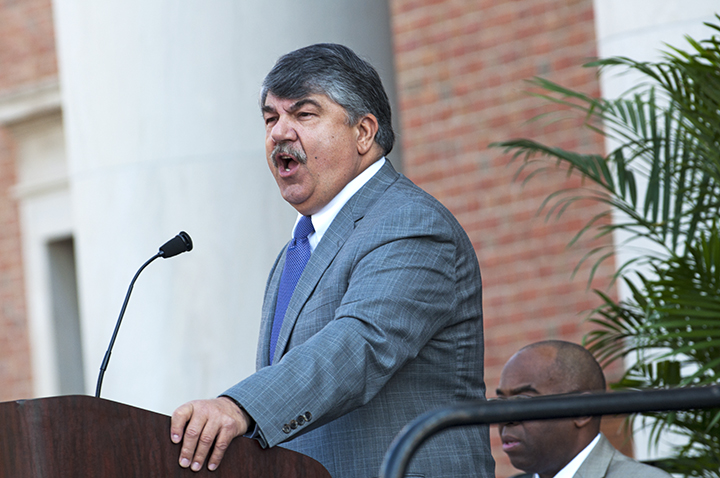 AFL-CIO President Richard Trumka addresses the history of his organization during the acceptance ceremony on October 1st in front of Hornbake Library.

AFL-CIO President Richard Trumka addresses the history of his organization during the acceptance ceremony on October 1st in front of Hornbake Library.

In the days following a massive donation of historical labor materials to the university archives, the collection is creating buzz not only on the campus, but also around the world.

Filling up six miles of shelving, the George Meany Memorial AFL-CIO Archive is the largest single donation to the university libraries ever, said Lauren Brown, manager of special collections. It is valued at $25 million and contains more than 40 million artifacts and documents ranging from campaign buttons and photographs to books and even a pair of old work boots.

The archive was curated and collected by the American Federation of Labor and Congress of Industrial Organizations, an umbrella organization for 57 U.S. labor unions that represent more than 12 million workers. It joins several other university-housed collections of labor history, making this university among the largest union research sites on the East Coast, said Patricia Steele, dean of the university libraries.

The university received the collection on Oct. 1 after it was transferred from the National Labor College in Silver Spring. Since then, history classes, as well as a researcher from Melbourne, Australia, have visited Hornbake Library to view available materials, and other departments are planning to use the archive in coursework.

“We have a number of really wonderful special collections, but I don’t think I’ve seen a buzz around anything like this on the campus,” Steele said. “Calls are coming in from all over. It’s not just historians that are interested in it — sociologists, anthropologists, people in women’s studies, gender studies, all kinds of disciplines that have an interest in labor.”

Philip Soergel, professor and history department chair, said many faculty members are interested in this aspect of American history. Recently, university researchers completed an almost 40-year-long project of editing and publishing 12 volumes of speeches, recordings and documents relating to Samuel Gompers, a labor spokesman and founder of the American Federation of Labor.

“We have a number of prominent labor historians in the department, so we were quite anxious to get [the archive],” Soergel said. “The history department has a long tradition, reaching back into the 1960s and ’70s, of having a number of specialists who study U.S. labor history.”

“There was a tremendous level of interest expressed by faculty and faculty administrators on campus, seeing if we could make this happen, which I think made the library staff even more motivated,” Brown said.

The archive’s contents date back to the 19th century, offering researchers a long chronological span of documented events and issues in American workforce history, Brown said. Some groups, such as the history department, have sent students to the library for research projects and are planning to study the collection in future courses.

The history department plans to develop a course on the labor archives for undergraduate students and appoint graduate research assistants to work in the collections. Faculty members have also discussed plans to hold a conference this month and invited labor leaders, historians and scholars to use the archive, Soergel said.

“[We’ll use] labor history as a lens for understanding what’s going on with the problems in the labor movements at the present,” Soergel said. “We hope it will be televised through something like C-SPAN, or we’ll webcast it.”

In the meantime, university archivists and librarians are working on transferring the archives and preparing documents for preservation. Some items are already available through the Maryland Room in Hornbake, but other boxes remain in commercial storage facilities or in McKeldin Library, Steele said.

The AFL-CIO collection was already well maintained and organized, Brown said, but university archivists have been digitizing materials to make them more readily available to the public, one of Steele’s ultimate goals for the special collections.

“You could get a big collection like this and put it in storage and have it beautifully preserved forever,” Steele said. “But if [people] don’t see what’s out there, then you haven’t done your job.”