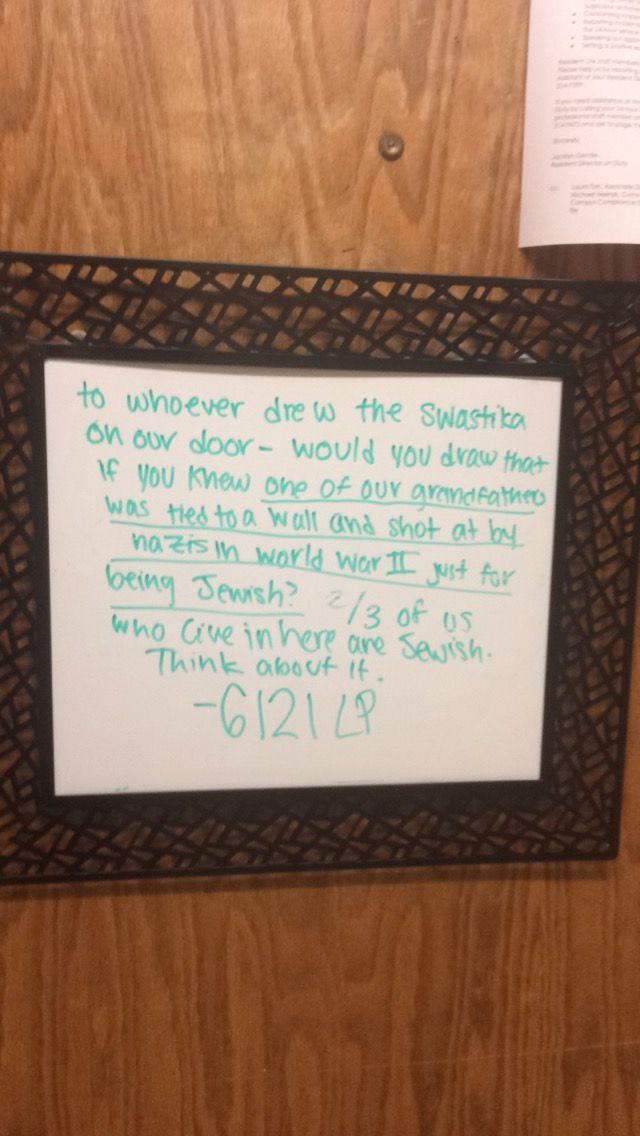 Residents write a response on a dry erase board after a swastika was drawn on it.

Residents write a response on a dry erase board after a swastika was drawn on it.

After a swastika and anti-Semitic language was drawn on three female residents’ dry erase board, a resident assistant called and met with a University Police officer on Sunday at about 5:26 p.m. in LaPlata Hall, said University Police spokesman Maj. Marc Limansky.

The RA said LaPlata Hall residents reported to her that the swastika was drawn between 10:30 a.m. and 1:30 p.m. Sunday.

The three residents of the dorm were not there when the officer arrived, but one of the three later responded to the person who drew the swastika with a message drawn on the board.

“To whoever drew the swastika on our door — would you draw that if you knew one of our grandfathers was tied to a wall and shot at by Nazis in World War II just for being Jewish? 2/3 of us who live in here are Jewish. Think about it,” the message said.

This is the third hate bias incident to occur in the past two months, according to police reports.

On Oct. 31, a swastika drawn in black marker was found on a dry erase board in Cumberland Hall, and residents reported additional swastikas on two fliers and a poster near the elevator.

LaPlata Hall residents in the same wing as the room where the swastika was drawn received a note on their doors after the incident. It notified residents of the incident and encouraged anyone with information to call University Police.

Sophomore economics major Taylor Friedman said she didn’t find out about the incident until she found the note on her door.

“My first reaction was disgust,” she said. “I said to myself, ‘maybe this is a joke,’ but then I realized I shouldn’t hope it was a joke, because it wouldn’t be funny at all.”

RAs held a floor meeting on Monday at 7 p.m. to discuss the incident, and Friedman said another meeting would take place on Tuesday.

The case is active, and University Police will continue to investigate.