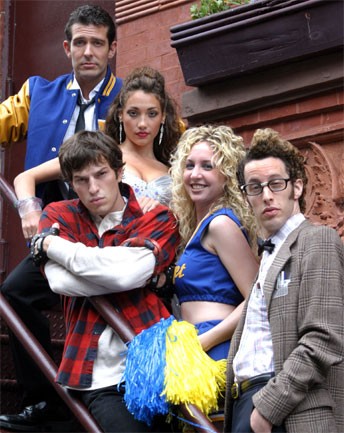 Audience members vote for the prom king and queen in The Awesome 80s Prom, an interactive musical in which 19 cast members improvise the majority of the performance.

Audience members vote for the prom king and queen in The Awesome 80s Prom, an interactive musical in which 19 cast members improvise the majority of the performance.

Ken Davenport will tell you it took him about two years to write The Awesome 80s Prom and get it onstage. But the story really began about 16 years ago.

And Davenport went to his junior prom.

Unlike the majority of prom attendees, he was lucky: Nothing mortifying took place at the dance – but nothing memorable did, either.

“It was pretty standard,” Davenport shrugs. “It was just kind of fine.”

So when he started writing The Awesome 80s Prom, which runs tomorrow through Nov. 25 in the M&T Bank Pavilion at the France-Merrick Performing Arts Center, Davenport decided this landmark high school event would be packed full of the stuff of John Hughes-movie legend: big breakups, high school social system shakeups and, naturally, really big hair and really bright makeup.

But this time around, Molly Ringwald isn’t the only one who gets to take part in the action. In The Awesome 80s Prom, audience members actually get to join in Wanaget High’s biggest party. The show, which opened about a year ago off-Broadway to nostalgia-driven enthusiastic reviews, is the latest in the “interactive musical” genre. The Baltimore company is The Awesome 80s Prom’s fourth outside of New York City, where it’s still running at Webster Hall.

Besides a few choreographed numbers and a couple of announcements by the high school’s drama teacher, the 19-person cast of The Awesome 80s Prom improvs everything, from the drama surrounding the on-again, off-again romance between the cheerleader and football player, to the Swedish exchange student’s search for a new host family.

A DJ plays the soundtrack, composed entirely of ’80s hits. Davenport admits his favorites are by Journey – “‘Don’t Stop Believin” and ‘Open Arms’ and that stuff, it’s hard to resist it.” Also included in the lineup are Bon Jovi, Cyndi Lauper, REO Speedwagon and Wham!.

“When you hear ‘Wake Me Up Before You Go Go,’ the crowd goes nuts!” he says.

Thanks to the giant dance floor, it’s not hard for the audience members to break out their best George Michael dance moves. On a set complete with cheesy flashing colored lights and awkward slow dances, the cast mingles with the crowd throughout the production – which means, sometimes, it’s a dance with a random audience member that fractures the big couple on the campus. The show’s big, reality show-style finish comes when the audience votes to elect the night’s prom king and queen. And it appears a lot of the attendees are still exorcising some high school demons.

“The captain of the football team and the cheerleader never win,” Davenport says with a laugh. “The bad boy tends to be very popular. You remember the guy in high school who would walk up there before class elections and say, ‘Vote for me’? He tends to win, just like he did in high school.”

It’s not only thirty-somethings who are reliving the glory days of Members Only jackets – although audience members are encouraged to dust off those taffeta prom gowns and dress in period costume, so to speak. Teenagers and college kids pack the performances too, even though their recollections of the 1980s likely consist of a few late-decade Nickelodeon shows and whatever the commentators discuss on VH1’s I Love the 80s.

“We’re living in a time when people want to forget what’s going on in the world and want to dress up and get crazy and party like it’s 1989,” Davenport says, noting also that nostalgia tends to manifest itself about every 20 years. “I tend to refer to [the ’80s] as the decade of guilty pleasures. It was also a very difficult political climate … Those were very intense times for kids. In our fashion and our music, we went over the top and put 12 piercings in our ears and wore really bright colors, big hair and even the music of the time was incredibly emotional. To be honest, we’re living in somewhat of a similar time.”

Not much of the serious stuff found its way into the show, save a couple of time period-appropriate references to the president and chronologically appropriate movie references. The aim has always been to make people feel good about the decade, even if it involved some of their more dorky moments.

“I was a Rubik’s Cube-obsessed kid,” Davenport says. “At lunch hour I used to go in a room in the cafeteria and we would all have contests to see how fast we could do it. Oh yeah, I was one of those kids.”