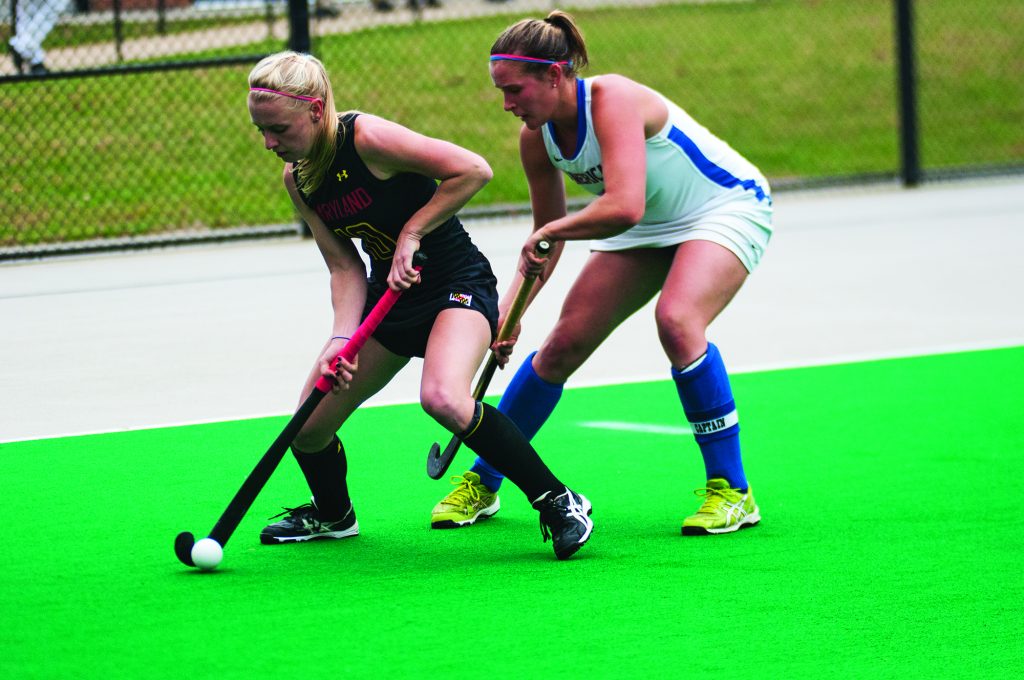 Forward Jill Witmer handles the ball during the Maryland vs. American University NCAA First Round Game on Saturday.

Former Maryland field hockey players Katie O’Donnell Bam and Jill Witmer will compete for the United States in the Rio Olympics, marking the third consecutive Olympics that at least two former Terps are on the U.S. field hockey squad.

O’Donnell Bam has been on the U.S. Senior National Team for more than a decade, starting when she was 16 years old.

Witmer, meanwhile, has worked her way up through the Team USA age groupings. She got experience on the U-19 and U-21 teams before making it to the Senior National Team in 2013. Maryland coach Missy Meharg said Witmer’s development since graduating can be explained simply by having more time dedicated to playing.

“She was exponential in her growth,” Meharg said. “When I saw her last summer I couldn’t believe how much she’d grown since College Park. That’s the difference between being a student-athlete and being a professional field hockey player.”

Janessa Pope, who graduated from Maryland in 2013 and played on the field hockey team with both O’Donnell Bam and Witmer, said she began to see Witmer’s maturation during her time at Maryland.

“She was always an amazing player, really quick and athletic with a great understanding of what to do with her body,” Pope said. “But as she grew she started to understand game tactics and the game as a whole. You watch her now and she’s evolved into a complete player.”

In 2010, O’Donnell Bam and Witmer’s only season together at Maryland, the Terps lost just one game en route to win the national title.

Since then, Pope said both players have grown into the players they are today.

“It’s really neat to see them do things in games I’ve never seen them do before,” Pope said. “They’ve come so far.”

Meharg is hardly a stranger to the Olympics herself. She was the first alternate on the U.S. Olympic team in 1988 and was a coach at the 1996 Games in Atlanta. The veteran coach sees some similarities between that 1996 team and the 2016 squad.

“We were physically fitter than the rest of the world,” Meharg said. “And I think USA is one of the top two or three teams in Rio.”

According to Pope, Meharg’s experience at the international level shows in her coaching and her former player’s success with Team USA.

Witmer will become the seventh former player under Meharg to reach the Olympics, and O’Donnell Bam will be the second — after 2001 graduate Keli Smith Puzo — to compete in two Olympics.

“It’s a huge testament to what Missy does. We come in as good players and leave as great players,” Pope said. “She holds us to a very high standard and that only makes players excel in the U.S. program.”

Meharg also credits the Maryland athletic department and her assistant coaches as having critical roles in her program and the development of her players.

“There’s a lot of universities that don’t commit [to field hockey] like Maryland does,” Meharg said. “I’m always so fortunate and grateful.”

And in Rio, that commitment will be evident on the national stage, as it has been in every Summer Olympics since 2008.

“I’m pleased to keep a tradition going where Maryland, the University of Maryland, and the D.C. and Baltimore areas are places where young women can go, get a great education and play field hockey at a high level in the Olympic games,” Meharg said.