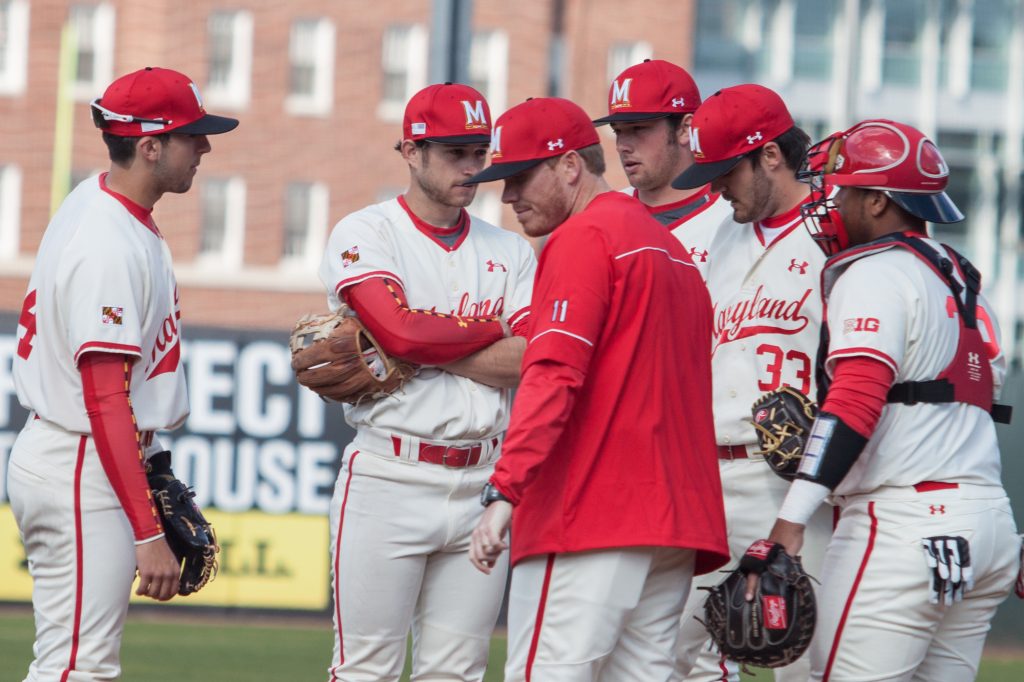 Team discusses the past inning after pitcher Kevin Mooney hit 2 different batters with a pitch during the Terps' 3-0 win against JMU at Shipley Field on April 1, 2015.

In four seasons as the Maryland baseball pitching coach, Jim Belanger has mentored 10 pitchers who became MLB draft picks. Left-hander Jimmy Reed was a sixth-round pick in 2013, and Jake Stinnett joined the Chicago Cubs as a second-round pick a year later. On June 10, right-hander Mike Shawaryn went to the Boston Red Sox in the fifth round of the 2016 MLB Draft.

But when Terps right-handers Taylor Bloom and Brian Shaffer, who appear poised to become the next class of dominant pitchers for the Terps, begin their junior campaigns this off-season, Belanger won’t assist them in improving their draft stock. Monday, Kentucky announced Belanger would join the Wildcats as their pitching coach.

“I wanted coach Belanger at Kentucky for numerous reasons,” Wildcats coach Nick Mingione said in a release. “What stood out to me was how much family means to him, the fact he’s won everywhere he’s been and his track record of player development.”

In the 2016 season, Belanger helped Bloom and Shaffer earn third-team All-Big Ten honors. Bloom finished the year with six wins, 60 strikeouts, nine walks and a 2.46 ERA. Shaffer’s ERA was higher (2.60), but his eight wins and 103.2 innings pitched were the third most in Terps history for a single season.

Shawaryn, despite struggling at times throughout the season, enjoyed immense success under Belanger’s watch, earning freshman All-American honors in 2014 and second-team All-American recognition a year later. His numbers in 2016 dipped below those of previous seasons, yet he still finished as the program leader in career wins (30) and strikeouts (307).

In the bullpen, former right-hander Kevin Mooney and left-hander Alex Robinson were dominant under Belanger’s tutelage in 2015 before moving into the professional ranks. The Minnesota Twins selected Robinson in the fifth round of that year’s draft, while Mooney went in the 15th round to the Washington Nationals.

“His player development has been second to none,” Mingione said. “What he’s been able to do with players who went undrafted out of high school and how he’s turned them into legitimate prospects and top draft picks is impressive.”

Belanger cited Mingione’s coaching ability and the strength of the SEC as reasons why he joined the Wildcats.

Terps coach John Szefc has yet to name his replacement.